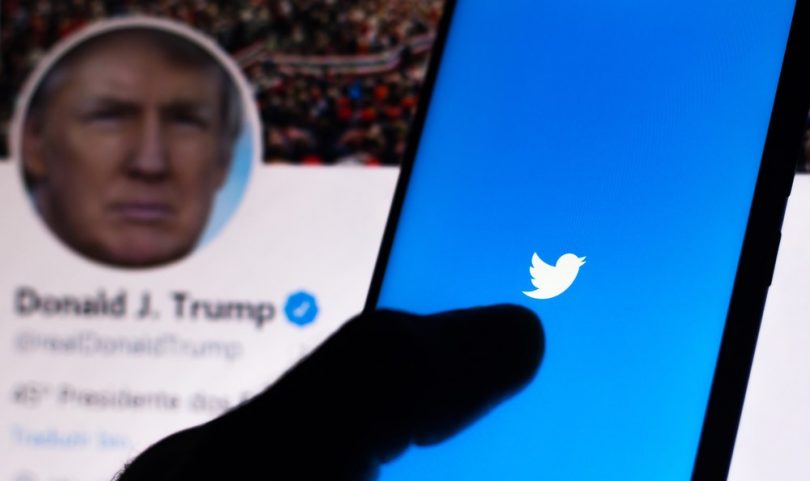 Twitter is making it perfectly clear it does not want Donald Trump’s political statements on its platform in any way, shape or form.

“Twitter suspended an account on Thursday that appeared to be circumventing its ban on former President Donald Trump by posting messages he shared on his own website,” NBC reported.

“On Thursday morning, a Twitter accounts with the handle ‘@DJTDesk’ appeared on Twitter,” the report continued. “The account’s bio section stated that the handle would be featuring ‘Posts copied from Save America on behalf of the 45th POTUS; Originally composed via DonaldJTrump/Desk’.”

“Within hours, the account was suspended,” the report added.

The development of Twitter banning some users who share Donald Trump’s statements follows upon Facebook’s decision to maintain its temporary suspension.

On Wednesday, Donald Trump lashed out at Big Tech giants that colluded to keep him from speaking to the American people on their platforms.

“What Facebook, Twitter, and Google have done is a total disgrace and an embarrassment to our Country,” Trump wrote on his new digital platform.

Although Facebook upheld Donald Trump’s suspension, the board called an indefinite suspension “inappropriate,” and directed Facebook to come up with a more “proportionate response.” Facebook argued that Trump “created an environment where a serious risk of violence was possible,” although there is no evidence that anything Trump said sparked violence for the pre-planned siege of the Capitol Building.

Meanwhile, Twitter is keeping Trump’s suspension in place permanently. The social media platform has been on a spree of banning and suppressing conservative voices beginning with the 2020 election.

Thus far, only a handful of governors are fighting back against the developing Big Tech oligarchy. Florida Governor Ron DeSantis supports a bill that would fine social media platforms for engaging in partisan censorship during elections.

“DeSantis’s state is on the verge of passing a bill he proposed that would fine social media companies for ‘willfully deplatforming’ political candidates,” Vanity Fair reported. “The bill, which passed the House and Senate last week and which DeSantis—who is seen as a 2024 presidential contender—is expected to sign, would dole out penalties of $250,000 a day for statewide candidates, and $25,000 a day for other candidates.”

Americans ranging from Trump to everyday citizens have been banned from Twitter & Facebook.@SenBryanHughes' bill in the #txlege makes this censorship illegal in TX.

I support #SB12 because it protects Texans from Big Tech's effort to silence conservative viewpoints.

“Americans ranging from Trump to everyday citizens have been banned from Twitter & Facebook,” Abbott tweeted. “@SenBryanHughes‘ bill in the #txlege makes this censorship illegal in TX. I support #SB12 because it protects Texans from Big Tech’s effort to silence conservative viewpoints.”

It appears that the only kind of “errors” Twitter makes is suspending, censoring or banning conservatives on its platform.

Trump Reacts to Facebook’s Decision to Uphold Suspension: ‘The People of Our Country Will Not Stand for It!’