As the California polls are now closed, the ‘yes’ vote on the gubernatorial recall is lagging far behind the ‘no’ votes, meaning that an avalanche of ballots in favor of Newsom’s removal cast at physical polls will be needed to overcome the substantial deficit.

“Voters are being asked two questions on the Newsom recall ballots,” Fox News reported. “The first question is whether the governor should be removed from office. If more than 50% support removing Newsom, the second question offers a list of 46 candidates running to replace the governor.”

The current AP tally of the ballots shows the ‘no’ votes ahead by over 2.5 million votes. 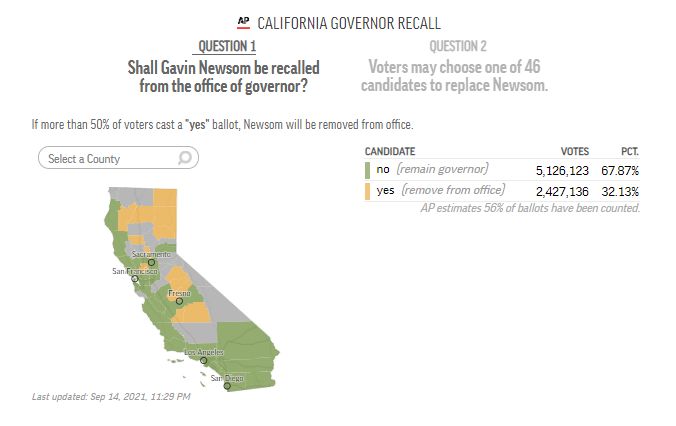 The Republican frontrunner and conservative talk radio host is remaining optimistic to the very end, pointing to the long lines at the physical polls.

“The lines are long. That’s good news for our side,” he said. “I’ve heard from people saying I’ve voted all my life, I have never seen lines like this.”

“Make sure you have your friends vote, vote, vote, and try and get 10 more friends to vote and hit every call, make every call, knock on every door, we’re gonna win this thing if we turn out the vote,” Larry Elder said this week. “The primary analytical tool used was Benford’s Law and can be readily reproduced.”

Larry Elder is appealing to California voters who detect fraudulent votes in the California recall election to file complaints with the StopCAFraud.com website.

“Statistical analyses used to detect fraud in elections held in 3rd-world nations (such as Russia, Venezuela, and Iran) have detected fraud in California resulting in Governor Gavin Newsom being reinstated as governor,” the site read, as NBC reported. “The primary analytical tool used was Benford’s Law and can be readily reproduced.”

The site says it is “Paid For By Larry Elder Ballot Measure Committee Recall Newsom Committee,” and it received major funding from Elder’s gubernatorial campaign.

The California recall election appears to have been strongly influenced by mail-in absentee ballot laws premised on the ongoing Covid pandemic. Despite increasing vaccination rates, it seems that their inability to lower infection rates means that blue states are likely to rely on them again during the 2022 mid-term elections to bolster the Democratic Party.