Canadian dictator Justin Trudeau, fresh off of unpredented attacks on Canadian citizens’ rights to bodily autonomy and freedom of travel during the Covid pandemic, is ratcheting up his plans to turn Canada into a globalist fiefdom.

On Monday, Trudeau announced that the Canadian government will “implement a national freeze on handgun ownership” and will ban “assault style” firearms.

“What this means is that it will no longer be possible to buy, sell, transfer or import handguns anywhere in Canada,” Trudeau said at a press conference. Watch:

NOW – PM Trudeau: "It will no longer be possible to buy, sell, transfer, or import handguns anywhere in Canada."pic.twitter.com/rVd5gWgEtq

The Canadian government will also implement a “red flag” law that would allow judges to force gun owners “considered a danger to themselves or others” to turn over their firearms. It will also mandate that long-gun magazines be altered to carry no more than five rounds.

“We need only look south of the border to know that if we do not take action, firmly and rapidly, it gets worse and worse and more difficult to counter,” Trudeau claimed.

“We recognize that the vast majority of gun owners use them safely and in accordance with the law, but other than using firearms for sport shooting and hunting, there is no reason anyone in Canada should need guns in their everyday lives,” Trudeau claimed.

Canadian Minister of Public Safety Marco Mendicino said there will be a mandatory buyback program for “assault-style weapons” if a bill passes the Canadian parliament. He called it Canada’s “most significant action on gun violence in a generation.”

“The first AR-15s and other assault style firearms will start to be bought back by the end of this year,” Mendicino said. “It’s going to be hard, but we’re going to get it done.”

“In April 2020, a gunman posing as a police officer went on a rampage in the Atlantic province of Nova Scotia, killing 22 people in the deadliest mass shooting in Canadian history,” Politico notes. “The tragedy prompted Trudeau to announce an immediate ban on 1,500 types of what his government calls “assault-style” weapons, including semi-automatic firearms designed to fire quickly.”

But mass school shootings are incredibly rare. If you calculate them the right way, you wind up with 13 such events since 1966. If the FBI, local police & community acted on ‘red flags’ that a subject posed a threat, such as warning signs or mental illness, you’d have even fewer.

Over 40 years, the statistics show guns don’t cause mass school shootings, but mental illness often does. There are 393 million guns in the US. Clearly, they didn’t ’cause’ 13 school mass shootings in 56 years. Most school mass shooters had prior mental health issues, however. 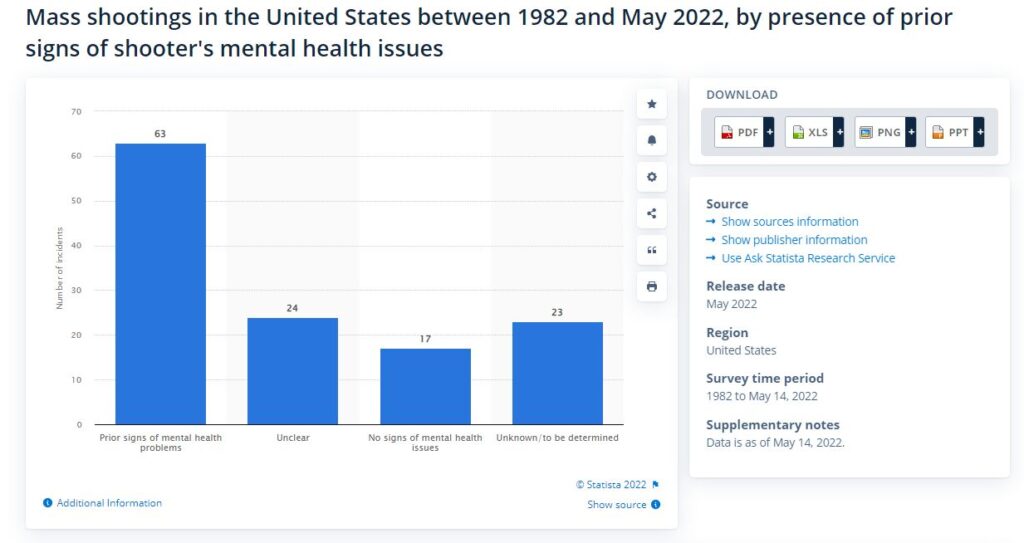 One of the problems with the mass shootings debate is gun control advocates don’t adjust for population.

As an article by gun violence expert John Lott Jr. showed in September 2020:  “The U.S. is well below the world average in terms of the number of mass public shootings, and the global increase over time has been much bigger than for the United States.”

“Over the 20 years from 1998 to 2017, our list contains 2,772 attacks and at least 5,764 shooters outside the United States and 62 attacks and 66 shooters within our country,” the article said. “By our count, the US makes up less than 1.13% of the mass public shooters, 1.77% of their murders, and 2.19% of their attacks. All these are much less than the US’s 4.6% share of the world population. Attacks in the US are not only less frequent than other countries, they are also much less deadly on average.”

“Out of the 101 countries where we have identified mass public shootings occurring, the United States ranks 66th in the per capita frequency of these attacks and 56th in the murder rate,” he added.

The Covid pandemic response should have taught the world a valuable lesson: When the citizens are disarmed, the rights violations only get worse. Canadians may feel like giving all their guns to the government will make them ‘safer,’ but the history of nations, such as Russia, Germany, and China, prove otherwise.