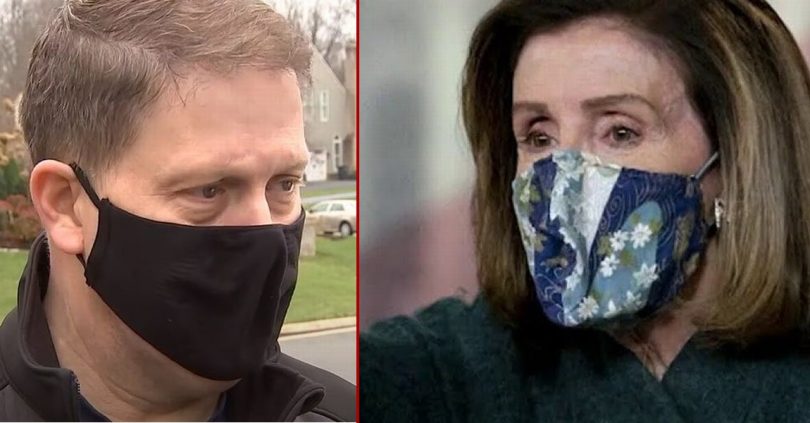 Now, his resignation letter to Speaker Nancy Pelosi has surfaced. And it is scathing. [READ THE FULL LETTER HERE.]

“Perfect hindsight does not change the fact that nothing in our collective experience or our intelligence – including intelligence provided by FBI, Secret Service, Department of Homeland Security (DHS) and D.C. Metropolitan Police (MPD) – indicated that a well-coordinated, armed assault on the Capitol might occur on Jan. 6,” Sund wrote. The letter was first obtained by the NY Times.

This intelligence, given at least three days prior to the attack, indicates that the pre-planned riot could not have been “incited” by former President Trump’s speech. Thus, impeachment claims to this point are moot and are fallacious cases of post hoc ergo propter hoc reasoning, which means “after this, therefore because of this.”

“Members of the Proud Boys, white supremacist groups, Antifa, and other extremist groups were expected to participate in the Jan. 6 event and that they may be inclined to become violent,” he wrote.

“This was very similar to the intelligence assessment of the Dec. 12, 2020, MAGA II event.” Sund says there was a “limited amount of violence and/or injuries to officers, and a limited number of arrests.”

The former Capitol Police chief said that he notified the U.S. Army five times about the danger in a local interview:

“We need boots on the ground, immediate assistance,” he said. “Right then and there, helping to form police lines and secure the foundation of the United States capitol building.”

This turned out to be the opposite of what happened, as capitol police and national guard presence was light and unusually passive as protesters had their way with the capitol building seemingly without resistance.

Speaker Pelosi demanded that Sund resign after the capitol riots, despite his repeated warnings to the Congress, the military, and the intelligence community about what was about to occur. Senator Ron Johnson is now asking questions about Pelosi’s possible knowledge of the impending attack.

“Is this another diversionary operation?” Johnson said in an interview with Maria Bartiromo. “Is this meant to deflect away from potentially what the Speaker knew and when she knew it? I don’t know, but I’m suspicious.”

It has since come out in a Time piece that there was coordination between radical agitators and a powerful “shadow campaign” operating behind the scenes to “fortify” the election. As the Time piece relates, a coalition of big tech companies, corporate giants, labor unions and influential left-wing organizations engaged in a “conspiracy” to ensure that Donald Trump would not be re-elected.

This is what was reported in the story, which spins the preparations for the election fall-out as “fortifying” democracy:

The fabricated inception of this memo was approximately nine months before the January 6th Capitol “insurrection.” More than enough time for advance warning, which would subsequently be ignored by the Congress prior to the anticipated Electoral College objections.

One of the many revelations in this pieces was that these shadowy actors told the leaders of these left-wing groups not to have a visible presence at the planned protests. While these hostile actors were reported by the media to have been missing from the scene at the capitol building protest, there were numerous credible reports, including one by America’s foremost war correspondent, that Antifa infiltrators were mingling in the crowd.

Nonetheless, the story admits Podhorzer was directly coordinating with these left-wing extremist groups and the word purportedly went out: Stand down.

So the word went out: stand down. Protect the Results announced that it would “not be activating the entire national mobilization network today, but remains ready to activate if necessary.” On Twitter, outraged progressives wondered what was going on. Why wasn’t anyone trying to stop Trump’s coup? Where were all the protests?

Podhorzer credits the activists for their restraint. “They had spent so much time getting ready to hit the streets on Wednesday. But they did it,” he says. “Wednesday through Friday, there was not a single Antifa vs. Proud Boys incident like everyone was expecting. And when that didn’t materialize, I don’t think the Trump campaign had a backup plan.”

There was not a single Antifa vs. Proud Boys incident documented by the media. But where were these radical activists? Were they dressing up in MAGA gear to avoid media detection?

It was one of the most bizarre spectacles of modern times. On January 6th, the Electoral College’s slates of electors were being sent to a Joint Session of Congress, which was to be presided over by then-Vice President Mike Pence in his role as President of the Senate.

It was a day that many voters had been looking forward to: Americans would finally hear the Republicans’ best case that the 2020 election was, at best, deeply flawed, and at worst, unlawful and illegitimate.

The election dispute began with Arizona. The objection had been presaged by passionate and persuasive speeches, such as one delivered by Senator Rand Paul. These election objections would not last for long.

It was not the unprecedented, “seditious” act that radical Democrats allege. Such objections had been voiced by Democrats in 2000, 2004, and 2016.  The party itself had normalized it; just as it is normalizing the extremely divisive practice of politically driven impeachments.

Meanwhile, Washington D.C. had become the central focus for both die-hard Trump supporters and a mix of far-right groups, including the “Stop the Steal” organizers and the Proud Boys. There was a conspicuous absence of the usual left-wing suspects that are typically drawn to large right-wing gatherings, such as Antifa and Black Lives Matters leaders.

President Donald Trump, meanwhile, was guilty only of giving a boilerplate speech making his shopworn case that the election was illegitimate. The president had pleaded this same case countless times before, in much the same terms, and said nothing remarkable deviating from that script. And nothing remarkable had happened after all of those times he had made a virtually identical case.

Trump told the gathered crowd of his actual most fervent supporters who had come from all across the country to listen to him speak explicitly to “peacefully and patriotically make your voices heard.” A timeline reveals that the Capitol riot began twenty minutes before the president’s speech ended. Yet there appears to have been a trap set to frame President Trump for inciting a riot.

Numerous aspects of the entire capitol riot affair appears to have been staged. There were pipebombs placed at the RNC and DNC buildings the night before (and not near the capitol building, as some Democrats have falsely claimed), a classic diversion tactic to draw away police forces from the site of an actual incursion.

There was an obscenely insufficent lack of capitol building security. This was despite advance warnings that the odds of an attack on the capitol building were increasing by the day, including an intelligence report issued by the Capitol Police itself:

Three days before thousands of rioters converged on the U.S. Capitol, an internal Capitol Police intelligence report warned of a violent scenario in which “Congress itself” could be the target of angry supporters of President Trump on Jan. 6, laying out a stark alert that deepens questions about the security failures that day.

In a 12-page report on Jan. 3, the intelligence unit of the congressional police force described how thousands of enraged protesters, egged on by Trump and flanked by white supremacists and extreme militia groups, were likely to stream into Washington armed for battle.

This time, the focus of their ire would be members of Congress, the report said.

The now-resigned Capitol Police chief warned the Congress about an imminent pre-planned attack six times, according to his account, but was denied a stronger presence. It is important to read exactly what the Washington Post reported:

Two days before Congress was set to formalize President-elect Joe Biden’s victory, Capitol Police Chief Steven Sund was growing increasingly worried about the size of the pro-Trump crowds expected to stream into Washington in protest.

To be on the safe side, Sund asked House and Senate security officials for permission to request that the D.C. National Guard be placed on standby in case he needed quick backup.

“We knew we would have large crowds, the potential for some violent altercations,” he added.

The responses from the House’s and the Senate’s respective Sergeant at Arms were reckless at best:

Thus, an emergency could have been declared before the riot broke out. Instead, the message to the Capitol Police and the National Guard: Keep the presence light and the security passive. The House and Senate Sergeant at Arms have since resigned.

The Capitol Police held the doors open for protesters to enter the building. “I disagree with it, but I respect it,” one officer said as protesters shuffled past him.

There were other suspicious aspects of the assembled mob. One high-profile actor was John Earle Sullivan, a radical self-described “revolutionary” who literally founded a group called “Insurgence USA.” After documenting his own account of what transpired, including the suspect shooting death of Trump supporter Ashli Babbitt, he was arrested and charged for his role in helping to incite the riot.

He would later be given an open and welcome platform on CNN to relate what he saw at the capitol building, along with a CNN correspondent who had been right next to him within the building.

One of the protesters that Sullivan filmed appears to have staged the event that led to Babbitt’s shooting. He used a helmet handed to him to smash a window that Babbitt crawled through before being shot. He escaped with police standing by idly nearby, and was recently arrested. The FBI launched a manhunt, and has finally apprehended and charged the suspect, named Zachary Alam. No charges were recommended for the officer who shot and killed Babbitt.

The Capitol riots chaos meant that the president’s claims the election was ‘stolen‘ would never be fully heard by the bulk of the American people. The censorship of the big tech thought police would drive people to hear the case that President Trump had incited a ‘riot’ as presented overwhelmingly through a mainstream media filter.

It turns out that basis for suspending Donald Trump from digital and social media platforms was entirely erroneous. Therefore, their rationale for continuing their bans and suspensions is purely political and has nothing to do with public “safety.”

Furthermore, the entire basis of the Democrats’ impeachment vendetta against Donald Trump is fundamentally eroded to the point of it appearing to be nothing more than a cynical ploy.

The question that now arises: Was it a “trap”?

Editor’s note: This article was lightly restructured after publication to feature the newest information.