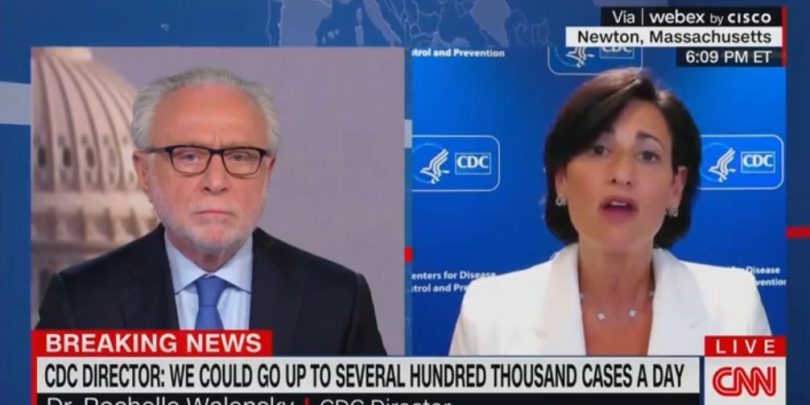 CDC Director Rochelle Walensky has touted the COVID vaccines as a means to keep the public safe from the coronavirus. However, it turns out that the vaccines don’t even prevent transmission of the virus, throwing into question whether taking the vaccines is a matter of public health, rather than a matter of personal choice.

On Friday, Walensky made the admission to CNN’s Wolf Blitzer that the COVID vaccines, which are still under Emergency Use Authorization, don’t perform as well as advertised.

“Our vaccines are working exceptionally well,” Walensky claimed. “They continue to work well for Delta with regard to severe illness and death, they prevent it. But what they can’t do anymore is prevent transmission.”

In March, Walensky had made a claim that vaccinated people almost never carry COVID, which turned out to be patently false.

CDC Director Dr. Rochelle Walensky: “Our data from the CDC today suggest that vaccinated people do not carry the virus.” pic.twitter.com/9W1SHecSEm

“Our data from the CDC today suggest that vaccinated people do not carry the virus,” she said. The CDC Director turned out to be entirely wrong.

In late July, Walensky touted COVID vaccine passports as a ‘path forward’ for the country. Walensky praised European nations requiring “health passes” for citizens to get into public places, such as bars and nightclubs.

“You know, I think some communities are doing that,” Walensky said. “And that may very well be a path forward.”

However, Walensky is lying. One of the least vaccinated major countries in the world, India, has a vaccination rate of 7.9%. The Delta variant surge came and went within the densely populated nation within weeks. The fatality rate has subsequently plummeted again without the aid of the COVID vaccines.

In mid-July, Reuters reported that 68% of Indians have COVID antibodies, which have brought down the case and fatality rates on their own.

“Two-thirds of India’s population have antibodies against the coronavirus, according to data released on Tuesday from a survey of 29,000 people across the nation conducted in June and July,” Reuters reported.

The CDC and the mainstream media will now do to India what they did to Florida Gov. Ron DeSantis: Smear the government data. We saw how that turned out last time.

The COVID vaccines have been held up as the only way to beat the virus. Now it looks like they are the equivalent of seasonal flu booster shots: They don’t stop the flu, but they help those who are at-risk, such as the elderly and immunocompromised, avoid the most serious outcomes.

A Swedish expert has even predicted that vaccine users may need a total of five shots, including boosters, to get the maximum amount of immunity. Compare this poor coverage with natural immunity, which is believed to be superior in terms of providing virus resistance.

“As with many vaccines, we know that there will be refill doses. It is not at all unlikely that we can end up in a position where you have to give recurring doses,” vaccine expert Matti Sällberg said in a Swedish publication.

“Then it’s a third, fourth, maybe fifth dose,” he explained.

In early August, Senator Rand Paul obliterated the CDC’s hysteria about the Delta variant. He appeared on Tucker Carlson Tonight and cited eye-opening statistics that don’t match up with the media’s doom-and-gloom narrative.

“Let me just say this: the first, why would people who have recovered from COVID and have active antibodies and are therefore immune — they have natural immunity — why would they be forced to take an experimental vaccine to give them artificial immunity?” Carlson asked.

“Yeah, there’s no science behind it. All of the studies that have looked at natural immunity show that natural immunity has at least as good of an immunity as you get from a vaccine,” he said. “People have to realize that vaccines are based on what we learn from natural immunity over the last couple of hundred years, how the body responds to a foreign particle ─ a virus or a bacteria ─ and then we simulate that with the vaccine.”

“So the vaccine is simulating the natural immunity that I have, but Dr. Fauci discounts it,” he continued. “Thirty-five million people officially have had COVID, but really, conservative estimates, even the CDC, indicate another 70-some-odd million have had it. So really, it’s over a hundred million Americans have had it. Probably 150, 160 million have been inoculated with the vaccine. Together, we have an enormous amount of success with immunity. In fact, the other day I saw that over 65 years of age, 90% of people have now been inoculated. So this is extraordinary success, and yet they say, ‘Oh no, we have to inoculate your newborn in the hospital before you can take them home. It makes no sense and the science doesn’t support it’.”

“That works out to 0.08 percent, less than the flu. That’s under age 50,” he continued. “Over age 50, there was about half as many people died as were dying last year. So the Delta variant is more transmissible but less deadly.”

Such pesky facts aren’t stopping the Biden administration from ratcheting up its strongarming of private businesses to force employees to get vaccinated or else, even as White House press secretary Jen Psaki earlier said it was “not the federal government’s role.”

The COVID vaccinations are an end in themselves for the Biden administration, regardless of the COVID risk to individual Americans. Now that the CDC Director admitted that the vaccines don’t prevent the spread of COVID, then it is no longer a public health issue, but one of personal risk mitigation that should be 100% between a patient and a doctor.