China is Already Racking Up the ‘Wins’ Under the Biden Administration 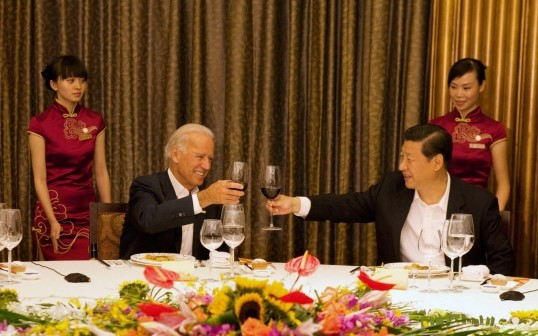 China must be absolutely thrilled that Joe Biden has been elected the U.S. president and its nemesis Donald Trump is out of the picture.

“We hope the two sides will uphold the spirit of non-conflict and non-confrontation, mutual respect and win-win cooperation, will focus on cooperation, control differences and promote healthy and stable development of Chinese-U.S. relations,” Xi’s statement read.

Xi Jinping has expressed his desire for “win-win” relations with America. China may indeed wind up getting all of that with the Biden administration — and more.

The CCP made it clear that it considers the departing members of the Trump administration to be enemies of the state. China recently sanctioned “lying and cheating” former Secretary of State Mike Pompeo and 27 other top Trump officials.

“The 28 ex-officials and immediate family members would be banned from entering mainland China, Hong Kong or Macao, and companies and institutions associated with them restricted from doing business with China,” Newsmax reported. 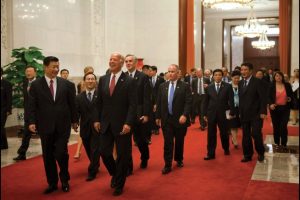 The Biden administration has already utilized an unprecedented number of executive orders and actions, some of them clearly benefiting China. As Daniel Turner succinctly put it in Real Clear Energy:

This morning, the omnipresent face of the U.S. coronavirus response, Dr. Fauci, issued the announcement that the country was rejoining the World Health Organization.

“I am honored to announce that the United States will remain a member of the World Health Organization.”

Dr. Anthony Fauci on Thursday told the WHO executive board that the U.S. will remain a member of the organization. https://t.co/QMZqtfC3ru pic.twitter.com/fCCTFT2LGZ

This is the same WHO that covered for China’s disastrous and suspect handling of the COVID-19 global outbreak. The Heritage Foundation notes:

COVID-19 was first detected in Wuhan in late November or early December. Chinese authorities reacted by suppressing details of the disease and punishing doctors who tried to alert the public and the world. China did not inform the WHO about the virus until Dec. 31, weeks after it had detected the disease. Even after informing the WHO, Beijing continued to suppress information about human-to-human transmission of the disease. […] Despite this evidence, however, the WHO strongly opposed travel restrictions…

A supposedly “independent panel” that was actually commissioned by the WHO recently slammed China and even criticized the WHO for their catastrophic handling of the COVID-19 outbreak. Its solution? More funding for the WHO.

Aside from the WHO’s delayed warning about China and its strong opposition to the Trump administration’s travel bans, it has burned through all scientific credibility. Its public opposition to masks to slow the spread of COVID-19, much like Fauci’s own turnabout, has made it far from a reliable voice for “science-based,” non-politicized decision-making.

“In the early days of the pandemic, the World Health Organization, the Centers for Disease Control and Prevention, and even WIRED warned people against using masks,” a Wired report confessed. “They wouldn’t protect people against getting the disease, all those organizations said, and supplies looked short for the personal protective equipment that health care workers were going to need when the pandemic got bad.”

How far we have come from the days when masks were considered ‘ineffective’ to now ‘indispensible.’ Biden is now asking Americans to wear a mask for the next 100 days.

Pres. Biden: "I'm asking every American to mask up for the next 100 days."

"The experts say by wearing a mask, from now until April, we’d save more than 50,000 lives." https://t.co/kfbFENloYT pic.twitter.com/7UcSaLp4UU

This signals that the Biden administration is going to continue to support keeping the U.S. economy fettered by the coronavirus lockdowns. All this while China has experienced GDP growth.

The convergence of such news will only fuel accusations about “China Joe” or “Beijing Biden.” Biden has a track record of downplaying the threat from China.

“I mean, you know, they’re not bad folks, folks. But guess what? They’re not competition for us,” he added.

Despite accusations that investigations into his son Hunter Biden’s business deals were ‘Russian disinformation,’ such reports have been proven to be well-founded. The New York Post’s original expose was even censored by Big Tech giants ahead of the 2020 election, despite the reliability of the report.

And an NBC report published after the 2020 election showed that Hunter Biden has been under official investigation for years:

Federal authorities investigating Hunter Biden’s taxes are examining his business dealings in China, according to a source familiar with the inquiry.

The investigation, which Hunter Biden announced Wednesday, was opened in 2018, the year before his father announced his candidacy for president, the source said. The inquiry was already in motion when William Barr was appointed attorney general.

Yet another report exposed Hunter Biden made over $6 million from business with Chinese companies and was even ‘gifted’ a 2.8 carat diamond. The son of now-president Joe Biden even received a $5 million payment from a Chinese Communist Party connected energy firm.

There is also significant evidence, including video evidence, that strongly suggests Hunter Biden habitually used cocaine and prostitutes. Such ‘kompromat’ or ‘compromising material’ that could be used to blackmail a powerful politician was often alleged against former President Trump, due to the discredited Steele dossier, with zero evidence to back it up (it was even chalked up as ‘salacious‘ bar room talk by one source).

It looks like in the case of Joe and Hunter Biden, however, such kompromat may be much-too-real.

On the positive side, counter-intelligence officials are warning President Biden about the “severe” threat posed by China. Avril Haines, Biden’s choice for Director of National Intelligence, has stated her position that an “aggressive” stance against China is needed. The issue is: Will Biden listen?