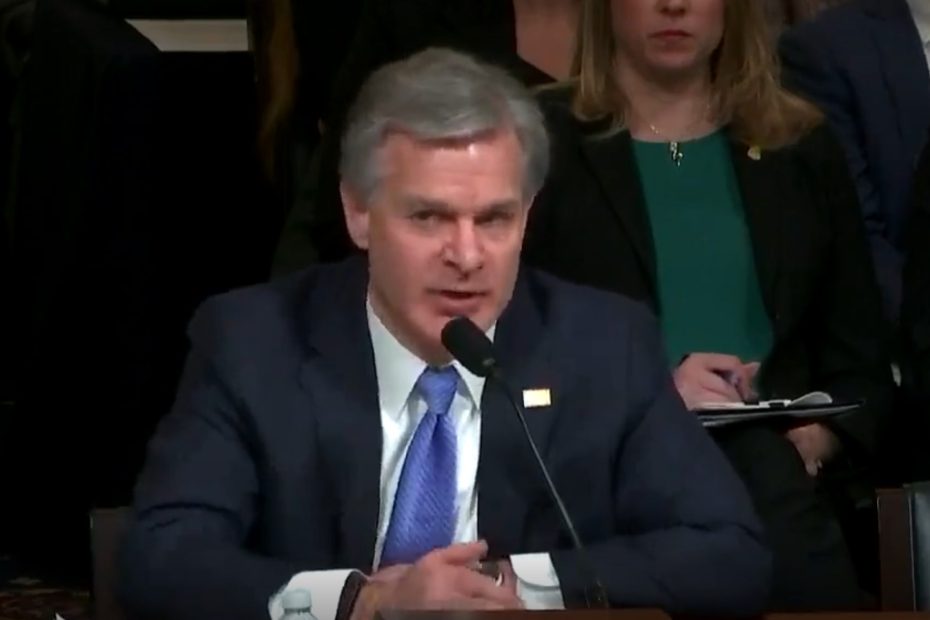 Chris Wray, the Director of the Federal Bureau of Investigation, appeared before the House of Representatives on Tuesday, and once again was grilled about the FBI’s knowledge of and participation in the events of January 6.

Rep. Clay Higgins (R-LA) pressed Wray about FBI informants amid the far-right extremists that had planned the Capitol siege in advance of the Electoral College proceedings that day.

Watch as Higgins unloads on Wray for once again refusing to give a straight response to a question that the American people have every right to have answered.

“Well, congressman, as I’m sure you can appreciate, I have to be very careful about what I can say about when…” Wray began.

“Even knowledge, ’cause that’s what you told us two years ago,” Higgins interjected.

“Did you have confidential human sources dressed as Trump supporters inside the capital on January the 6th prior to the doors being opened?” Higgins asked.

“Again, I have to be very careful…” Wray said.

“It should be a ‘no’,” Higgins proclaimed. “Can you not tell the American people ‘no’? ‘We did not have confidential human sources dressed as Trump supporters positioned inside the capitol’?”

“You should not read anything into my decision not to share information,” Wray said as Higgins’ time expired.

The testy exchange follows upon the New York Times begrudgingly admitting that there were more FBI informants involved in the January 6 events than earlier acknowledged.

“The F.B.I. had as many as eight informants inside the far-right Proud Boys in the months surrounding the storming of the Capitol on Jan. 6, 2021, recent court papers indicate, raising questions about how much federal investigators were able to learn from them about the violent mob attack both before and after it took place,” The Times reported on Monday.

“The existence of the informants came to light over the past few days in a flurry of veiled court filings by defense lawyers for five members of the Proud Boys who are set to go on trial next month on seditious conspiracy charges connected to the Capitol attack,” the report continued. “In the papers, some of which were heavily redacted, the lawyers claimed that some of the information the confidential sources had provided to the government was favorable to their efforts to defend their clients against sedition charges and was improperly withheld by prosecutors until several days ago.”

“In a sealed filing quoted by the defense, prosecutors argued that hundreds of pages of documents related to the F.B.I. informants were neither ‘suppressed’ by the government nor directly relevant to the case of the Proud Boys facing sedition charges: Enrique Tarrio, the group’s former leader; Joseph Biggs; Ethan Nordean; Zachary Rehl; and Dominic Pezzola,” the Times added.

Left-wing pundit Krystal Ball asked the $64,000 question about the revelations.

What a mess. Fed had informants with the Proud Boys and the Oath Keepers. So why the hell didn’t they prevent Jan 6? https://t.co/Unq9VceqhU

“What a mess. Fed had informants with the Proud Boys and the Oath Keepers. So why the hell didn’t they prevent Jan 6?” Ball asked.

Julie Kelly of American Greatness points out that the J6 committee had completely sidestepped the delicate matter of the FBI’s role in January 6.

Thompson's J6 committee has totally ignored FBI. It's not even certain investigators interviewed Wray or any top FBI official.

Wonder if anyone will ask about bombshell confirmations re informantshttps://t.co/VQBt9r8HCW

“Thompson’s J6 committee has totally ignored FBI,” Kelly said. “It’s not even certain investigators interviewed Wray or any top FBI official. Wonder if anyone will ask about bombshell confirmations re informants.”