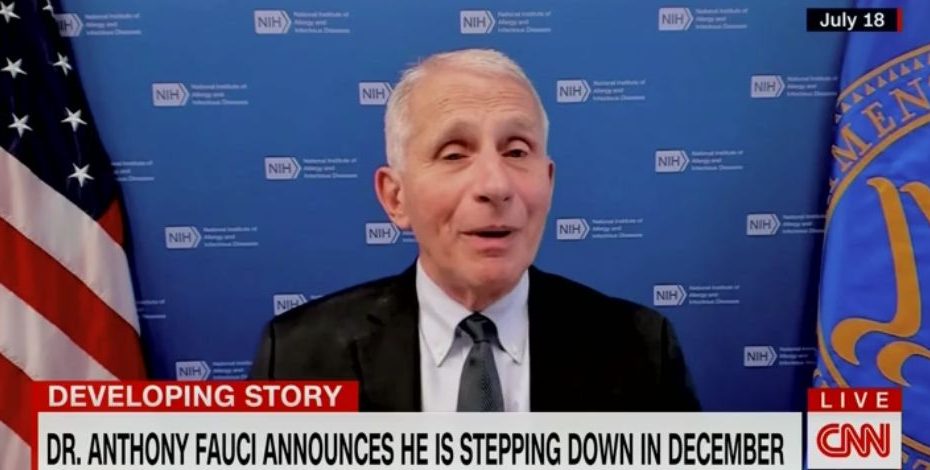 A CNN analyst effectively admitted the inauspicious timing surrounding Dr. Anthony Fauci’s sudden announcement of his planned retirement at the end of the year. Watch:

Dr. Jonathan Reiner, a CNN Medical Analyst and a Professor of Medicine at George Washington University School of Medicine and Health Sciences, explained there may be political consequences coming for Dr. Fauci during the next Congress.

“Just last month Dr. Fauci was on and I had asked him, there had been some talk, about his retirement plans, and I asked him about if and when he would retire, I want to play for you part of what he told me,” Kate Bolduan said.

“I can’t be in this job forever,” Fauci says in the rolled clip. “And I don’t anticipate I’ll be in this job… at the end of the first term of President Biden, which is January 2025.”

“At that point, he said that to me because he was trying to get everyone to tamp down talk of his retirement,” Bolduan claimed. “And, but he did make clear, that no matter when it would be, which now we know would be in December, that it was not the end of his career. And… one of the things that I know that he says that he wants to do is to inspire the next generation of scientific leaders. What do you think that looks like?”

“Well, maybe this will get him more time to be a mentor,” Dr. Reiner said. “I hope it gives him more time to write and to be an inspiration to to young physicians and kids in high school. I would say that I would hope that this president would give Dr. Fauci the Presidential Medal of Freedom, but he’s already received the Presidential Medal of Freedom.”

“I think he’s probably frustrated with how much politics has polluted the work that he has to do,” Dr. Reiner added, incredibly. “He’s not just a scientist and chief medical advisor to the president, but the world in which he lives has been incredibly politicized. You know, just last week, there were members of Congress telling him to clear his calendar when the House changes majorities so that he could testify… pretty much, you know, full time, the concept of doing that has to be very, very unappealing for him.”

This is a direct implication that Dr. Anthony Fauci does not want to be dragged before an adversarial Congress that intends to hold him fully accountable for his actions and advice as the nation’s top Covid doc throughout the pandemic. He plans to leave town before his actions get held under severe scrutiny.

“You mentioned the AIDS crisis,” Bolduan noted. “I mean, he was on far before COVID at anything. I mean, he really was on the front lines of the AIDS crisis. What do people need to remember about that?” she asked.

“Well, he, he received a lot of criticism and you know, some of it, I think, you know, are well placed,” Dr. Reiner said. “But I think when, when you talk to people who have been central to the AIDS and HIV crisis for the last 40 years, I think he’s come to gain their, their respect. I think he has listened to his, his critics and ultimately, HIV-AIDS has been transformed into a disease that when I was a resident killed every single person that it that it infected to now a chronic disease that is — that people live very long and very healthy lives with. And that hasn’t happened without people like Tony Fauci. It hasn’t happened without  his leadership. So you know, you can ask people central to the HIV-AIDS epidemic, how much Tony Fauci has really garnered their respect. And I think you’ll see that their uniform in their praise for him now.”

This is some duplicitious revisionist history that has sadly become pretty commonplace at CNN. It is one reason why its show hosts are getting axed left and right, Brian Stelter of un-Reliable Sources being the latest example, and with the specter of more firings to come.