Doctor Stuns CNN by Delivering ‘Bad’ News: Omicron is ‘Mostly Mild,’ There are ‘No Red Flags’ 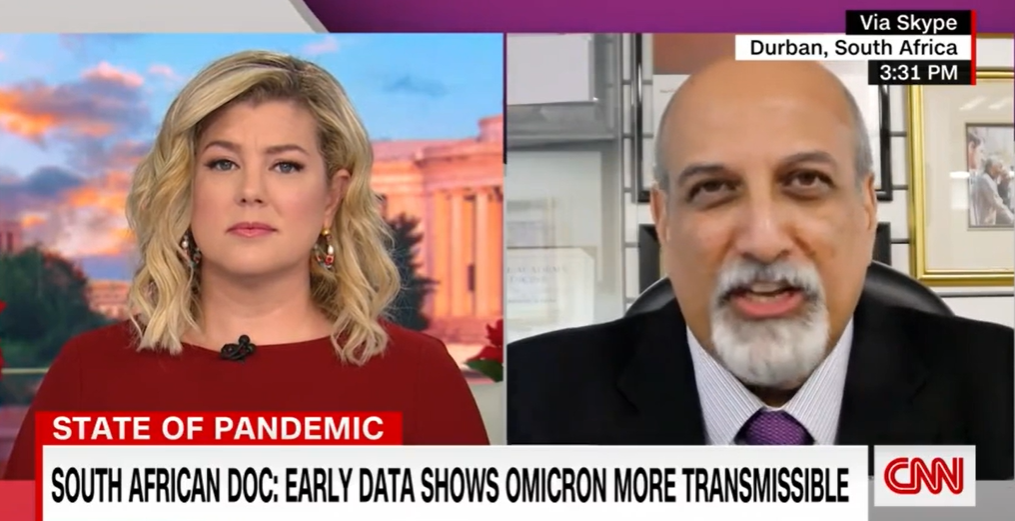 CNN invited on Dr. Salim Abdool Karim, a South African doctor, to discuss the latest medical information on the Omicron variant, which is being used to justify increasingly extreme government mandates and lockdowns in numerous once-free nations.

Omicron’s impact on patients thus far has been “mostly mild,” but there may be “severe” cases later, the doctor said.

CNN host Brianna Keilar began by asking the doctor about Omicron’s transmissibility. In a sign that the “experts” have already given up on the “vaccines” stopping variants like Delta and Omicron, she gives a tacit admission that they are not “effective” against these mutations.

“Is this more transmissible and are you seeing it evade vaccines?” Keilar asked.

“Yes,” Dr. Karim replied. “When we look at the virus itself, it has several mutations that should confer on it the ability to transmit faster, but of course we need to know whether it’s doing so. So now, when we look at the epidemiological data, we’ve compared the three previous waves and the rate at which they increase in the first seven days after the wave threshold. And what we have found is that the Omicron variant is doubling faster than any of the three previous waves.”

The developing problems with this for the lockdown and vaccine passport extremists are manifold: First, higher transmissibility, provided “mild” symptoms, means that there is likely to be a rapid increase of prior infections with Covid. This has the potential to exponentially increase Natural Immunity, which is being demonstrated in states that have experienced the third wave from the Delta variant (southern states like Florida, e.g.).

Secondly, the vaccines are again admittedly not stopping the spread (CNN refers to this as ‘evasion,’ but it may be more appropriate to call them ‘vectors’ for the variants).  This means that vaccine “mandates” and “passports” are moot. And if the symptoms continue to be less severe, then the argument about reducing hospitalizations (people may remember “15 Days to Slow the Spread”), then the public health rationalizations for extreme Covid response policies evaporate.

“And we are hearing, as we of course have concerns about transmissibility, we want to know about how severe it is, and there are some South African scientists who say breathing doesn’t seem to really be an issue for patients infected. Is that what you’re seeing? Can you explain this?” Keilar asked breathlessly.

“So, we have two sources of data,” he replied. “The first is anecdotal data from our doctors at the front line. I’ve been speaking to the chair of our medical association, she collects this data from all the doctors, and essentially what they are saying to us at this stage is that the cases are generally mild, seems to be slightly more people in the younger age groups, but the presentation is essentially similar to the way patients presented in the previous waves.”

“Now, one has to be very careful in over-interpreting that, because it’s still very early days, in that severe cases usually take longer, they occur in weeks 2, 3 and 4, so it may be that severe cases will follow later, but certainly at this stage, with the data we’re seeing in terms of these reports, there are no red flags,” he added.

Dr. Karim then addressed the reports about children being impacted that alarmed many parents. It should be noted that the mainstream media earlier hyped such reports about the Delta variant, which were later proven false.

“The second is data we get from our admissions database,” he said. “Now there’s a bit of a lag, so it’s running a few days behind, and what we saw early on is we saw an increase in the number of hospitalizations in children below the age of 5. That initial increase in children who are younger is now being offset in that it might have been just an early aberration. It’s now easing off and probably the proportions that are being admitted have been now correcting themselves.”

“It’s also quite possible, because schools were open and preschools were open, that we may have seen those cases emerging. But even the children who are admitted were mostly mild conditions. So not — we haven’t been seeing many severe cases. But again, I want to just caution, we’ve only known about this for a week so it’s still early days,” he said.

“So mostly mild cases. Have there been any severe cases in kids? What can you tell us about that?” she asked.

“Yes, we have seen several severe cases in children. We would be expecting to see that. The ICUs have reported admissions of children as well, and adults, so we are seeing severe cases, but it’s very different from the previous waves in that in the previous waves there was this deluge and we became overwhelmed with just a lot of patients arriving early on. Even though this virus is transmitting faster, we aren’t seeing that same early pressure. Part of it is probably due to vaccines and some of it may be due to the actual clinical features of the virus itself. So I think it’s a mixed bag.”

One of the interesting final points is that even as the Omicron variant’s symptoms have been admittedly “generally mild,” the doctor claims that “natural infection” does not appear to be preventing “reinfection.”

“What might be a concern is relating to whether vaccine also hold against it, and there what we have seen in the latest information that’s become available from our national institute of communicable diseases is that we are seeing an increase in reinfection, so there is an early analysis from one of our centers… that looked at the ratio of reinfections to new infections and what we’re seeing with omicron is an increase in reinfections.,” he said.

“The ratio is 2.4, higher than what we saw in our previous waves,” he added. “Now, we expect some increase because we’ve had more past infections now, but this increase is way out of range, so that means it looks like past natural infection does not seem to be protecting to any significant extent from Omicron infection. On the vaccine front, we really don’t have data yet. That’s still to come. We are seeing breakthrough infections in vaccinated individuals, but so far, they’ve been mild. But I don’t want to make too much of that, still too few cases to make any comment.”

So, there is no data to support that natural immunity isn’t mitigating symptom severity from Omicron, but it is considered appropriate to speculate that it doesn’t prevent reinfection (whatever that means – natural immunity, like vaccinated immunity, means the body’s ability to fight off infections)? It is a known fact that the first Omicron patients discovered were “fully vaccinated” and that a high number of Omicron patients were among the vaccinated.

There is no basis for hysteria. But since this is CNN, a state propaganda network, after all, the alarmists are holding out hope.