CNN’s duplicity doesn’t even stop when it comes to unfair treatment of Republicans and softball treatment of Democrats. It even treats Americans differently by playing it more straight and objective with U.S. news coverage with the rest of the world.

Biden’s first foreign trip ended on Wednesday after a week of embarrassments among the world’s most powerful leaders. The culmination of the trip was a meeting with Russian president Vladimir Putin, whom Biden earlier branded a ‘killer.’

Biden was pressed by CNN reporter Kaitlan Collins on the issue of how he could be confident that Putin could abide by any of his demands at the meeting. The president snapped at the reporter, swearing ‘what the hell?’ and implying she may be ‘in the wrong business.’

The U.S. president later apologized to the CNN reporter for his unpresidential behavior, but that didn’t stop CNN from immediately gushing about the foreign trip in truly Orwellian fashion. A glimpse at CNN’s U.S. politics page shows what the editors want the American people to take away from Biden’s trip. 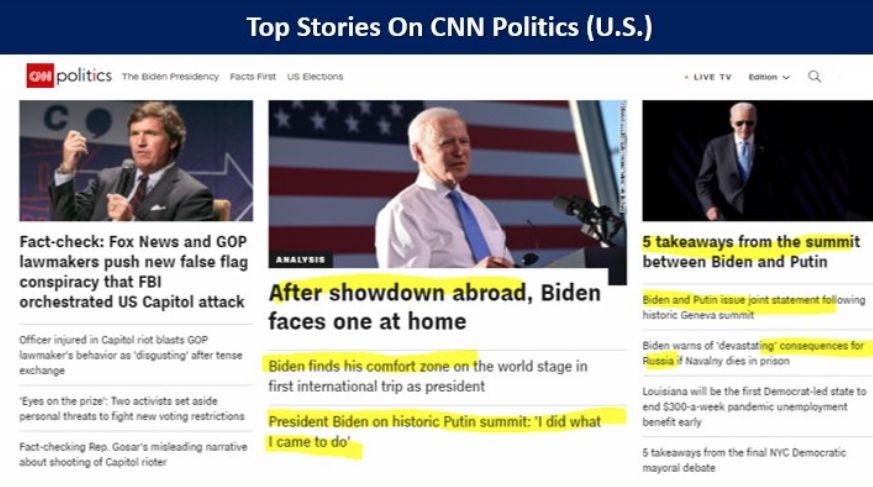 A sample of headlines, as pointed out by the website Panda Tribune:

Meanwhile, this is what European readers of the World section see:

The headline: “Putin got exactly what he wanted from Biden in Geneva.” A number of key passages provide a remarkable contrast to the pro-Biden narrative that is boilerplate on the “news” network.

“The optics of the summit were almost tailored to suit Putin’s domestic needs,” CNN World reported. “The meetings were requested by the US, which as far as the Kremlin is concerned, confirms that Putin is a leader of similar stature to the US President.”

“This is exactly what the Kremlin wants. To talk to the US as equals and in such a way that the other side does not demand a change of position as a condition of dialogue,” says Oleg Ignatov, Crisis Group’s senior Russia analyst based in Moscow.

“There is no doubt that Putin will continue to test Biden if the dialogue deadlocks or develops in a direction that is disadvantageous to Moscow. This is not yet the beginning of the normalization of relations. It is a pause in their further deterioration,” he added.

Another remark further underscores that Putin ‘got what he wanted’ from the summit.

“His robust response both to softball questions from tame Russian media and to challenges from foreign journalists will win points at home from those Russians who share his conviction that it is the West who is the dangerous, unpredictable, aggressive partner in the relationship,” said Keir Giles, Senior Consulting Fellow, Russia and Eurasia Programme at Chatham House.

The bottom line analysis is devastating to the narrative that Biden was “tough” on Putin, put forth by CNN’s U.S. pundits like Jim Sciutto, who argued that Putin essentially ‘looked away’ during a joint photo, the equivalent of ‘blinking.’

“The summit has also given Putin an opportunity to pause the fallout from deteriorating relations between Moscow and DC, as the US might now be reluctant to place additional economic sanctions on Russia or reprimand Putin for arresting dissenters at home. All of which could be useful when Russia holds parliamentary elections later this year,” the report said. “In short, Putin went to Geneva and got exactly what he wanted. And he left Switzerland with a huge diplomatic victory, simply by turning up.”

Joe Biden carried himself with a seasoned air of confidence that new presidents seldom possess. The Biden doctrine will be tested in the months ahead as the relationship he's crafting with Putin and other leaders develops. @Kevinliptakcnn & I report: https://t.co/jmh0mkR4tM

“Joe Biden carried himself with a seasoned air of confidence that new presidents seldom possess,” Zeleny wrote on Twitter. “The Biden doctrine will be tested in the months ahead as the relationship he’s crafting with Putin and other leaders develops.”

However, there were so many ridiculous moments during Biden’s trip that it is difficult to name them all in a short space.

There are a number of examples of Biden’s unpresidential behavior during the foreign trip cited on this website (they can be read below). Suffice to say, Trump would have gotten eaten alive by the U.S. media if he displayed half of the poor judgment shown by Biden during his European trip, and first and foremost among his critics would have been CNN.