CNN Legal Analyst Paul Callan ripped the FBI raid of Donald Trump’s Mar-A-Lago estate as unnecessary and a “daring and dangerous” action against a former President of the United States. Watch:

“I think one thing we all, everyone agrees on is there are a lot of questions here,” CNN host Brianna Keilar said. “Paul, a lot of questions here. A lot more answers to come. We’ve heard a lot about the Presidential Records Act now and have for quite some time. If this becomes a Presidential Records Act violation, not more, do you think it is enough to warrant all of this?”

“No, it’s not enough to warrant all this,” Callan replied. “And this is a daring and dangerous move by the Department of Justice to serve a warrant on a former president and to raid his personal residence.”

The FBI raid is so egregious that even former Democratic presidential candidate Andrew Yang expressed serious concern about its profound implications.

It seems like this was authorized by a local judge and a particular FBI office without buy-in or notification of higher levels of government. But literally no one will believe that or make a distinction. It’s probably bureaucratic but it seems political.

“I’m no Trump fan. I want him as far away from the White House as possible,” Yang said. “But a fundamental part of his appeal has been that it’s him against a corrupt government establishment. This raid strengthens that case for millions of Americans who will see this as unjust persecution.”

“It seems like this was authorized by a local judge and a particular FBI office without buy-in or notification of higher levels of government,” Yang claimed. “But literally no one will believe that or make a distinction. It’s probably bureaucratic but it seems political.”

“If they raided his home just to find classified documents he took from The White House,” one legal expert noted, “he will be re-elected president in 2024, hands down. It will prove to be the greatest law enforcement mistake in history,” Yang added, citing a Politico article.

However, the FBI raid was authorized by an Obama donor with deep connections to disgraced, now-deceased pedophile Jeffrey Epstein. Bruce Reinhart, authorized a sealed search warrant that can be viewed on Court Listener records. 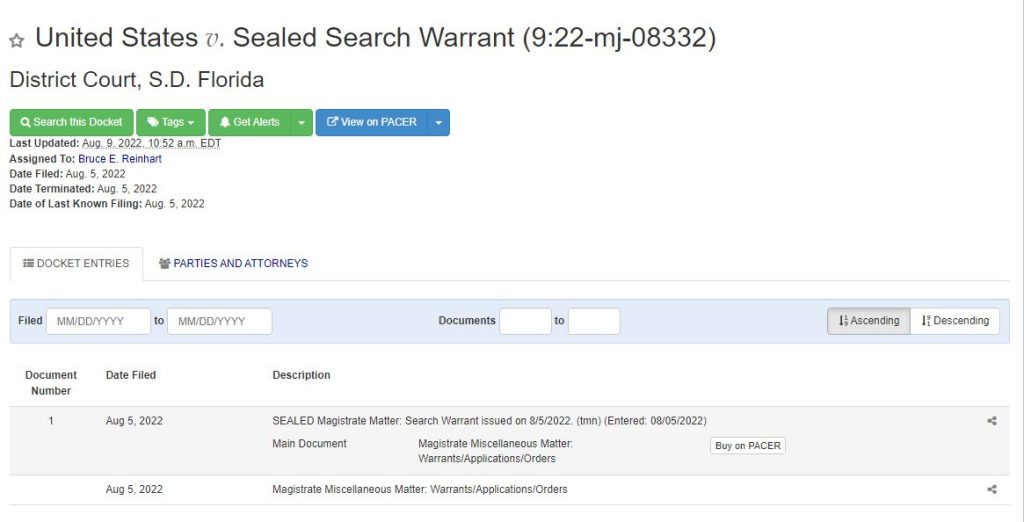 Judge Reinhart’s record of political donations indicate that he donated $1000.00 to the campaign of presidential candidate Barack Obama in 2008.

Bruce Reinhart was also closely associated with well-connected, now-deceased pedophile Jeffrey Epstein, according to a report from Laws in Texas.

“Bruce Reinhart once quit his job as a U.S. Attorney to work for Jeffrey Epstein, the multimillionaire accused sex trafficker who was being targeted in a probe by the U.S. Attorney’s office,” the report states.

Reinhart’s authorization of the FBI’s warrant, submitted under the authority of Trump-appointed FBI Director Christopher Wray, led to a raid conducted by an estimated 30 FBI agents at former President Donald Trump’s home at Mar-A-Lago in Palm Beach, Florida on August 8.

The search warrant, purportedly based on ‘probable cause’ to believe a crime had been committed, was executed in connection with the National Archives’ delayed receipt of 15 boxes of classified documents.  The FBI allegedly believed that Donald Trump was still in possession of ‘classified’ documents. The New York Times reported:

As pointed out by high-powered Democrat attorney Marc Elias, who is deeply involved in 2020 election lawsuits, there appears to be a political motive behind the raid to disqualify Donald Trump from running for presidential office in 2024. 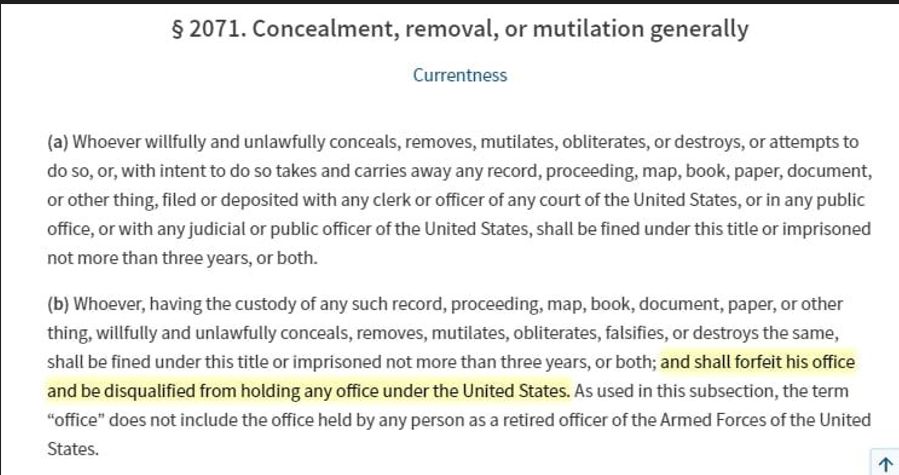 However, legal scholars believe the courts would likely conclude that Section 2071 does not prevent Trump from being elected president in 2024. In a similar case in 2015 involving then-presidential candidate Hillary Clinton illegal possession and destruction of classified records, the general consensus was that the law’s disqualification clause does not apply. As Reason magazine concludes:

If Trump is convicted of violating this statute, can he be disqualified from the presidency? No. And my colleague Seth Barrett Tillman wrote about this precise issue in 2015. At the time, conservative commentators, including former Attorney General Michael Mukasey, argued that Hillary Clinton could be disqualified from the presidency due to the storage of classified materials on her private email server. Seth explained that Mukasey’s argument does not work.

In any event, there is reason to believe that FBI’s witch hunt will turn up empty-handed. According to the former president’s son Eric Trump, the FBI agents cracked open a safe, only to find that was ’empty.’

“JUST spoke to Eric Trump,” Fox News’ Brian Kilmeade tweeted. “[N]othing in the safe, FBI agents 30 approx raided on behalf of nation archives… This is outrageous – has to have come from POTUS and/or someone in White House.”

“More from Eric Trump,” he continued. [W]hen Pres[ident] Trump lawyers scrambled to raid she was told to stand in corner and demanded they shut security cameras… they didn’t…my view: sounds like how they handled Manafort, Navarro, & Roger Stone…FBI out of control..White House lost their minds.”

Legal scholar Jonathan Turley points out that “it is not a given that criminal prosecution would result even if documents are found at the location. Such acts can result in prosecution but PRA violations are rarely subject to prosecution.”

As president, Donald Trump had the authority to declassify any documents in the federal government. CNN reported the Biden White House’s denial that it was given a ‘heads up’ on the raid. However, there is more than ample cause that not only did the Biden White House know about the raid, it was politically motivated to prevent Donald Trump from running for president again in 2024.

The Democrat-weaponized Department of Justice is fomenting a Constitutional crisis. The Biden DOJ has investigated concerned parents as potential ‘domestic terrorists,’ played a role in an entrapment scheme in the Whitmer kidnapping plot, made highly visible arrests of fringe right-wing groups like the “Patriot Front,” and was conspicuously derelict in duty during the January 6 riots, while aggressively overcharging and persecuting Capitol Building trespassers as political prisoners.

The Department of Justice has become the Department of Injustice on President Joe Biden’s watch. The FBI now poses an existential threat to American citizens who do not fall in line with the Marxist Democrats’ radical schemes. Donald Trump’s home is but the trial run in the Democrats’ deliberate escalation of political tensions in the once-free United States of America.