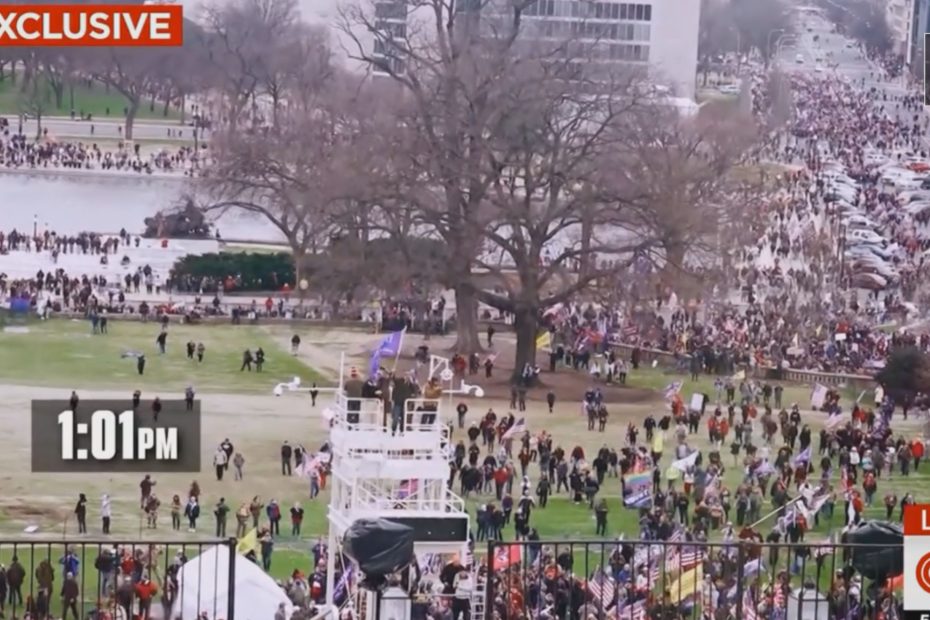 CNN on Thursday revealed exclusive footage from January 6 that came directly from Nancy Pelosi’s daughter herself. It was hand-selected by the partisan January 6 committee to show the American public on primetime cable television.

There are still 14,000 hours of footage from January 6 that the Department of Justice won’t allow the American people to see, presumably because it would damage its ability to prosecute J6 political prisoners in court.

Approximately thirty seconds into CNN’s presentation of the Democrat-selected footage, there is a suspect appearance of “mystery man.” Watch:

Standing a top a tower with a commanding view of the rioters and far-right extremists below, there is [an unidentified man] with a Trump flag in one hand and a cellphone in the other. 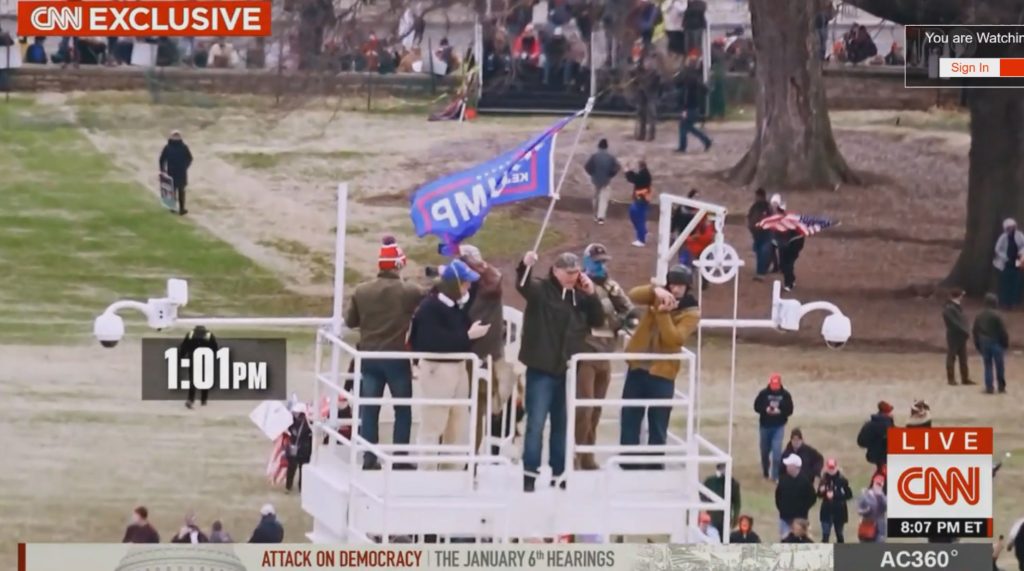 “How did that guy get up there?” a young woman asked.

The footage was shot by Nancy Pelosi’s daughter, Alexandra Pelosi.

The man in the video strikes a resemblance to Ray Epps, but it may not be him, according to Darren Beatie.

Important to fact check these things so as not to give the Regime any ammunition https://t.co/tNRMPsP5Bc

The seemingly ubiquitous “mystery man” Ray Epps was not charged for his role in January 6, despite being captured on video the night before attempting to incite protesters to storm the Capitol building.

A Politico report provides an excuse for why the FBI put Epps on the “most wanted list” and then surreptitiously took him off without an arrest — despite similar January 6 cases being prosecuted.

“Epps, who has become the centerpiece of an unsupported GOP claim that the FBI incited the mob that ransacked the Capitol last year, met with the Jan. 6 select committee in November and told them he had no relationship to the FBI or any other federal law enforcement agency,” Kyle Cheney reported. “But the meeting was just a precursor to a more-formal transcribed interview this week, said Epps’ lawyer John Blischak.”

Epps was caught on video coordinating with a protester who was involved in the first attack on Capitol police barricades.

“Epps has kept a low profile since former President Donald Trump’s allies began promoting a theory that Epps was a federal agent and helped foment the attack,” the Politico report went on. “Their claims stem from videos taken on Jan. 5 showing Epps urging Trump allies to ‘go into the Capitol’ — an exhortation that some in the crowd quickly booed and responded to with chants accusing Epps of being a ‘fed.’ Epps quickly added that it should be done ‘peacefully’.”

Ray Epps was among the very first people to instigate the January 6 riot. Here he appears to be giving instructions to a clean-cut, athletic young man, whom we later find out is Ryan Samsel.

“But Epps did not appear to join in the violence and his lawyer says ‘he was never in the Capitol building’ — key factors in the Justice Department’s charging decisions,” the report adds.

Epps was on an FBI “most wanted list” until he was then quietly scrubbed. On January 8, the FBI field office tweeted out a photo that included a man who appears to be Epps. It seems he can be seen in Photograph #16 at the bottom left of the tweet series.

As Revolver News points out, those suspects who were arrested get an “Arrested” label put underneath their photos. However, Epps’ photo was outright deleted from the page.

The report also points out that not only did Epps instruct his “commandos and the crowds at his attention to rush into the Capitol,” but he also “assiduously protected cops and law enforcement so no local or federal officers would be harmed during the precision breaches.”

You can see this inconsistent behavior in the video below.

Ray Epps, an Arizona man seen in widely-circulated videos telling Trump supporters on multiple occasions to go into the Capitol, also seemed to have acted on his own.

A number of Republican Congressmen have attempted to get answers about Ray Epps’ actual role in January 6.

Rep. Thomas Massie, among other Republican congressional members, has questioned Attorney General Merrick Garland about whether there was any FBI provocation involved in the Jan. 6 riots.

The Department of Justice refused to provide a comment.

On January 11, Senator Ted Cruz ignited five-alarm fire bells in the establishment press with his questioning of FBI officials over the identity of Ray Epps.

Jill Sanborn: "I am aware of the individual, sir." pic.twitter.com/0rrY7ukDyx

Senator Cruz didn’t let up. Jill Sanborn, executive assistant director of the National Security Branch, would not confirm or deny it. “Sir, I cannot answer that question,” she said.

If the midterm elections go the right way, perhaps the American people will finally get answers on who Ray Epps is and what he was actually doing on January 6.