Cornell University, an Ivy League institution located in Ithaca, New York, fancied itself as one of the leading universities in the country when it came to implementing Covid measures based on “the science.”

But one of Cornell’s own professors has put a massive dent in those pretensions. In a new research letter published at the JAMA network, Dr. Genevive R. Meredith, a doctor of public health at Cornell University, demolished the argument that all of the Covid and vaccine mandates mattered.

“As SARS-CoV-2 was detected in the US, emergency public health measures took effect, including shutting down schools,” Dr. Meredith writes. “As prevention and control measures improved, emergency response policies were rolled back. Cornell University opened for residential instruction in Fall 2021 using an extensive testing, contact tracing, and isolation program in partnership with the Tompkins County Health Department. Vaccination was mandated for all students and encouraged for employees. Masks were required on-campus, and isolation orders and contact tracing occurred within hours of any positive result. We hypothesized that these measures would limit COVID-19 spread on campus and sought to monitor this with a case-series study of university testing records.”

Wrong. They did nothing to ‘slow the spread’ the doctor of public health found.

“Based on analysis of routinely collected population surveillance data, Cornell’s experience shows that traditional public health interventions were not a match for Omicron,” she concluded. “While vaccination protected against severe illness, it was not sufficient to prevent rapid spread, even when combined with other public health measures including widespread surveillance testing. Generalizability of the study finding might be limited due to the demographics of its sample (the majority of participants were undergraduate students) and by the study’s single institutional setting. As SARS-CoV-2 continues to adapt, surveillance and case-series studies that look across different populations and settings will be helpful in identifying sentinel events and guiding actions to mitigate harm.”

Yet, even the casual justification that they ‘protected against severe illness’ is highly disputable. Firstly, young people 18-29 without serious underlying health conditions are at near-zero mortality risk from Covid-19. 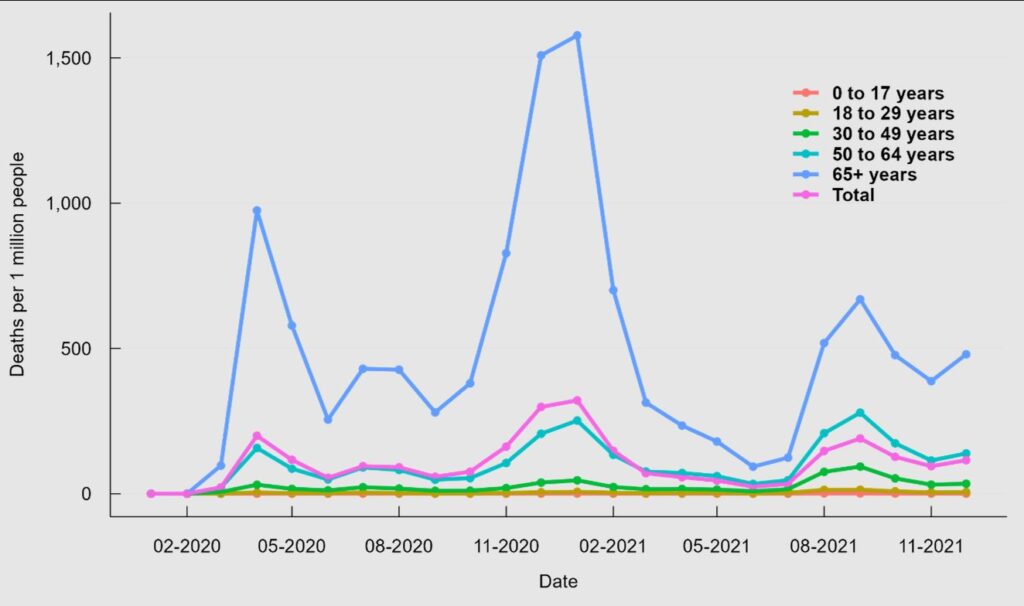 Retrying that animation:@zorinaq made a brilliant chart in 2020 showing how Covid’s IFR compared to flu at different ages

I’ve used age-specific rates of infection and death (from @ONS, of course) to see how the gap has narrowed in England pic.twitter.com/hjTa3nRWJE

In December, Cornell University shut down its Ithaca, New York, campus, where it has about 25,600 students, despite the university’s overall sudent vaccination rate of 99%.

Entire college of @Cornell shut down despite:

2. Omicron is highly contagious, but symptoms tend to be "generally mild"

Jeremy Redfern, the press secretary for Florida’s Department of Health, noted the findings on Cornell University.

Mask mandates failed (go figure) and 98.6% of cases were breakthroughs.https://t.co/YBcu8PIyNM

While some objected to Redfern’s observation that mask mandates failed to slow the spread at Cornell University, that is a safe conclusion that has been shown by multiple academic scientific studies.

A peer-reviewed study published in the journal Cureus in April is definitive: “These findings indicate that countries with high levels of mask compliance did not perform better than those with low mask usage.”

Thus, Cornell University should learn a hard lesson about making assumptions without scientific data to back them up and carrying out oppressive policies that violate students’ rights.

Academia exists to challenge prevailing wisdom and to foster independent thinking. That America’s universities no longer appear capable of performing such a basic role in society is a standing warning about the dangers of ‘group think,’ as well as a clarion call that academic reform is urgently needed.

‘The City’s Case Against Us is Crumbling’: NYC Retreats on Firing 4,650 NYPD Who Refused the Jab as Crime Surges