DeSantis Blasts Democrats for Trying to Tie Him to Neo-Nazis, Anti-Semitic Rallies in Florida 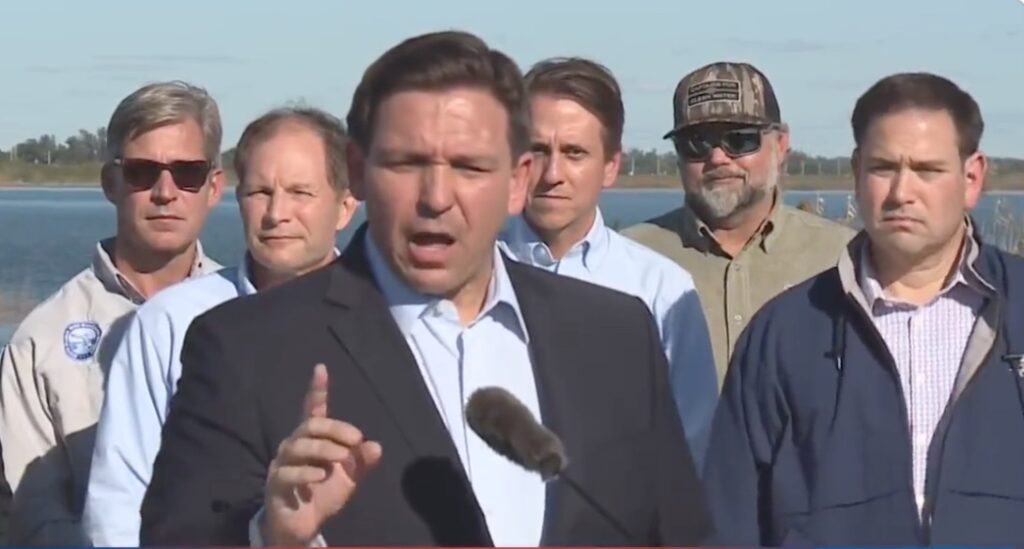 In affairs of heart, as the old idiom says, “you always hurt the one you love.” In affairs of the Democrat Party, you always (pick one or more) slam, discredit, misrepresent, dismiss, lie about the one(s) you fear.

Arguably, Florida Gov. Ron DeSantis sits atop the list of conservatives most feared by the Democrats and their “mainstream” media sock puppets.

Our story begins with a small group of self-proclaimed Nazis yelling anti-Semitic nonsense and waving a swastika flag outside a Florida shopping plaza and from a highway overpass over the weekend.

As reported by U.S. News & World Report, the demonstrators, decked out in Nazi garb, protested at an intersection near the University of Central Florida on Saturday and on a highway overpass on Sunday. Authorities from the Florida Department of Highway Safety and Motor Vehicles and the Florida Highway Patrol said in a statement they had disbanded the group on the overpass.

Unacceptable and disgusting. Do you see this, @GovRonDeSantis? Condemn it and get this hate off our streets!! https://t.co/Re5I2wKKSs

Orlando Democrat Mayor Buddy Dyer and other elected leaders issued statements declaring that anti-Semitism and hatred have no place in Florida (as opposed to areas where anti-Semitism does have a place?), with Dyer tweeting:

“Despite displays of hate in Central Florida this weekend, our collective commitment to building an inclusive, compassionate community for all is stronger than ever.”

On cue, Democrat after Democrat ridiculously blamed DeSantis for the anti-Semitic protests because, you know, that’s what Democrats do, without fail — every time they see (or concoct) an opportunity to tie a Republican (if not the entire Republican Party) to anything they deem “racist,” “white supremacist,” “Islamophobic,” “homophobic,” or anything else they exploit, solely for political expediency.

In this case, it was DeSantis’s “failure” to rush to condemn the anemic protest. In addition, his press secretary on Sunday night appeared to question whether the Nazi flag was in fact the effort of neo-Nazis. Christian Pushaw asked on Twitter: “Do we even know they’re Nazis?”

On Monday, DeSantis returned fire against the Democrats for trying to “smear” him, while saying the Democrat Party “elevated anti-Semites to the halls of Congress like [Minnsesota Congresswoman] Ilhan Omar.”

“What I’m gonna say is, these people — these Democrats who tried to use this as some type of political issue to try to smear me, as if I had something to do with it? We’re not playing their game. Some jackasses doing this on the street — first of all, state law enforcement is gonna hold them accountable … they’re absolutely gonna do that and they should do that.

“But I’m not gonna have people try to smear me that belong to a political party that has elevated anti-Semites to the Halls of Congress like Ilhan Omar; that have played footsie with the BDS Movement; that even have people in their party that have even cavorted with [Nation of Islam leader Louis] Farrakhan.

“No. We’re gonna take our record in Florida and what we’ve done — signed the strongest anti-Semitism bill in the country; we’ve stood and stared down companies that were indulged in BDS, like Airbnb, and we’ve won.”

DeSantis went on to note “record funding for Jewish day-schools,” and “the strongest relationship between Florida and Israel that we’ve ever had.”

He accuses Democrats of trying to "smear" him, and says the party has "elevated anti-Semites to the halls of Congress like @IlhanMN" (1/2) @WFLA #WFLANow pic.twitter.com/voOfepsojj

As I suggested at the top, it’s easy to determine who the Democrats most fear by watching who they most attack — and how histrionically they attack them.