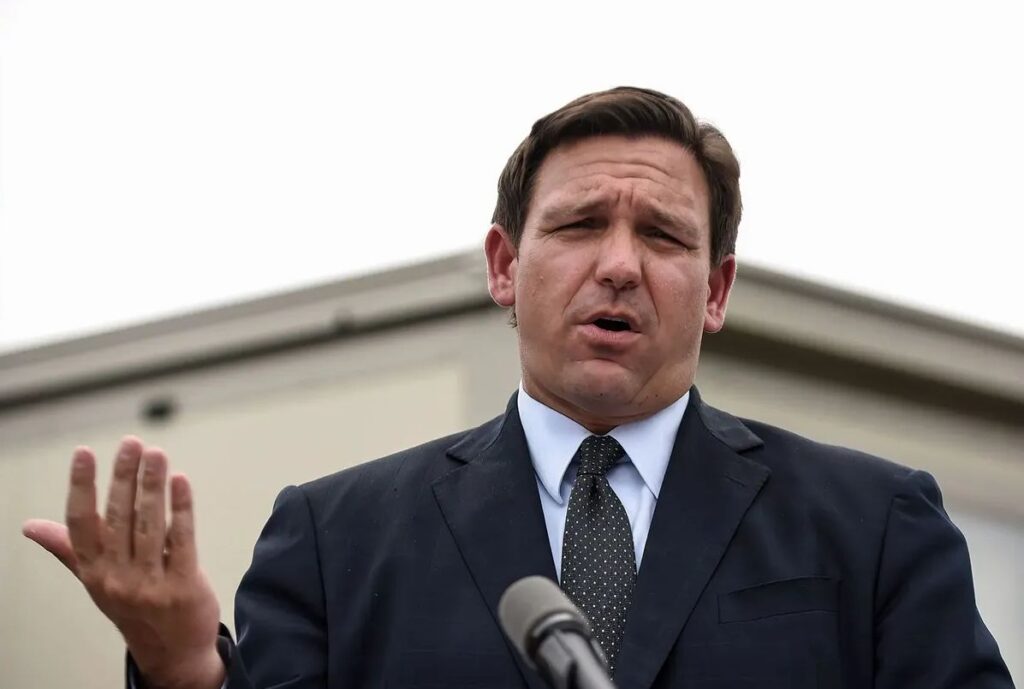 Florida Governor Ron DeSantis continues to push back hard against the Woke politics that is spreading across America. And the radical left isn’t liking it one bit.

One of the frontlines in the increasingly belligerent culture war has been the concerted attempt by the radical left to ‘groom’ kids into the LGBTQIA2+ lifestyle, particularly by glamorizing it with schoolchildren.

Drag queens now routinely visit schools to talk about how wonderful their profession is and school libraries now regularly stock borderline pornographic material that entices children to try out homosexual behavior. The LGBTQ material can at times be so sexually explicit that school board members forbid it from being discussed at their meetings.

Guys you did not see a video of a mom’s mic getting cut off at a board meeting. This is all a figment of your imagination. The fact checkers said so. https://t.co/k8qSriIMWD https://t.co/K8SXIUs4eu pic.twitter.com/r4UeG3P9hm

Amid all of the left’s intentionally caused social tumult, Florida’s State Surgeon General Joseph Ladapo has told the Florida Board of Medicine that it needs to strongly reconsider its position on transgender surgery and treatments. Ladapo stated the following in his letter issued Thursday.

“On April 20, 2022, the Florida Department of Health (Department) released guidance on the treatment of gender dysphoria for children and adolescents,” the letter states.

“As State Surgeon General, I recommended against certain pharmaceutical, non-pharmaceutical, and surgical treatments for gender dysphoria,” Ladapo continues. “The recommendations are based on a lack of conclusive evidence and the high risk for long-term, irreversible harms from these treatments. Since then, the Agency for Health Care Administration (Agency) has conducted a full review to determine if these treatments are ‘consistent with generally accepted professional medical standards (GAPMS) and not experimental or investigational’.”

“The Agency’s review included an overview of systematic reviews on puberty blockers, cross-sex hormones, surgeries, or a combination of interventions,” he adds. “While some professional organizations, such as the American Academy of Pediatrics and the Endocrine Society, recommend these treatments for ‘gender affirming’ care, the scientific evidence supporting these complex medical interventions is extraordinarily weak.”

“For instance, the overview conducted by Dr. Brignardello-Peterson and Dr. Wiercioch states that ‘there is great uncertainty about the effects of puberty blockers, cross-sex hormones, and surgeries in young people with gender dysphoria’,” Ladapo notes. “The current standards set by numerous professional organizations appear to follow a preferred political ideology instead of the highest level of generally accepted medical science.”

“Florida must do more to protect children from politics-based medicine,” he argues. “Otherwise, children and adolescents in our state will continue to face a substantial risk of long-term harm. The Agency ultimately concluded that ‘Available medical literature provides insufficient evidence that sex reassignment through medical interventions is a safe and effective treatment for gender dysphoria.’ I encourage the Board to review the Agency’s findings and the Department’s guidance to establish a standard of care for these complex and irreversible procedures.”

The Woke left instantly burst into a hyperbolic frenzy over the guidance.

hey its one of the top gop contenders to be our next fascist president brutalizing a group of our fellow americans, nobody bother to say anything about it. just let it slide. its cool. so anyways, the deficit… https://t.co/dtgVp7u9kW

He is BLATANTLY targeting #LGBTQIA with his obvious hate.

Florida, we will not tolerate this hatred! He is NOT A GOVERNOR for ALL FLORIDIANS but only for the “SELECT FEW”#RemoveRon #VoteDeSantisOut #DemVoice1 #wtpBLUE https://t.co/57vhYpYgxN

FLORIDA- VOTE THIS MONSTER OUT OF OFFICE.
If he is not stopped in Florida – he has plans to run for President in 2024. #DeSantisDestroysFlorida #VoteBlueIn2022 #DemVoice1https://t.co/oN0uYZ7QYp

Ron DeSantis is a much more competent version of Trump. His attacks on free speech and LGBTQ+ Floridians—and totalitarian reflexes—are alarming https://t.co/PW5jXvrnws

But at a time when childhood anxiety and depression are skyrocketing through the roof, many are questioning whether the escalating trend of youth seeking transgender surgery and treatment is a reflection of psychosocial vulnerability that has translated into higher incidence rates of gender dysphoria.

Children are not capable of making life-altering decisions. That is why individuals need to be 18 years old in order to vote, buy alcohol, join the military, and purchase firearms. Yet radical parents are often making decisions for their children that may set them on a track for psychological disorders and suicidal ideation. This is partly because gender-transitioning implies a rejection of the self as nature made it.

According to the Journal of Interpersonal Violence, “[d]ata indicate that 82% of transgender individuals have considered killing themselves and 40% have attempted suicide, with suicidality highest among transgender youth.”

Patients expressing gender dysphoria are obviously highly sensitive individuals with psychological vulnerabilities; it behooves psychiatrists and mental health professionals that they assess patient outcomes for gender-transitioning patients based on scientific data, and not based on the political pressure that is being wielded by ideologically driven radical activist groups.