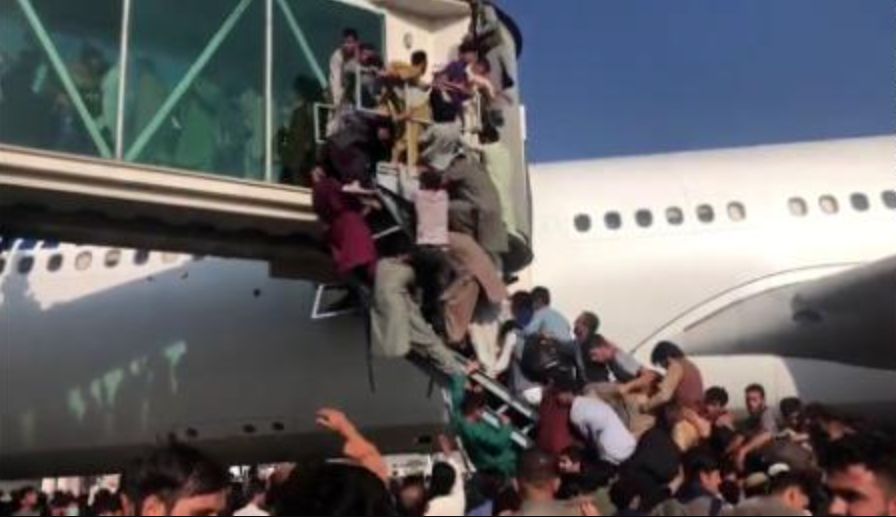 A confidential memo sent by diplomats in Kabul to the State Department via dissent cable more than a month before Biden’s military troop withdrawal warned the nation would collapse into the hands of the Taliban if troops were suddenly withdrawn without adequate planning.

“An internal State Department memo last month warned top agency officials of the potential collapse of Kabul soon after the U.S.’s Aug. 31 troop withdrawal deadline in Afghanistan,” WSJ reported, citing a U.S. official and a person familiar with the document.

“The classified cable represents the clearest evidence yet that the administration had been warned by its own officials on the ground that the Taliban’s advance was imminent and Afghanistan’s military may be unable to stop it,” the report added.

“The cable, sent via the State Department’s confidential dissent channel, warned of rapid territorial gains by the Taliban and the subsequent collapse of Afghan security forces, and offered recommendations on ways to mitigate the crisis and speed up an evacuation,” WSJ noted.

“The cable, dated July 13, also called for the State Department to use tougher language in describing the atrocities being committed by the Taliban,” the report added, citing one source.

CNN’s criticism of President Biden’s withdrawal of Afghan troops against the advice of his top military commanders also continued on Thursday.

Jake Tapper reported that diplomats in Kabul warned the Biden administration about an impending ‘possible catastrophe’ if there was a precipitous military withdrawal.

“State Department officials tell CNN that more than a month before Afghanistan collapsed to the Taliban, a group of U.S. diplomats in Kabul warned Secretary of State Tony Blinken of a ‘possible catastrophe’ in the country and urged the Biden administration to do much more to get Afghan allies out of there,” Tapper said.

“This was a dissent memo written mostly by diplomats who were at the embassy in Kabul telling the State Department and telling Secretary of State Tony blinken that they thought that there should be more action taken on behalf of the State Department to prepare for what they saw as the eventual evacuation of these Afghans,” reporter Kylie Atwood added.

“These Afghans applying for Visas and refugee status in the United States,” Atwood added. “Of course, the backdrop being they were on the ground, they were watching what was happening in the country in the months following President Biden’s announcement that the U.S. was going to withdraw their troops.”

“These Taliban gains that were mounting across the country,” Atwood went on. “They were urging the State Department to do more. Now, the reason that this is significant is because, first of all, a dissent memo is only written by diplomats if they feel that their voice is not being heard.”

“It is a way for them to dissent to the Secretary of State with what is happening at that moment in time hoping that changes can be made,” she continued. “Second of all, it is important because we hear President Biden in his interview just recently with ABC not saying that anything went wrong in terms of the U.S. withdrawal here.”

“It is very clear now, as we are seeing in this dissent memo, that there were State Department officials saying look, things are going to happen,” Atwood said. “It could get bad, but let’s take steps now so that we can mitigate against the worst case scenario, against a case scenario where we are totally out of control, where it is chaos and we’re watching that chaos unfold right now at the airport in Kabul.”

“Can you explain the rationale for why President Biden went against the advice of military commanders who recommended leaving 2,500 troops on the ground in Afghanistan?” Fox News’ White House correspondent Kristin Fisher asked.

“Well, I think that’s an over-characterization of every military leader, and I don’t think they’ve all provided their point of view on what their advice is, and we’ll keep that private,” Psaki replied without providing a reason.

Earlier, President Biden denied in an interview with ABC News’ George Stephanopoulos that he was advised to leave 2,500 troops in Afghanistan.

“Your top military advisers warned against withdrawing on this timeline. They wanted you to keep about 2,500 troops,” Stephanopoulos said.

“They didn’t tell you that they wanted troops to stay?” Stephanopoulos followed up.

“No. Not at — not in terms of whether we were going to get out in a timeframe all troops (sic),” Biden said. “They didn’t argue against that.”

“So no one told — your military advisors did not tell you, ‘No, we should just keep 2,500 troops. It’s been a stable situation for the last several years. We can do that. We can continue to do that’?” Stephanopoulos asked.

“No. No one said that to me that I can recall,” Biden said. “Look, George, the reason why it’s been stable for a year is because the last president said, ‘We’re leaving. And here’s the deal I wanna make with you, Taliban. We’re agreeing to leave if you agree not to attack us between now and the time we leave on May the 1st.’”

The military advice given to President Biden was detailed in a Wall Street Journal article following his Monday speech on the Afghanistan withdrawal. It is an indictment of the Commander-in-Chief’s decision and shows that the horrific aftermath is due to Biden’s failure to properly assess the risks of an immediate military withdrawal.