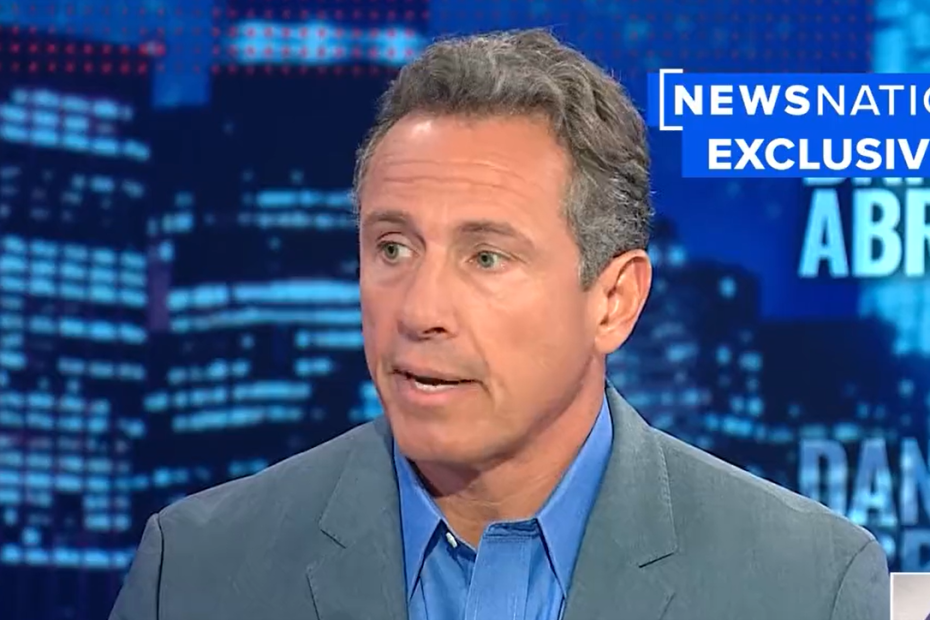 Ex-CNN host Chris Cuomo, who was fired for assisting with his brother Andrew Cuomo’s defense against sexual harassment accusers, has been rehired.

Cuomo sat down with long-time friend Dan Abrams in an interview accompanying NewsNation’s announcement it is hiring the former CNN host.

“I want to build something special here,” Cuomo said.  The former CNN host said he wasn’t going back to the “big game” and wanted to be a part of “insurgent media.”

Cami Mondeaux of the Washington Examiner reported on Chris Cuomo’s reappearance in the media.

“Although Chris Cuomo acknowledged he had spoken to fellow journalists covering the story, he denied using his position to influence coverage of his brother,” Mondeaux notes.

“I never contacted any media who were covering my brother to try to affect their coverage,” Cuomo said. “I talk to people in the media all the time. They’re most of the people in my life.”

“But I think the distinction has a meaningful difference,” Chris Cuomo answered. “The concern would be not that I called you and said, ‘What do you think is going on here?’ It’s me calling you and saying, ‘Hey, tonight in your segment, I hope you remember that [etc.].'”

“NewsNation has earned high praise from multiple media watchdog groups by remaining true to its mission to bring viewers the fact-based news that impacts their lives without opinion or bias,” remarked Sean Compton, president of networks for Nexstar Media. “Chris joins our growing team of seasoned, award-winning journalists and will further our efforts to continue to ensure fairness and transparency in our news reporting and talk shows.”

Cuomo had not only lost his job at CNN, but also his SiriusXM show after the revelations about his unethical behavior with his former New York governor brother Andrew Cuomo came to light.

Chris Cuomo had hosted “Let’s Get After It with Chris Cuomo” at noon ET on SiriusXM.

About an hour after the program ended, Cuomo announced he was leaving indefinitely, saying he needed “to take a stop back and focus on what comes next.”

“The way my time ended at CNN was hard,” Cuomo said in a statement. “While I have a thick skin, I also have a family, for which this past week has been extraordinarily difficult.”

“So, right now, I have to take a step back and focus on what comes next,” he added.

Cuomo was officially fired from CNN in December.

“Embattled CNN anchor Chris Cuomo has been fired by the network, in the wake of new revelations about his close involvement with the political woes of his brother, former Gov. Andrew Cuomo,” the NY Post reported.

CNN confirmed the firing in a statement to the NY Post, and said that Cuomo had been “terminated … effective immediately” as an outside law firm continued to investigate “his involvement with his brother’s defense.”

Internal documents showed that Cuomo abused his journalistic position to attempt to uncover information about a sexual harrassment accuser who had leveled allegations against his brother former New York Governor Andrew Cuomo.

“When Chris admitted to us that he had offered advice to his brother’s staff, he broke our rules and we acknowledged that publicly,” CNN said. “But we also appreciated the unique position he was in and understood his need to put family first and job second.”

“However, these documents point to a greater level of involvement in his brother’s efforts than we previously knew,” the network added. “As a result, we have suspended Chris indefinitely, pending further evaluation.”

CNN’s airing of interviews between the Cuomo brothers for months demonstrated the cable news network had no real standards, as its rehiring of disgraced legal analyst Jeffrey Toobin proved.

Chris Cuomo’s hiring at NewsNation proves that when it comes to journalists who carry water for the left, there is no such thing as accountability.