Medical authorities are sounding the alarms over a sudden wave of cardiac arrests affecting young people that is being called SADS for Sudden Adult Death Syndrome or Sudden Arrhythmic Death Syndrome.

SADS is an “umbrella term to describe unexpected deaths in young people” usually under 40. The Royal Australian College of General Practitioners (RACGP) has adopted the term when an autopsy is unable to determine a cause of death. The Australia government is not yet providing data on the number of SADS cases, but it is significant enough to urge all citizens under age 40 to immediately seek heart screenings.

Melbourne’s Baker Heart and Diabetes Institute, however, is developing the country’s first SADS registry. Its initial reports are alarming.

“In our registry, there are approximately 750 cases per year of people aged under 50 in Victoria suddenly having their heart stop (a cardiac arrest),” a spokeswoman told news.com.au. “Of these, approximately 100 young people per year will have no cause found even after extensive investigations such as a full autopsy (the SADS phenomenon).”

Cardiologist and researcher Dr. Elizabeth Paratz told the Australian publication that Baker’s registry was the first in Australia. It is one of only a few known databases in the world to combine ambulance, hospital, and forensics information.

“(It allows you to see) people have had the cardiac arrest and no cause was found on the back end,” Dr. Paratz said.

She added that there is a lack of clarity on the SADS phenomenon because “a lot of it takes place outside of traditional medical settings”.

“The majority of these SADS events, 90 per cent, occur outside the hospital – the person doesn’t make it – so it’s actually ambulance staff and forensics caring for the bulk of these patients,” she said.

“I think even doctors underestimate it. We only see the 10 per cent who survive and make it to hospital,” she added. “We only see the tip of the iceberg ourselves.”

The diagnosis is unfortunate for family members of the deceased because SADS is a “very hard entity to grasp” due to it being a “diagnosis of nothing,” she continued.

“All you know is it wasn’t drugs, suicide, trauma or heart attack,” Dr Paratz said. “You’re still left wondering what it was.”

“If someone has a heart attack and you do an autopsy you might see a big clot, that’s a positive finding, but when someone’s had one of these SADS events, the heart is pristine,” Dr. Paratz said. “It’s really hard to know what to do.”

It is critical to note that Long Covid can almost certainly be ruled out as driving the sudden wave of SADS cases.

In late May, Nature Medicine published a new report that shows vaccination does not appear to provide nearly the amount of protection against “long Covid” as was previously claimed. The study drew on a large database and examined those with BTI (breakthrough infections) as well as control groups with contemporary and historical cases of Covid-19.

“In this study, we used the US Department of Veterans Affairs national healthcare databases to build a cohort of 33,940 individuals with BTI and several controls of people without evidence of SARS-CoV-2 infection, including contemporary (n = 4,983,491), historical (n = 5,785,273) and vaccinated (n = 2,566,369) controls. At 6 months after infection, we show that, beyond the first 30 days of illness, compared to contemporary controls, people with BTI exhibited a higher risk of death (hazard ratio (HR) = 1.75, 95% confidence interval (CI): 1.59, 1.93) and incident post-acute sequelae (HR = 1.50, 95% CI: 1.46, 1.54), including cardiovascular, coagulation and hematologic, gastrointestinal, kidney, mental health, metabolic, musculoskeletal and neurologic disorders.”

The Covid vaccines were only 15% effective at preventing “Long Covid” (or PASC), which is a term used to describe a cluster of real, but primarily psychological phenomena among a small minority of patients that have recovered from a Covid-19 infection. 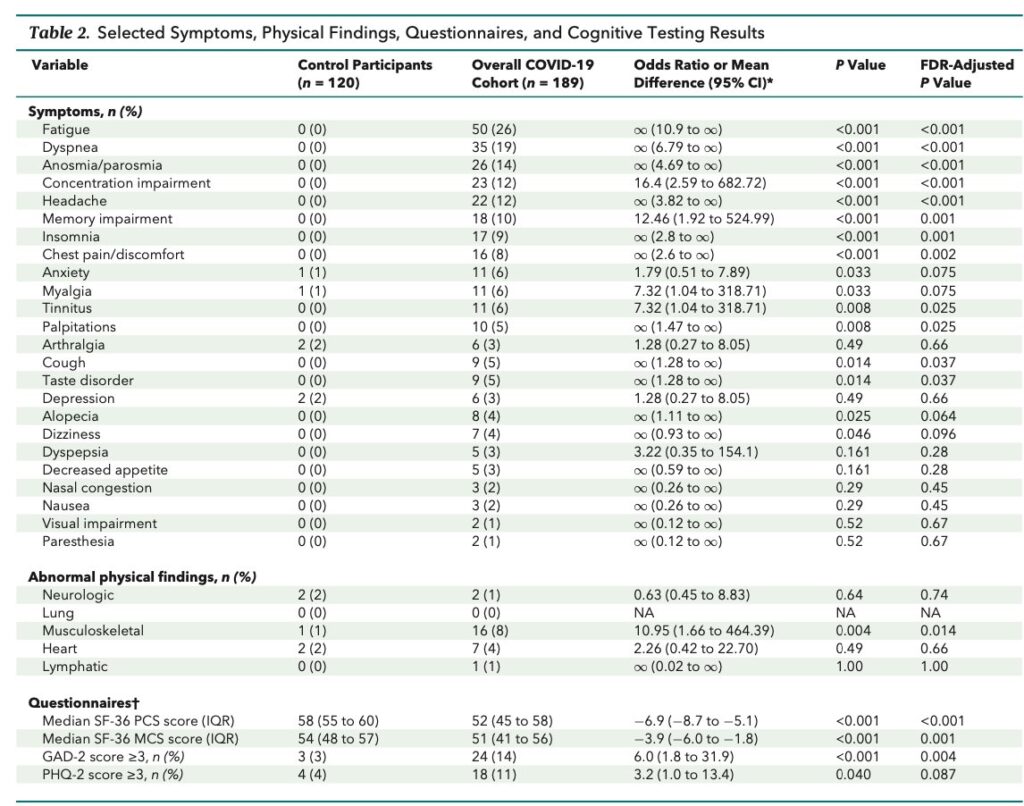 As Gaffney pointed out: “On the other hand, numerous biomarkers showed no difference between those post-COVID and controls, including tests for”:

“Next, they report lung function tests,” Gaffney goes on. “Again, no differences, unsurprising given that the post-COVID patients mostly did not have severe pneumonia which damages the lungs.”

“In terms of heart function, assessed with ultrasound: Again, no differences between post-COVID subjects and controls,” he contiues. “There was no difference in percent with low oxygen levels either. There was a distance in walk distance over 6-minutes compared to controls: 560m vs. 595m.”

“There were no differences in neurocognitive testing between the groups, e.g. in processing speed, episodic memory, or executive functioning,” Gaffney said. “However, quality of life, both physical and in terms of mental health, was much lower post-COVID compared to controls. Notably, post-COVID patients were much more likely to have high anxiety scores and depression scores, particularly anxiety with PASC.”

“How about evidence of persistent inflammation or infection post-COVID?” Gaffney continued. “They assessed numerous inflammatory biomarkers (e.g. macrophage inflammatory protein-1b , INF-G, TNF-alpha) and found no difference in levels of more than 10 of them. A single marker was higher in COVID-19 subjects vs. controls, but not in PASC vs. non-PASC.”

“To summarize, there was a large burden of symptoms & worse mental health post-COVID (particularly among those with PASC) but no difference in objective neurocognition, & no evidence of ‘ongoing systemic inflammation or immune activation’ or any organ damage,” Gaffney adds.

Thus, it would be premature to assume that the increase in cardiac arrests is being driven in any significant way by Long Covid. However, mRNA vaccines have been directly tied to heart inflammation cases, making them a reasonable suspect for SADS.

Over 84% of the Australian population has been vaccinated.