The Department of Justice in a near-midnight filing on Tuesday displayed its opposition to Donald Trump’s motion that the court grant him legal relief and a ‘special master’ to oversee that the documents the FBI seized at Mar-a-Lago on Aug. 8 do not violate executive privilege or attorney-client privilege.

The DOJ contends that executive privilege does not apply to the documents; for additional measure, the department attached a photo of ‘top secret’ and classified documents at Mar-a-Lago. 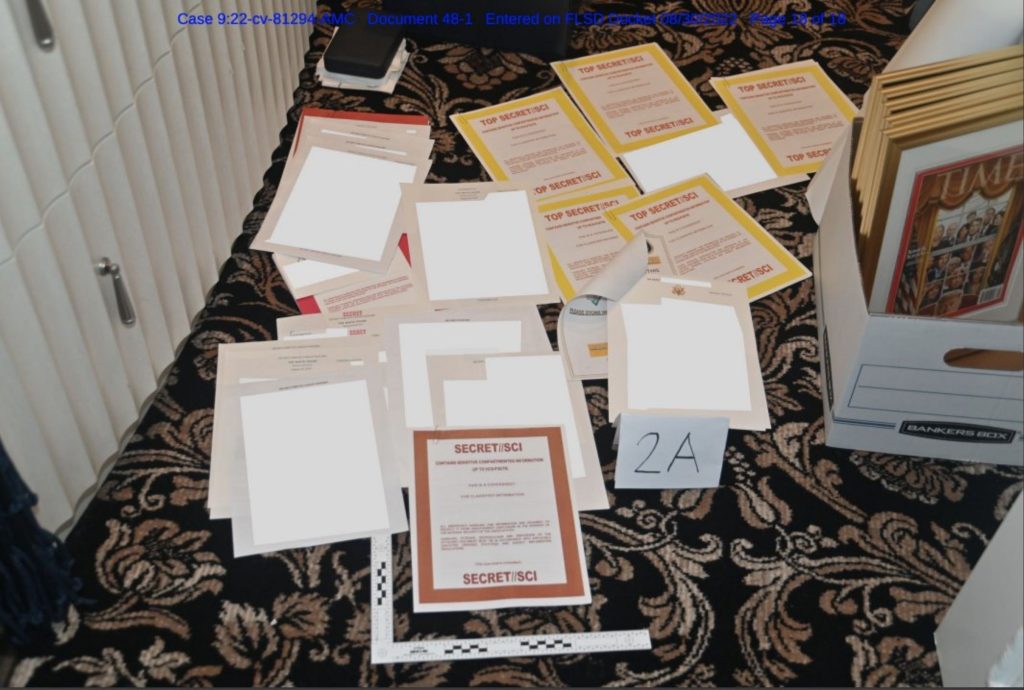 The DOJ stated that it had “evidence that government records were likely concealed and removed from the Storage Room and that efforts were likely taken to obstruct the government’s investigation.”

The department also claimed the top secret and classified documents were not originally discussed at a June 3 meeting at Mar-a-Lago with Donald Trump. The DOJ submitted “evidence indicating that boxes formerly in the Storage Room were not returned prior to counsel’s review.”

“That the FBI, in a matter of hours, recovered twice as many documents with classification markings as the ‘diligent search’ that the former President’s counsel and other representatives had weeks to perform calls into serious question the representations made in the June 3 certification and casts doubt on the extent of cooperation in this matter,” the brief argued.

The Department of Justice claimed in the amicus brief that it had a pressing interest in reviewing the Mar-a-Lago records with a sense of urgency due to their potential impact on national security.

“The Executive Branch seeks the seized records to pursue a criminal investigation of the improper treatment of government records, including records containing information classified as ‘Top Secret,’ and to conduct a damage assessment and take remedial steps based upon the potential disclosure of those materials,” the DOJ argued. “These are essential, constitutional functions that the Executive Branch cannot adequately perform without access to the seized records.”

“And, in particular, there is great urgency in conducting a thorough damage assessment of any potential mistreatment of classified materials, which militates against the additional delay that would inevitably result from the appointment of a special master in this matter,” the legal brief continued. “To indulge former President Trump’s assertions of executive privilege through the appointment of a special master would simply put off the inevitable, and harm significant national interests in the process by delaying a criminal investigation and intelligence community assessment of damage.”

The FBI raid came more than eighteen months into Biden’s administration, less than a hundred days before the midterm elections, months after a June meeting with Trump regarding the documents, weeks after Attorney General Merrick Garland officially started deliberating on the legal matter, and days after the search warrant was authorized.

The Department of Justice could display a greater sense of urgency by explaining why such a grave national security matter took over a year to be recognized and months to be acted upon. Furthermore, it could also explain why the timing of the action isn’t political, as it comes in the wake of the January 6 committee hearings and prior to the 2022 election.

It is an open question why the DOJ thought it was necessary to attach a staged photograph that is not sealed showing “top secret” and “classified” documents so sensitive that a special master should arguably not be privy to them. Even when the Department of Justice presses forth a potentially compelling argument, it undermines its own case by displaying yet again that everything with the Merrick Garland-led Justice department is political.