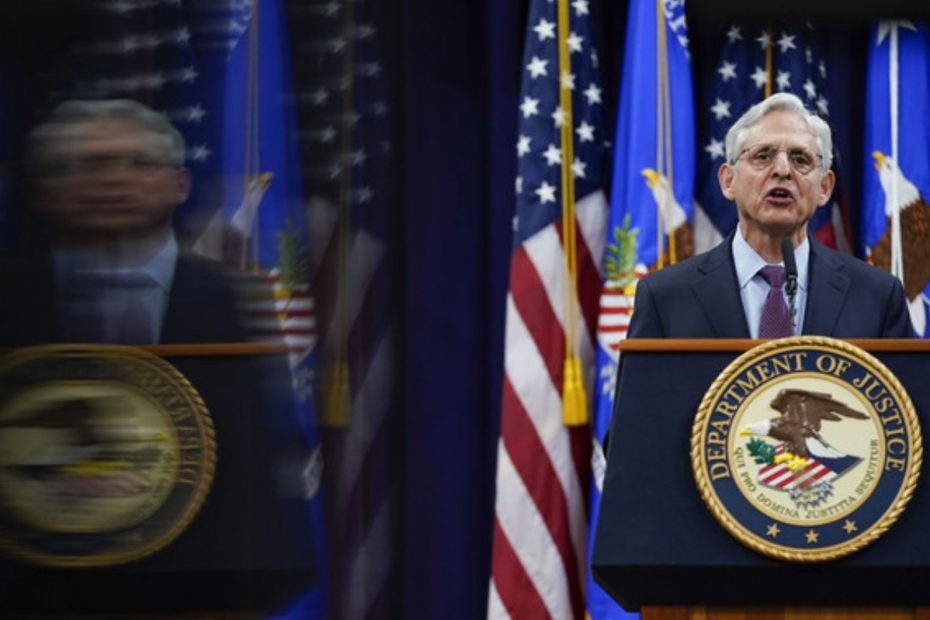 The Merrick Garland-led weaponized Justice Department has sent forth a new memo to chill any ideas that ‘whistleblowers’ might have about coming forward to contact members of Congress about Biden administration corruption.

‘Don’t do it. Don’t say a word.’ That is the thrust of the message that Attorney General Merrick Garland sent out to DOJ employees on Tuesday.

“In light of the confirmation earlier this month of Carlos Uriarte as Assistant Attorney General for the Office of Legislative Affairs (OLA), this is an appropriate time to reaffirm and remind all Department personnel of our existing policies regarding communications between the Justice Department and Congress,” Attorney General Garland’s memo says. “These policies, which can be found at Justice Manual 1-8.000, may be supplemented from time to time with more specific directions for particular components.”

“Like the policies regarding communications with the White House, these policies “are designed to protect our criminal and civil law enforcement decisions, and our legal judgments, from partisan or other inappropriate influences, whether real or perceived, direct or indirect,” Garland claimed.

“No department employee may communicate with Senators, Representatives, congressional committees, or congressional staff without advance coordination, consultation, and approval by OLA,” the memo adds.

The Department of Justice’s policy in question, as detailed in Justice Manual 1-8.000, is as follows:

The Assistant Attorney General (AAG) for the Office of Legislative Affairs (OLA) is responsible for communications between Congress and the Department under the authority of the Attorney General and the direction of the Deputy Attorney General. See 28 C.F.R. § 0.27. Communications between the Department and Congress, including those pertaining to policy, legislation, political appointments, nominations, intergovernmental and public liaison relations, cases and investigations, and administrative matters, will be managed or coordinated by OLA to ensure that relevant Department or Executive Branch interests are fully protected. Communication between OLA and Department components may be aided by designated component or law enforcement congressional liaisons, as appropriate. However, all component and law enforcement congressional liaisons will follow the direction of the AAG of OLA with regard to communications with Congress.

The GOP’s House Judiciary Committee members did not fail to read between the lines of Attorney General Merrick Garland’s memo.

Why is Merrick Garland TERRIFIED that whistleblowers are speaking to Congress? https://t.co/VB2ZBvTnkO

“Why is Merrick Garland TERRIFIED that whistleblowers are speaking to Congress?” House Judiciary GOP asked on Twitter.

The DOJ memo reminding employees about the departmental policy comes in the wake of reports of “dozens” of whistleblowers that have contacted now-minority House GOP Oversight Committee members they intend to come forward to expose the policized Biden administration when there is more protection from retaliation.

Kentucky Congressman James Comer, Ranking Member of the House Oversight Committee, indicated he has been contacted by “dozens” of whistleblowers — not only from the FBI, but from the top law enforcement agencies as a whole, including Border Patrol and Homeland Security.

“So what we’ve done on the House Oversight Committee, along with the Judiciary Committee and Oversight — and the Energy and Commerce committee, we’ve also requested correspondence between Facebook and the FBI, as well as between Facebook and the Democrat National Committee,” Comer continued. “Because we have pretty good information that would lead me to believe that the not only did the FBI communicate with Zuckerberg, but also the Democrat National Committee followed up with Zuckerberg after the FBI gave him that warning. So we believe this was a coordinated effort by the Biden campaign to do everything in their ability to spook Facebook, to censor conservatives, especially the Hunter Biden story, which we now know was 100% true.”

“Congressman, did I hear you correctly that there are dozens of whistle blowers?” Sean Hannity asked. “Can you, can you elaborate on that from the FBI? Because we know dozen Senator Grassley and Johnson of Congressman Jordan have said from the FBI specifically.”

“Dozens of whistleblowers from Border Patrol, from FBI, from Homeland Security,” Comer responded. “We’ve got a problem with the law enforcement community in this Biden administration. I believe they’re hopeful that the Republicans will retake the majority and there will finally be oversight and this administration will finally be held accountable for the mistakes they’re making at the border and the mistakes they’re making with the FBI.”

“You know, most FBI agents are good people,” Comer said. “They have pride as they should in their agency. But the American people are losing confidence in the FBI quicker than the Democrats can print money in Washington right now. And that’s disturbing to the incredible FBI agents.”

Rep. James Comer is poised to become the Chair of the House Oversight Committee and he intends to lead investigations into several pressing matters that are in the public interest.

“The third-term Kentucky Republican poised to head the House Oversight Committee next year has two major investigations top of mind: the business dealings of Hunter Biden and the origins of Covid,” Politico reported in early August. “With that powerful gavel, Comer will be one of the most pivotal figures in directing the party’s pent-up frustration and aggression toward Democrats after years in the minority.”

“I’m not going to be chasing some of these right-wing blogs and some of their conspiracy theories,” Comer told Politico. “We’ll look into anything, but we’re not going to declare a probe or an investigation unless we have proof.”

House Republicans are currently investigating the extent of coordination between the Biden White House and the National Archives prior to the FBI’s August raid on Mar-a-Lago to seize Trump documents. As earlier reported, the Republicans are also investigating the extent of the FBI’s 2020 election interference, based on disturbing new revelations from Meta/Facebook CEO Mark Zuckerberg.

Merrick Garland has every reason to be concerned about ‘whistleblowers.’ The Biden Justice Department is undoubtedly the most politicized in history — bar none. There is plenty of corruption to be exposed. And it will all come out. Eventually.