Donald Trump has issued a blistering statement calling on Americans to boycott “woke companies” that are interfering with our system of representative government and seeking to compromise free and fair elections. 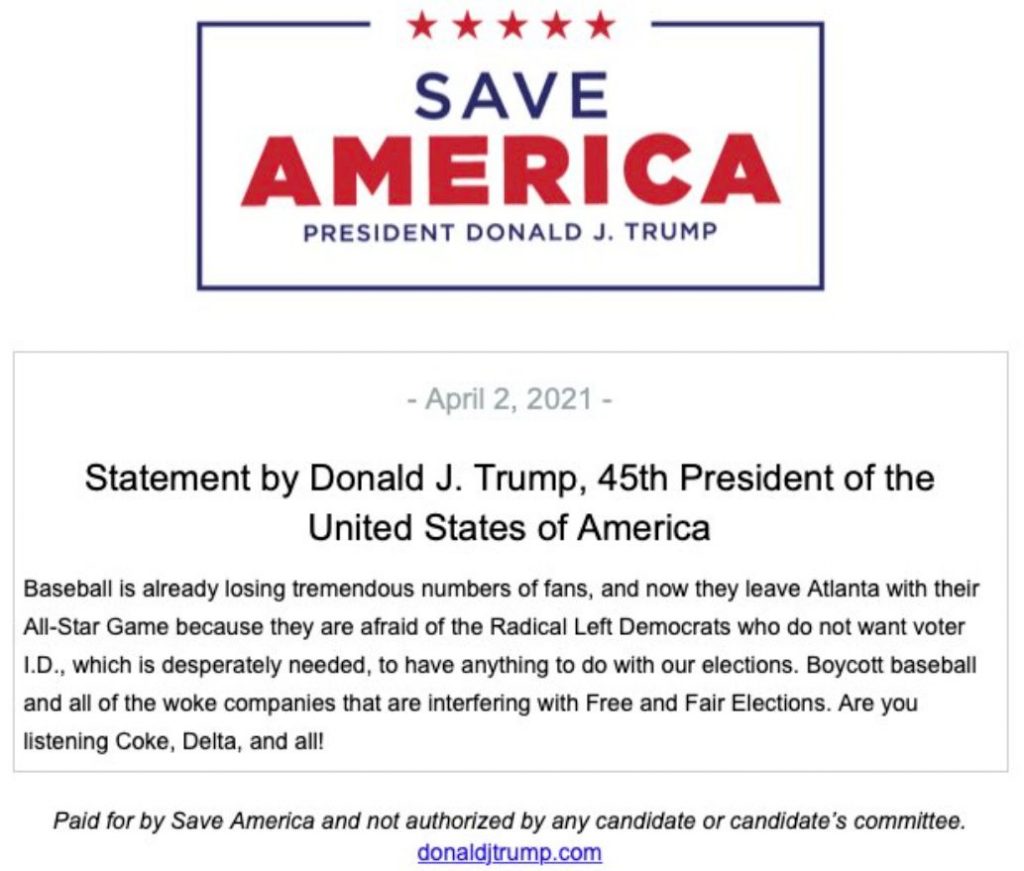 “Baseball is already losing a tremendous number of fans, and now they leave Atlanta with their All-Star Game because they are afraid of the Radical Left Democrats who do not want voter I.D., which is desperately needed, to have anything to do with our elections.”

“Boycott baseball and all of the woke companies that are interfering with Free and Fair Elections,” Trump added. “Are you listening, Coke, Delta, and all!”

Senator Ted Cruz is calling on Americans to go after the sponsors of Major League baseball.

These are MLB’s corporate sponsors, who pressured to pull the All Star game out of Atlanta.

Do all of them oppose voter ID?

Are all of them willing to be the woke enforcers of the corrupt Democratic Party?

And do all hate the 75m who voted for Trump? https://t.co/cuOXYFO9Gv

“These are MLB’s corporate sponsors, who pressured to pull the All Star game out of Atlanta,” Senator Cruz wrote. “Do all of them oppose voter ID? Are all of them willing to be the woke enforcers of the corrupt Democratic Party? And do all hate the 75m who voted for Trump?”

The MLB sponsors include Chevrolet, Budweiser, Bank of America, Google, Geico and numerous others.

Earlier today, MLB Commissioner Robert Mandred issued a statement announcing that the All-Star Game was being pulled from Atlanta over Georgia’s election law.

“I have decided that the best way to demonstrate our values as a sport is relocating this year’s All-Star Game and MLB Draft,” Manfred said. “Major League Baseball fundamentally supports voting rights for all Americans and opposes restrictions to the ballot box.”

It turns out that there is virtually zero data evidence to support the claim that voter ID laws reduce election turnout.

It is even worse that MLB’s statement makes divisive, evidence-free claims; it is blatantly hypocritical.

According to the Brennan Center for Justice, 11% of Americans do not have a current, unexpired government-issued ID with a photograph, such as a driver’s license or photo ID. According to Pew Research, 19% of Americans currently lack cell phones.

Nonetheless, Major League Baseball stadiums ofter require photographic IDs, mobile tickets, and even proof of vaccination record or negative COVID test results to enter. In New York, there is even an Excelsior Pass to track those who have received vaccines, which may be used by businesses such as Major League Baseball to obstruct people’s access to their establishments.

Major League Baseball is not the only big business seeking to thwart the will of the people in Georgia’s politics.

“For two weeks, Delta Air Lines and Coca-Cola had been under pressure from activists and Black executives who wanted the companies to publicly oppose a new law in Georgia that makes it harder for people to vote,” the New York Times noted. “On Wednesday, six days after the law was passed, both companies stated their ‘crystal clear’ opposition to it.”

A survey of 1,000 likely voters conducted by Rasmussen research published on March 17 shows that 75% of likely voters support the requirement of photo identification before being permitted to vote in U.S. elections. That includes 69% of Black voters — statistically similar to Other Non-White voters and White voters.

“A new Rasmussen Reports national telephone and online survey finds that 75% of Likely U.S. Voters believe voters should be required to show photo identification such as a driver’s license before being allowed to vote,” the poll states. “Only 21% are opposed to such a requirement.”

“Thirty-six states have enacted some form of voter ID law, but those laws would be nullified if the Senate approves H.R. 1, which passed the House on a party-line vote,” Rasmussen notes. “Critics say H.R. 1 ‘would force states to allow anyone to vote who simply signs a form saying that they are who they claim they are’.”

“Support for voter ID laws has actually increased since 2018, when 67% said voters should be required to show photo identification such as a driver’s license before being allowed to vote,” the report constnued. “Eighty-nine percent (89%) of Republicans support voter ID requirements, as do 60% of Democrats and 77% of voters not affiliated with either major party.”