The 45th President Donald Trump was subjected to accusations of treason for over four years and throughout his entire presidency. His administration was undermined by the multi-million dollar, yearslong Mueller investigation, which ultimately failed to corroborate any evidence that he had colluded with the Russians to rig the 2020 election.

It was Hillary all along, new testimony in the Durham-Sussman trial officially confirms, thus bringing to an end the rampant mass media denial that Hillary Clinton was the mastermind behind the Russia hoax that it had worked so fervently to push.

“This is one of the greatest political scandals in history,” Trump told Fox News on Saturday morning. “For three years, I had to fight her off, and fight those crooked people off, and you’ll never get your reputation fully back.”

“Where do I get my reputation back?” Trump asked.

“Trump said that the law enforcement and intelligence community resources devoted to investigating him and members of his 2016 campaign distracted officials from what ‘could have been a real danger with Russia’,” Fox News reported.

Former Clinton campaign manager Robby Mook was asked at the Durham trial on Friday about the Clinton campaign’s understanding of the Alfa Bank allegations against Trump and whether they planned to leak the information to the media.

Mook testified he was first briefed about the Alfa Bank issue by the Clinton campaign’s general counsel Marc Elias, who was also a partner at law firm Perkins Coie.

“I discussed it with Hillary as well,” Mook testified.

“I don’t remember the substance of the conversation, but notionally, the discussion was, hey, we have this and we want to share it with a reporter,” Mook said.

Ultimately, Mook said that Hillary Clinton approved of leaking the Russia hoax accusation to the press.

When pressed about the details, Mook testified, “All I remember is that she agreed with the decision.”

Independent journalist Glenn Greenwald unloaded a lengthy thread that contextualizes the ramifications of the Durham trial revelation and what it means for Donald Trump and the U.S. media.

“Good morning. The Clinton campaign fabricated a completely false story about Trump having a secret server with a Russian bank,” Greenwald tweeted. “The 2 servile partisan ‘reporters’ who most pushed it — @FranklinFoer and @NatashaBertrand — have been repeatedly promoted.”

Good morning. The Clinton campaign fabricated a completely false story about Trump having a secret server with a Russian bank. The 2 servile partisan "reporters" who most pushed it — @FranklinFoer and @NatashaBertrand — have been repeatedly promoted.https://t.co/lUlbHEOGPw

“This has long been known but the proof is emerging now because Hillary’s lawyer is on trial for lying to FBI – ie, they not only planted this disinformation with the press but also with FBI,” he went on. “Hillary’s campaign manager, Robby Mook, says Hillary personally approved the press leak. To see who the real liars are – who the actual disinformation agents are – watch @chrislhayes nod his DNC head as the two lying reporters who spread the story and got rewarded — Bertrand and Foer — pronounce that this Trump/Alfa fraud has been proven”:

To see who the real liars are – who the actual disinformation agents are – watch @chrislhayes nod his DNC head as the two lying reporters who spread the story and got rewarded — Bertrand and Foer — pronounce that this Trump/Alfa fraud has been proven:https://t.co/0ySoHm7kpB

“Hillary’s campaign not only used the media and FBI to spread this lie (FBI investigated and quickly determined it was bullshit), but Hillary herself used Twitter to spread this disinformation in a viral tweet which (of course) remains up with no label”:

Look at these 3 lying DNC disinformation agents masquerading as journalists, all smirking as they deliberately pronounce an absolute lie invented by the Clinton campaign is “very, very obviously” true.

“These same people, of course, endorsed the CIA lie about the Biden laptop”: 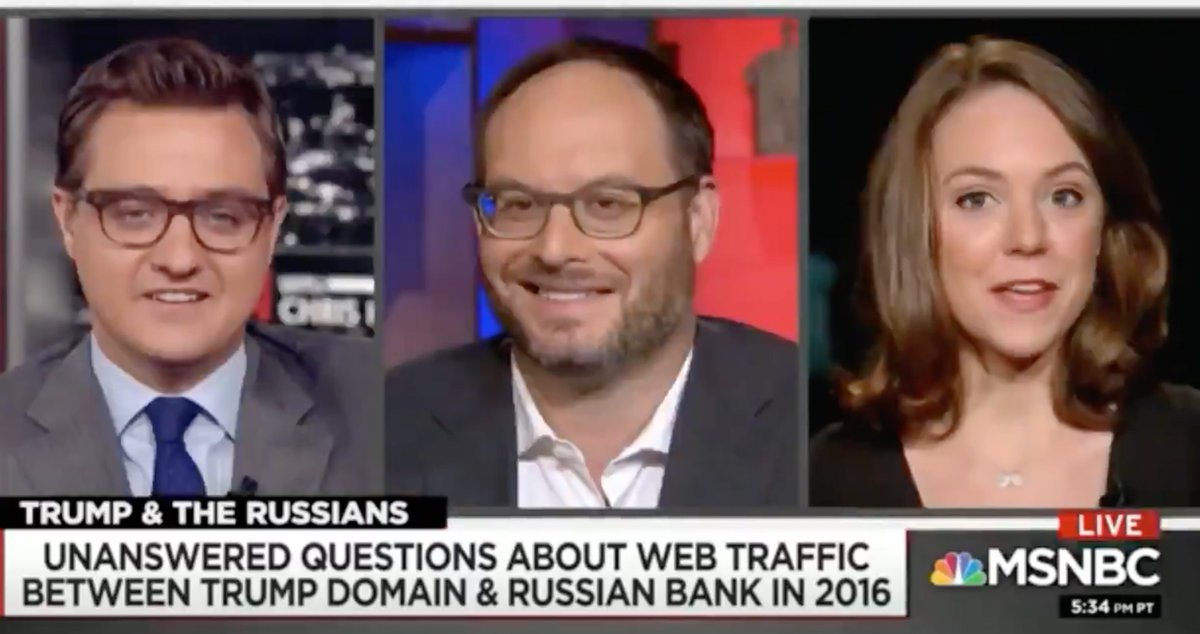 “Since 2016, nobody has been more rewarded for eagerly serving as a vector of CIA/DNC disinformation than Bertrand,” Greenwald continued. “She started at @BusinessInsider (where she pushed Alfa Bank), then promoted to @MSNBC, then to @TheAtlantic, then @politico, now at @CNN.”

“Lying is their currency,” he added.

So, where does Donald Trump go to “get his reputation back” after all of the Russia collusion lies? It would start with holding the “journalists” accountable who worked with the Clinton campaign to push the Russia hoax to begin with.