Donald Trump has begun to make waves again. Trump made a surprise appearance to well-wishers on President’s Day weekend, was reported to be thinking about influencing the California governor recall election, and even hinted about possibly running for president in 2024.

It’s been a political re-emergence that must be unnerving to Democrats and liberal media who though their arch-nemesis had been vanquished. Indeed, the Senate impeachment show trial of now-citizen Donald Trump was explicitly designed to prevent him from running for the White House ever again.

But now that Trump has been acquitted of their impeachment charge, Democrats can do nothing to stop him from running. So, the House Democrats are turning to petty, tributary, and symbolic dirty tricks, such as proposing that “twice-impeached” presidents cannot be memorialized or even buried at Arlington National Cemetery.

American leftists are now so vicious they not only want to savage those who dare to oppose them in life, but they also want to desecrate their memories after death.

When conservative radio talk legend Rush Limbaugh passed away this week at age 70 after a courageous fight against lung cancer, Florida governor Ron DeSantis joined in with other patriotic Americans like Donald Trump to pay the man a fitting tribute. One of DeSantis’s actions was to lower the flags to half-staff in honor of Rush’s memory, which instantly drew a vociferous backlash from DeSantis’s many detractors.

Joining the governor in honoring Rush Limbaugh was Donald Trump, who gave a whirlwind media tour to share his thoughts and give his condolences. The former president appeared on Fox News’s daytime air, the primetime show “Hannity,” in addition to the OANN network and Newsmax.

One of Trump’s interviews he gave to honor Rush Limbaugh has been targeted for Big Tech censorship: Newsmax. Youtube, which is owned by Google, has taken it down. 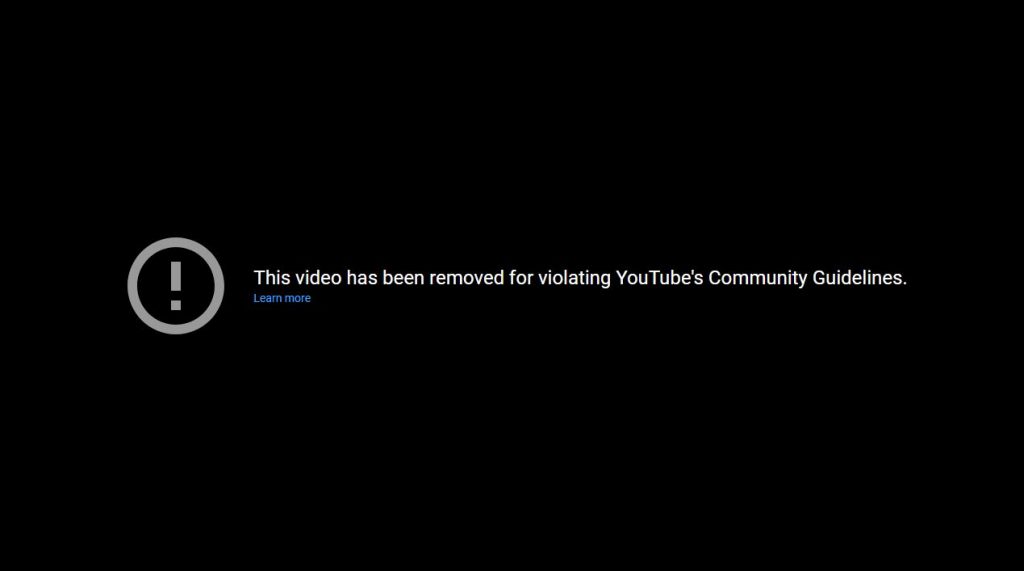 Twitter, for its part, has left a video of the interview up, which you can watch below — for now.

2024?: Donald Trump on whether he will run for president again, "I won't say yet, bet we have tremendous support." @GregKellyUSA https://t.co/VlT7z8drtO pic.twitter.com/pZUxftFBR5

Newsmax reacted to the Youtube censorship, telling The Epoch Times that the interview was removed because it “violated YouTube’s community guidelines.”

“In accordance with our presidential election integrity policy, we removed this video from the Newsmax TV channel,” the spokesperson added. It is a “policy” that is enforced almost exclusively against the Democrats’ opponents, which raises questions about whether such actions constitute election interference.

Florida Governor Ron DeSantis has raised such questions, most recently on the same day he lowered flags to half-staff to memorialize Rush Limbaugh. As Liz Peek noted in an editorial:

DeSantis is proposing legislation that asks the Florida state legislature to impose stiff fines – up to $100,000 per day – on tech companies that “deplatform” political candidates running for office in his state. Candidates like, for instance, Donald Trump.

It would be a modest proposal in the spirit of Poland’s recent move to slap a fine of $13 million per instance of a censored social media post. But it is clear now the U.S. political system needs to protect itself from Big Tech manipulation of civil political discussion.

This may be one reason that such corporate giants would fear the political resurgence of Donald Trump: The gloves would come off if he returned to the White House or if he backed a potential ally, such as Ron DeSantis, in a successful presidential run.

Social media platforms where Trump could even turn to get out his message have seen major attacks. Big Tech giants are benefiting from them. Not only was Parler hacked and singled out by Amazon to be de-servered, but Gab on Friday suffered an outage due to hacks (albeit the motives for the hacks are not entirely clear). Parler is now back and operational, although with occasional technical issues.

Americans will have to develop alternative social media platforms that can withstand the coordinated actions of radicals to deny their enemies an online harbor for their views. If Trump supporters and conservatives continue to be denied a harbor to openly share their constitutionally protected free speech, then it bodes ill for the nation’s ability to maintain a balanced and peaceable civil society.

Donald Trump had been fairly quiet in post-presidency, but it appears that is about to change. Although he has returned to public life as a private citizen, Big Tech censorship against him continues.

NOW READ: Donald Trump Reacts to the Death of Talk Radio Legend Rush Limbaugh: ‘He Was a Fighter’