Donald Trump Has One Question for Pelosi That She Will Refuse to Answer on Her Jan. 6 Committee

Speaker Nancy Pelosi announced the resurrection of her January 6 witch hunt in the form of a partisan committee, already having failed at the Senate impeachment trial to prove Donald Trump ‘incited’ rioters at the Capitol.

Liz Cheney will be the lone Republican on Nancy Pelosi’s committee. The Wyoming Republican joined the ranks of anti-Trump Democrats by agreeing to be part of Pelosi’s star chamber.

“Former President Donald Trump’s top GOP nemesis Liz Cheney will serve on a committee created by House Democrats to investigate the Jan. 6 riot at the Capitol,” the Washington Examiner reported.

“Speaker Nancy Pelosi, a California Democrat, announced the makeup of the panel a day after the House voted mostly along party lines to create the special committee,” the report noted.

Speaker Pelosi’s committee appoints 13 members to report on the “facts, circumstances, and causes relating to the January 6, 2021, domestic terrorist attack upon the United States Capitol Complex.”

That allegedly includes the “facts and causes relating to the preparedness and response of the United States Capitol Police and other Federal, State, and local law enforcement agencies in the National Capital Region and other instrumentalities of government, as well as the influencing factors that fomented such an attack on American representative democracy while engaged in a constitutional process.”

However, there is one place that Speaker Pelosi will assuredly refuse to go. Donald Trump brought that up in one of his shortest press releases to date. It includes just one question. 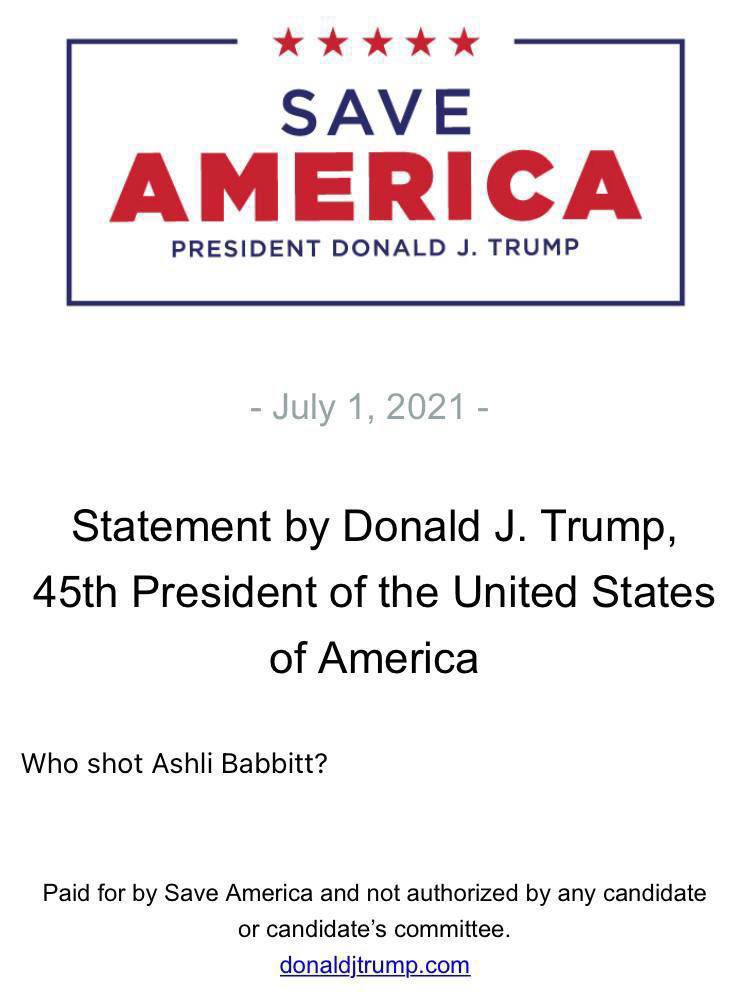 In April, federal prosecutors dropped the Ashli Babbitt case, as well as any potential charges against an unidentifed Capitol Police officer who shot the Trump supporter as she attempted to crawl through a window in the Capitol building on January 6.

“Federal prosecutors will not charge a police officer who shot and killed a woman as she climbed through the broken part of a door during the insurrection at the U.S. Capitol on Jan. 6,” the AP reported.

“Authorities had considered for months whether criminal charges were appropriate for the Capitol Police officer who fatally shot Ashli Babbitt, a 35-year-old Air Force veteran from San Diego,” the report continued. “The Justice Department’s decision, though expected, officially closes out the investigation.”

“Prosecutors said they had reviewed video of the shooting, along with statements from the officer involved and other officers and witnesses, examined physical evidence from the scene and reviewed the autopsy results,” the report added.

Ashli Babbitt’s death was determined to be a ‘homicide,’ according to the Chief Medical Examiner in the nation’s capitol. It is a designation for when one person is killed by another person or persons.

Ashli Babbitt was captured on video being shot by the unnamed Capitol Police officer on January 6th.

The New York Times reported more information about the unidentified shooter in January, who had not been charged for excessive force or for negligence after shooting the unarmed woman.

The ideo shows the unnamed capitol officer holding aloft .40-caliber Glock handgun and pointing it at Babbitt, while Sullivan shouts repeatedly that “there is a gun.”

The unidentified police officer is reportedly still in hiding due to alleged threats made against his life.

Babbitt family attorney Terry Roberts taked to Newsmax about the controversial elements of the case.

Roberts said the “clearly, the officer a required willfullness … he could clearly see that she was not armed,” and thus the shooting was not justified, contending that the officer did not give Babbitt warning despite ample time to do so.

“This is a situation in which the officer could have easily arrested her if he had grounds to arrest her without using deadly force,” Roberts said. “This was an egregious act of excessive force.”

Furthermore, there were several officers behind Babbitt who merely watched and did not intervene, despite knowing that she was in mortal danger.

The circumstances surrounding Babbitt’s death remain mysterious, as does the identity of the officer who shot her. It appears that it will remain that way, at least if Speaker Pelosi’s Jan. 6 committee has anything to say about it.