Donald Trump, 45th President of the United States, has just issued a statement on the killing of at least 12 U.S. servicemembers in multiple explosions in Kabul, Afghanistan. 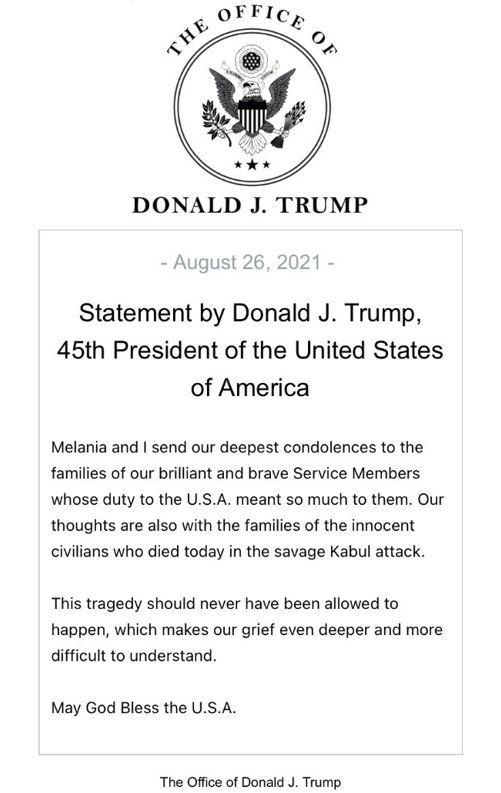 “Melania and I send our deepest condolences to the families of our brilliant and brace Service Members whose duty to the U.S.A. meant so much to them,” Donald Trump said. “Our thoughts are also with the families of the innocent civilians who died today in the savage Kabul attack.”

“This tragedy should never have been allowed to happen, which makes our grief even deeper and more difficult to understand,” Trump continued.

Meanwhile, President Biden has issued no remarks on the unacceptable killing of a dozen U.S. troops due to his disastrous decisions.

BREAKING: Former President Trump has issued a statement on the attacks in Kabul before Joe Biden. pic.twitter.com/ox2EzQ4RDL

The news comes as President Biden has remained silent and hidden away from the American people. He is slated to address the American people at 5 p.m. White House Press Secretary Jen Psaki will be late by nearly six hours to her press conference when she presumably address Americans at 5:45 p.m.

President Joe Biden had earlier canceled a big meeting with Afghan governors set for 3 p.m. If this were Donald Trump’s watch, it is inconceivable that the situation would have occurred to begin with, let alone a further dereliction of duty stemming from cowardice to face the American people.