Donald Trump Packs Phoenix Rally, But Look Behind the Scenes at Biden’s ‘Town Hall’ to See Who Can Draw a Bigger Crowd

Donald Trump has packed an auditorium at a “Rally to Protect Our Elections” event in Phoenix, Arizona on Saturday. There was an estimated 4,000 members in attendance at the rally.

Trump is expected to speak sometime in the 6 p.m. hour. Watch the event below

But Joe Biden’s “town hall” with CNN, sold as a highly anticipated event, fell far short of even one of Trump’s speeches at an event. 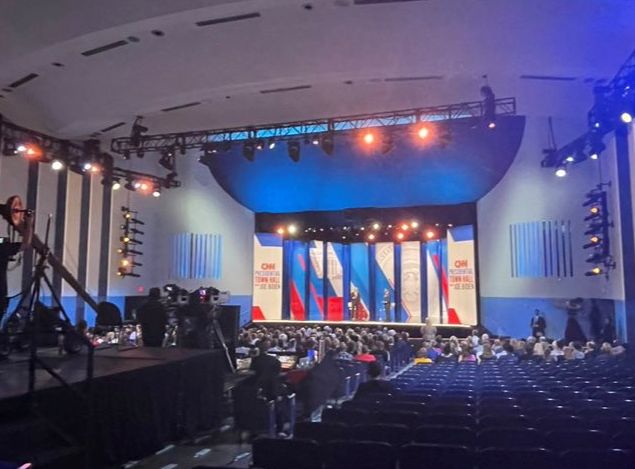 The photo comparison was shown by Newsmax’s Benny Johnson:

Which is the crowd for the sitting President of The United States? pic.twitter.com/6acRpoOeD1

“Which is the crowd for the sitting President of The United States?” Johnson asked.

On Saturday, Joe Biden attended a fundraiser for Terry McCauliffe, who is again running for Virginia governor. Biden was heckled at the event. While the crowd sounded noisy, there was only about 500 in attendance.

“About an hour before Biden took the stage, some 500 people were seen attending the event, with the venue roughly half empty,” Fox News reported. “However, later in the hour, a White House official said nearly 3,000 people were in attendance there. On YouTube, fewer than 500 people were watching on the main channel streaming the event channel at any given time.”

“Earlier this week at a CNN town hall event, Biden was criticized for speaking to a half-empty room,” the report added.

When Biden isn’t protected by friendly news outlets like CNN, it becomes obvious that he does not have the support that the media lets on. Meanwhile, Donald Trump has a loyal and rabid audience that is not going anywhere. There is even talk that Donald Trump is considering a run for the presidency again in 2024.

Joe Biden Was in the Middle of a Confusing Rant, When He’s Suddenly Interrupted by a Heckler