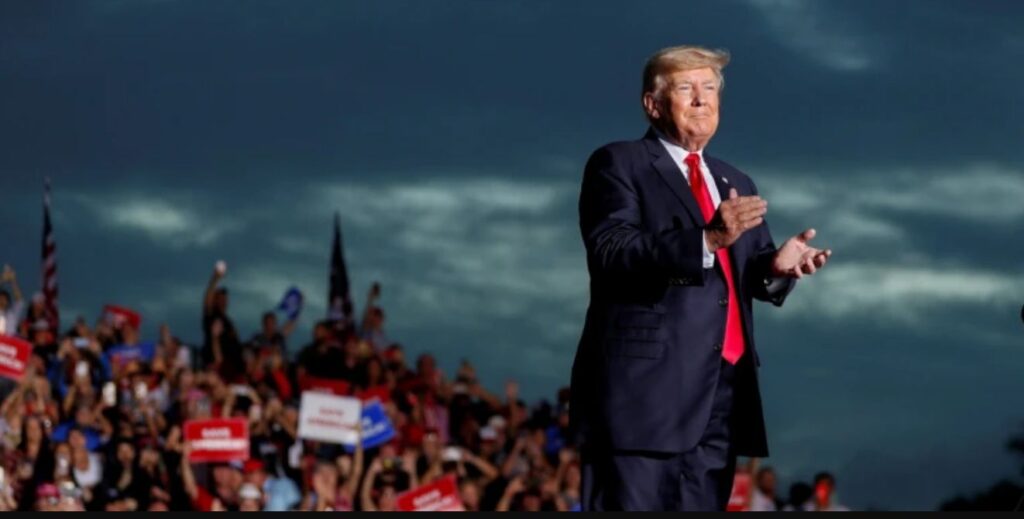 Donald Trump has reacted to the “huge findings” that have come out of the Arizona election audit. 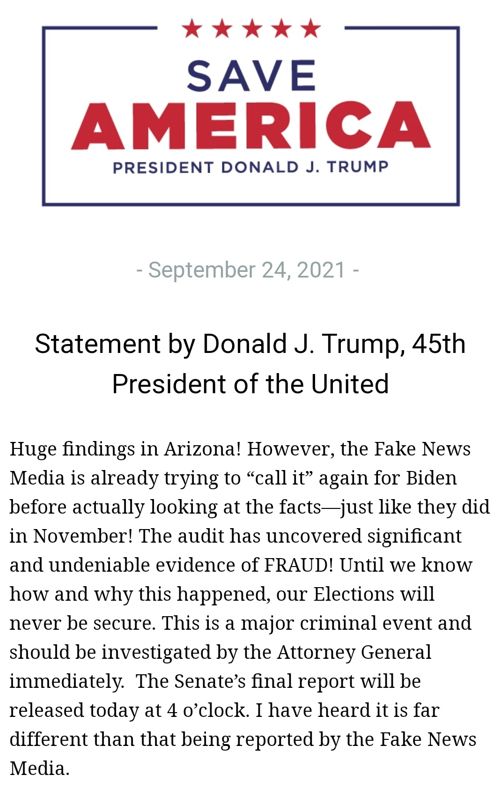 “Huge findings in Arizona!” Trump writes. “However, the Fake News Media is already trying to ‘call it’ again for Biden before actually looking at the facts – just like they did in November!”

“The audit has uncovered significant and undeniable evidence of FRAUD!” he went on. “Until we know how and why this happened, our Elections will never be secure. This is a major criminal event and should be investigated by the Attorney General immediately.”

“The Senate’s final report will be released today at 4 o’clock,” he added. “I have heard it is far different than that being reported by the Fake News Media.” 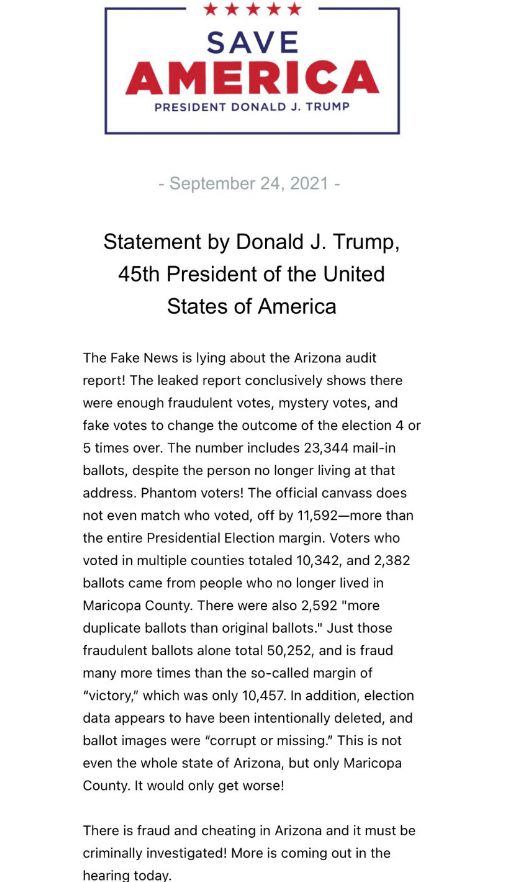 As earlier reported, draft reports from the independent auditing agency Cyber Ninjas were leaked to the press. The drafts were described as being close to ‘final’ and were confirmed to be authentic by KJZZ:

The leak comes less than 24 hours before a scheduled presentation in the Arizona Senate, where President Karen Fann and Sen. Warren Petersen, the Republicans who issued subpoenas that obtained the ballots and voting materials needed for the investigation, are giving the contractors they hired to conduct the review a platform to explain their findings.

The Cyber Ninjas’ draft reports are provided below. They can be downloaded and read or scrolled through below. First, the Executive Summary:

Then the Methodology and Operations:

And finally, there are the Results Details:

The media reports on the topline finding are preoccupied by the Executive Summary’s preliminary findings that Joe Biden was found according to hand recount to have more votes than Donald Trump.

As an Arizona Republic report summarized:

The draft report shows there was less than a 1,000-vote difference between the county’s certified ballot count and the Cyber Ninjas’ hand count.

The draft audit report says, however, the election results are inconclusive.

However, there are major questions being raised by Cyber Ninjas about the legitimacy of those votes cast, and even a referral for an investigation to the state’s attorney general, as the report noted:

The official results are set to be presented to the Senate at 1 p.m. Friday. Several versions of the draft report, titled “Maricopa County Forensic Audit” by Cyber Ninjas, circulated prematurely on Wednesday and Thursday. Multiple versions were obtained by The Arizona Republic.

The Cyber Ninjas and their subcontractors were paid millions to research and write the report by nonprofits set up by prominent figures in the “Stop the Steal” movement and allies of Donald Trump, but Cyber Ninjas CEO Doug Logan said that would not influence their work.

The draft reports reviewed by The Republic minimize the ballot counts and election results and instead focus on issues that raise questions about the election process and voter integrity.

Donald Trump’s strategic adviser Boris Epshteyn focused on what he argued were examples that ballots cast were invalid:

To all those trying to spin the Arizona Audit, spin this:

The number of illegal ballots found in Maricopa County alone is over 4 times the current amount separating President Trump and Joe Biden in Arizona as a whole.

Maricopa County has dismissed such concerns in the past, just as the county’s election officials are now. Randy Pullen, a spokesman for the election review, also confirmed the validity of the draft reports to KJZZ:

“What has been found is both encouraging and alarming. On the positive side there were no substantial differences between the hand count of the ballots provided and the official canvass results for the county,” the draft stated.

“However, the draft report raises concerns about the county’s elections systems and record-keeping, and accuses Maricopa County officials of stonewalling their effort to perform ‘a complete audit’,” the report notes.

“Had Maricopa County chosen to cooperate with the audit, the majority of these obstacles would have easily been overcome,” the report states.

Meanwhile, Maricopa County has refused to turn over servers connected to the election, as well as the master administrative key used by Dominion Voting Systems in the 2020 election.

There will be more to come on the Arizona election audit at the major press conference today.