Donald Trump is not-so-subtly threatening to run as an Independent in the 2024 presidential campaign if he is not nominated by the Republican Party. Such a bold move would send shockwaves throughout American politics and might prove to be the demise of the GOP.

The 45th President signaled his openness to the idea in a recent Truth Social post that referenced a linked story called “The Coming Split.” 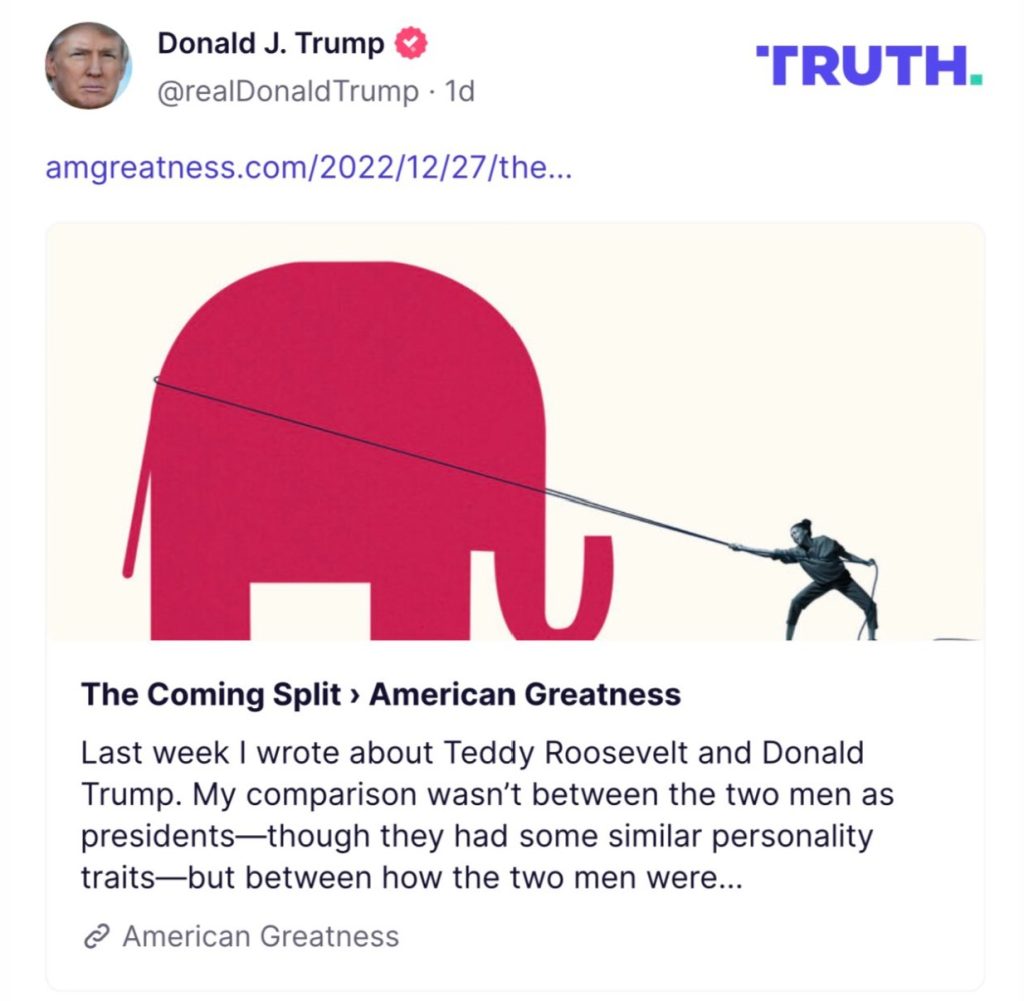 The former president posted the link on Truth Social “as is” — suggesting that the story itself was his comment.

The American Greatness story recounts the 1912 election, when the right split its votes between incumbent president Theodore Roosevelt (who ultimately ran “Bull Moose”) and William Howard Taft. The political division threw the election to the “progressive” Woodrow Wilson, who subsequently passed the Federal Reserve Act, the Federal Income Tax, direct election of U.S. Senators, the Espionage and Sedition Acts, and intervened into World War I, to name just a few ways that the president altered the course of U.S. history (and for the worst).

Thus, it is with utmost attention that Americans should heed Donald Trump’s warning, which comes in the form of the American Greatness opinion piece. Here are a few key lines from the article.

But, despite the obvious differences, we’re heading for a 1912-repeat, in which the Republican Party ignores its own voters. The Republican machine has no intention of letting us choose Trump again: He is not a uniparty team player. They’d rather lose an election to the Democrats, their brothers in crime, than win with Trump.

The article  raises the thorny issue of Florida Governor Ron DeSantis and what role he might play in the 2024 presidential election.

That leads us to the inevitable question: What should we do when a majority of Republicans want Trump, but the Republican Party says we can’t have him? Do we knuckle under and vote for Ron DeSantis because he would be vastly better than any Democrat?

I say no, we don’t knuckle under. And I like DeSantis. I’d vote for him after Trump’s second term. But not before.

This echoes a sentiment that I have heard from numerous Trump supporters: It’s not Ron DeSantis’s turn. These die-hards do not believe that the nation can properly move forward until justice is done to Donald Trump by fixing the arguably “rigged” 2020 election.

The author, Dan Gelernter, taps the sentiment of many who are frustrated with the lack of accountability in Washington D.C.. These are voters willing to “blow things up”with the aim of disrupting the status quo.

If you ask me, Trump’s presidency was much more “American” than it was “Republican.” That’s why it was such a success and why so many of us loved it. Now, if the Republican Party thinks it’s not big enough for Trump, it’s not going to be big enough for me either.

Do I think Trump can win as a third-party candidate? No. Would I vote for him as a third-party candidate? Yes. Because I’m not interested in propping up this corrupt gravy-train any longer. Mitch McConnell says that “providing assistance for Ukrainians to defeat the Russians is the number one priority for the United States right now, according to most Republicans.” Most Republicans where? Inside his bank account?

Much like the current House Speaker battle, ironically a rebellion against the Trump-endorsed Rep. Kevin McCarthy, many conservatives are no longer willing to go along with the two-party dance all the way to the American grave. They are aching for disruption — and that’s why Donald Trump is their man. Even if that means blowing up a Republican Party that refuses to listen to its voters.