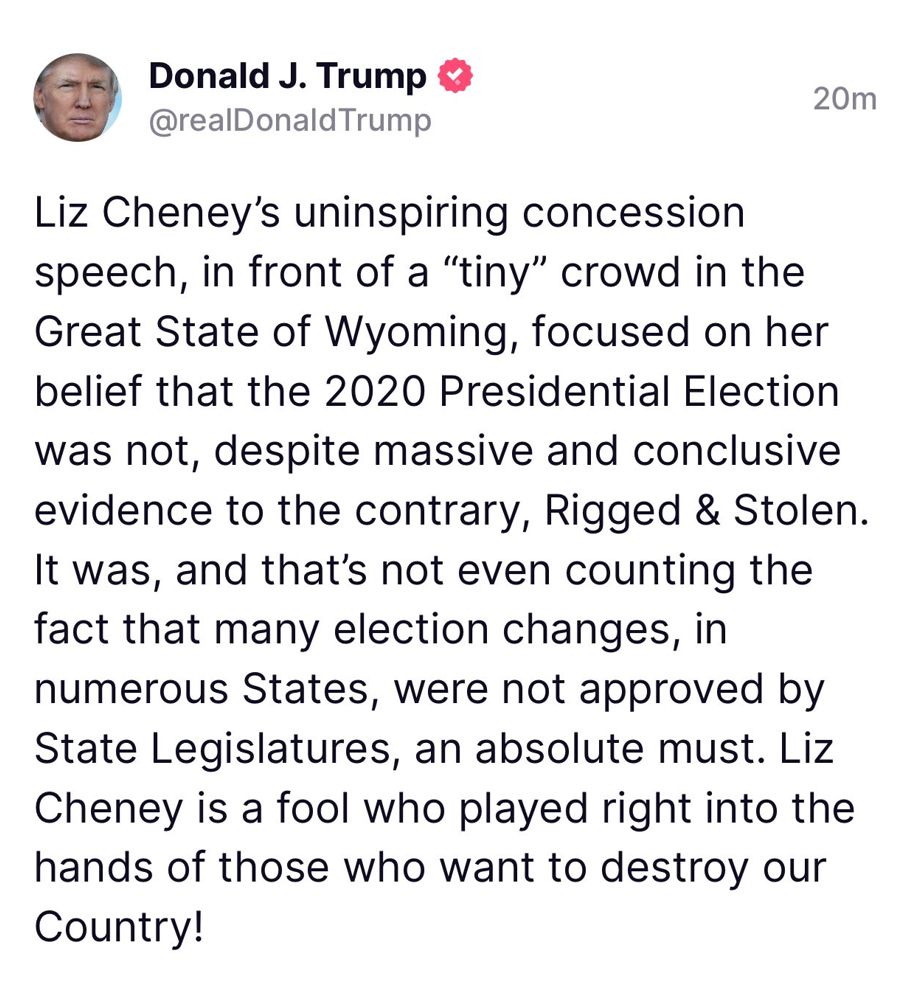 “Congratulations to Harriet Hageman on her great and very decisive WIN in Wyoming,” Trump wrote. “This is a wonderful result for America, and a complete rebuke of the Unselect Committee of political Hacks and Thugs.”

“Liz Cheney should be ashamed of herself, the way she acted, and her spiteful, sanctimonious words and actions towards others,” Trump went on. “Now she can finally disappear into the depths of political oblivion where, I am sure, she will be much happier than she is right now. Thank you WYOMING!”

Liz Cheney was in complete denial on the Wednesday morning following her 37-point shellacking. She shared her delusional thoughts with “Today” on potentially running for president to ‘stop Trump.’ Watch:

“The former president said last night, you’re now headed to political oblivion,” host Savannah Guthrie noted. “You said this fight is just beginning, you’ve even launched a political organization already. So let’s just be straight about it. Are you considering running for president yourself?”

“Well, what I’m going to do, Savannah, is spend the next several months completing my work in Congress, obviously completing my work, representing the people of Wyoming,” Cheney responded. “We have a tremendous amount of work left to do on the January 6th committee.”

“Also, though, I’m going to be making sure that people all around this country understand the stakes of what we’re facing, understand the extent to which we’ve now got one major political party, my party, which has really become a cult of personality,” she claimed. “And we’ve got to get this party back to a place where we’re embracing the values and the principles on which it was founded. And, talking about, you know, fundamental issues of civics, fundamental issues of what does it mean to be a constitutional Republic.”

“But Congresswoman, you didn’t answer me yes or no,” Guthrie noted.

“I will be doing whatever it takes  to keep Donald Trump out of the Oval Office,’ Cheney replied.

Meanwhile, the People of Wyoming will soon be forging ahead with Trump-endorsed candidate Harriet Hageman.

"Wyoming has spoken on behalf of everyone who understands that our government is a government of, by, and for The People!"
— Harriet Hageman @HagemanforWY #Elections2022 #TrumpEffect pic.twitter.com/aTLbZ2gAyC

Liz Cheney’s defeat means all but two Republicans who voted for Trump’s impeachment will soon be out of Congress.

8 out of 10 House Republicans, who voted to impeach President Trump, won’t return to Congress: