Dr. Anthony Fauci gave a warning to Americans on NBC’s ‘Meet the Press’ on Sunday: The Covid pandemic is not ‘over.’

“Is this country ready for another pandemic? And are we still in the one we have not — that we’ve been talking about?” Todd asked.

“Well, we certainly are still in it,” Fauci replied. “I think you just need to look at the numbers. We’re still having between 300 and 400 deaths per day. So I think the idea that, ‘Forget it, this is over,’ it isn’t.”

“We’re going into the winter right now,” Fauci continued. “We have the wherewithal to mitigate against another surge. It’s up to us to make sure that doesn’t happen. And that’s the thing that’s very frustrating, Chuck, among public health officials, including myself. We have an updated vaccine booster that we want to do, but the uptake of that is, you know, less than 15%. It’s somewhere between 11% and 15%. We’ve got to do better than that.”

Dr. Fauci is thus insisting that the United States is in a Covid “pandemic,” even as case rates have stabilized. Most established definitions of “pandemic” would concur that such a case pattern is an “endemic” stage. 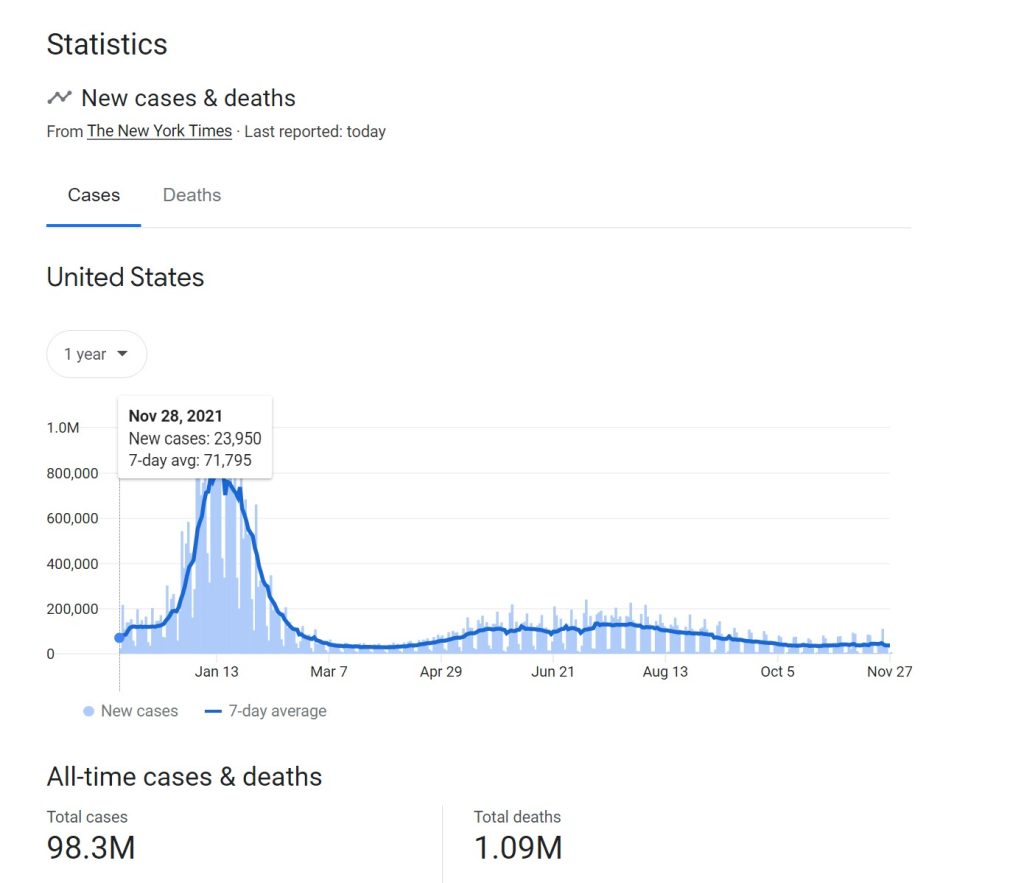 Seroprevalence data show that nearly every American in the United States has been exposed to SARS-CoV-2, regardless of vaccination status or if they’ve worn a mask.

“According to a Centers for Disease Control and Prevention survey of blood donor samples, conducted in December and updated last month, an estimated 95% of Americans ages 16 and older have developed identifiable Covid antibodies,” CNBC reported in March. “Those come from both vaccinations — roughly 77% of the U.S. population has received at least one Covid vaccine dose, according to the CDC — and prior Covid infections.”

Johns Hopkins University found in its landmark study published in January that 99% of unvaccinated people who had Covid infections gained robust “natural immunity” that did not diminish for at least 650 days.

While Covid-related mortality in the U.S. is being reported at nearly 300 people a day, there are developments that throw into question either the Covid mortality reporting, the vaccine efficacy, or both.

“For the first time, a majority of Americans dying from the coronavirus received at least the primary series of the vaccine,” the Washington Post reported.

“Fifty-eight percent of coronavirus deaths in August were people who were vaccinated or boosted, according to an analysis conducted for The Health 202 by Cynthia Cox, vice president at the Kaiser Family Foundation,” the story continued.

Furthermore, the article acknowledged that a significant number of the “vaccinated” were Covid-related deaths going back to September 2021.

“It’s a continuation of a troubling trend that has emerged over the past year,” the Post analysis continued. “As vaccination rates have increased and new variants appeared, the share of deaths of people who were vaccinated has been steadily rising. In September 2021, vaccinated people made up just 23 percent of coronavirus fatalities. In January and February this year, it was up to 42 percent, per our colleagues Fenit Nirappil and Dan Keating.”

In September, President Joe Biden had surprised many inside The White House by saying on “60 Minutes” that the pandemic is “over.”

“Is the pandemic over?” CBS’ Scott Pelley asked.

“The pandemic is over,” Biden said. “We still have a problem with COVID. We’re still doing a lot of work on it. But the pandemic is over. If you notice, no one’s wearing mask, everybody seems to be in pretty good shape. And so I think it’s changing and I think this is a perfect example.”

According to a report by Politico, multiple White House Covid advisers were taken by “surprise.”

Biden’s insistence on Sunday night that the pandemic is over caught several of his own health officials by surprise. The declaration was not part of his planned remarks ahead of the “60 Minutes” interview, two administration officials familiar with the matter told POLITICO.

It is obvious that the now-departing top Covid doc, Dr. Anthony Fauci, was certainly one of those “health officials.”