Dr. Fauci is Under Fire Again for ‘Dumbass’ Advice He Gave to Biden on Omicron Variant 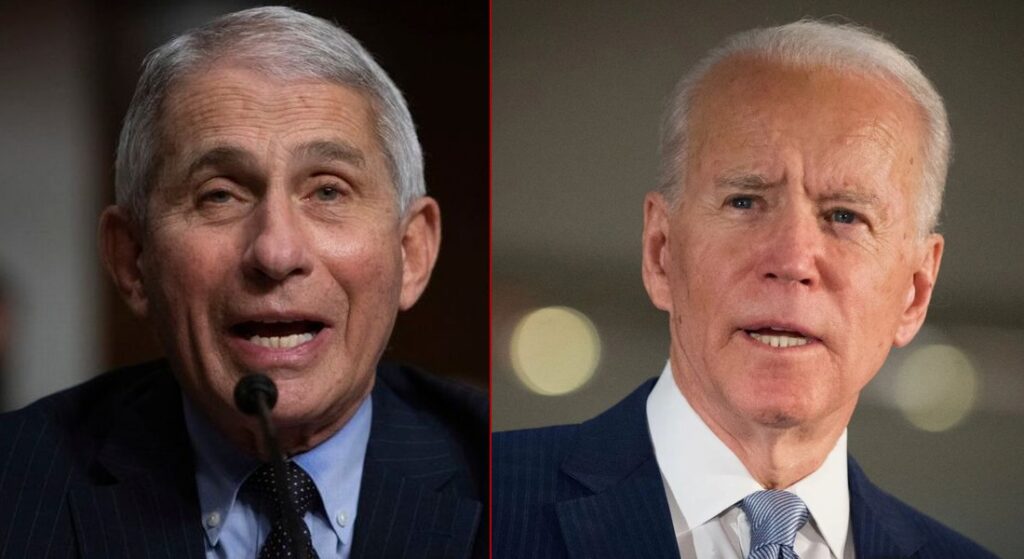 Dr. Fauci is the world record holder for stupid advice on Covid that either makes zero sense or is proven wrong within months, sometimes weeks, occasionally days, and on rare occasion, hours.

The latest head-slapper is Biden’s backstory on his racist, xenophobic, perfectly acceptable travel ban on South Africa and seven other African countries.

Biden claims Dr. Fauci told him not to implement such a travel ban right after news first broke on a new Xi Omicron variant detected in Botswana and then in South Africa.

“President Biden said Friday that he delayed implementation of a new ban on travel from southern Africa on the advice of his medical advisers, who are led by Dr. Anthony Fauci,” the NY Post reported.

A reporter asked Biden why the emergency precaution was being delayed until Monday, rather than immediately if Omicron posed a threat to public safety.

“Why not do it now like other countries have done?” Biden was asked in Nantucket.

“Because that was the recommendation coming from my medical team,”he replied. Dr. Fauci, who is Biden’s chief medical adviser, gave the president a half-hour briefing on the variant on Friday.

“We don’t know a lot about the variant except that it is of great concern and it seems to spread rapidly — and I spent about a half hour this morning with my COVID team led by Dr. Fauci and that was the decision we made,” Biden added.

Of course, this isn’t the first time that both Dr. Fauci and Joe Biden have been wrong about travel restrictions from nations posing a Covid threat – even as the future president called his predecessor “xenophobic” for such a ban.

Stop the xenophobic fear-mongering. Be honest. Take responsibility. Do your job. https://t.co/nQ5aLVrpyb

We are in the midst of a crisis with the coronavirus. We need to lead the way with science — not Donald Trump’s record of hysteria, xenophobia, and fear-mongering. He is the worst possible person to lead our country through a global health emergency.

Biden also mocked Trump on building a wall to stop potential Covid-contagious immigrants from coming across the southern border, while stating that ‘banning all travel from Europe – or any other part of the world – will not stop it.”

A wall will not stop the coronavirus.

Banning all travel from Europe — or any other part of the world — will not stop it.

This disease could impact every nation and any person on the planet — and we need a plan to combat it.

Remember when Trump temporarily banned travel to and from China and “Trump racist” trended on Twitter for a week? Well now Biden just did the exact same thing in Africa and everyone wants to talk about Seth Rogan.

It’s easy to see who’s right if you pay attention.

Ironically, Biden also condemned Donald Trump’s “Africa ban,” which happened to be about a different national security matter, and not Covid.

This was Biden on what he called the "African Ban" last year. Now he's imposed one himself. https://t.co/HYLrRaBpWO

Dr. Fauci had opposed a travel ban on China when Donald Trump was president, but has had a change of heart on the policy under the Biden presidency.

“That would create a lot of disruption economically and otherwise and it wouldn’t necessarily have a positive effect,” Fauci said about Trump’s proposed China travel ban at their Jan. 24 meeting.

As is common with Dr. Fauci, he has again changed his tune, while giving Biden the inexplicable advice to wait to impose the travel ban on South Africa and seven other African nations.

“There is always the possibility of doing what the UK has done, namely block travel from South Africa and related countries,” Fauci said in a Friday interview on CNN.

“That’s certainly something you think about and get prepared to do. You’re prepared to do everything you need to protect the American public. But you want to make sure there’s a basis for doing that,” he added.

“Obviously as soon as we find out more information we’ll make a decision as quickly as we possibly can.”

Even if Fauci means by ‘as quickly as we possibly can’ is after one of the busiest travel weekends of the entire year. Unsurprisingly, Fauci now thinks that Omicron is already in the U.S.

Such incompetence on the part of ‘experts’ is one reason why the Covid pandemic continues to go on and on without end. Here is what Dr. Fauci earlier predicted, which seems like a pipe dream because of the never-ending ‘variants.’

“If all things go the way we want them to go … and we get really the overwhelming majority of the people vaccinated, I think as we get into the fall and the winter, we could start to really get some good control over this as we get into 2022,” Fauci said during an Aug. 23 interview with NPR.

Throw that into the dustbin of history, along with the Omicron variant and all of Fauci’s other wrong predictions. Meanwhile, a Fauci-disciple in New York is showing America what incomprehensible Covid policy looks like.

New Governor Kathy Hochul is declaring a “state of emergency” over the Omicron variant that would give her unwarranted authoritarian powers, despite the fact there are exactly zero such cases in New York. This follows upon New York City essentially pretending to be Florida for a day and suspending the worthless mask, vaccine passports, and social distancing policies for the Macy’s Thanksgiving Day parade. (Florida, incidentally, still has the lowest Covid rates in the country despite being free.)

President Biden, for his part, doesn’t even seem to know what is in his own Africa travel ban.

“Biden seemed to have a poor grasp on the travel rules,” the Post reported. “He misstated the number of countries impacted and said the policy would bar people traveling ‘to and from’ the region, despite official releases only noting restrictions on travel from — but not to — southern Africa.”

“I’ve decided that we’re going to be cautious and make sure there is no travel to and from South Africa and six other countries in that region, except for American citizens who are able to come back,” Biden said.

“Biden also attempted to reassure spooked financial markets,” the Post added. “He called a steep drop in stock values during the holiday weekend-shortened session ‘expected’ because of prior drops after poor pandemic news and said he was ‘not at all’ worried.”