On Wednesday, CDC Director Dr. Rochelle Walensky and U.S. Surgeon General Dr. Vivek Murthy testified before the House Select Subcommittee on the Coronavirus Crisis. They were in virtual attendance to discuss the Omicron BA.2 subvariant, immunizations, boosters, and allegations the CDC allowed a teachers’ union to dictate guidance on reopening schools in early 2021.

But Dr. Fauci couldn’t make it. The pathetic reason was highlighted by Rep. Steve Scalise. Watch:

“I’m glad that the Biden administration officials are here to testify at this public hearing before the subcommittee,” Scalise said. “It’s definitely been quite a while since we’ve had this kind of testimony. I appreciate all of you joining us.”

“I would like to note that we also invited Dr. Anthony Fauci, the chief medical advisor to president Biden and the Director of the National Institute of Allergy and Infectious Diseases. But regrettably, he sent this letter that he was unable to attend, because he would need to be invited by the Chairman with permission from the Biden administration.”

Scalise then held up a copy of the letter that was sent to Dr. Fauci. 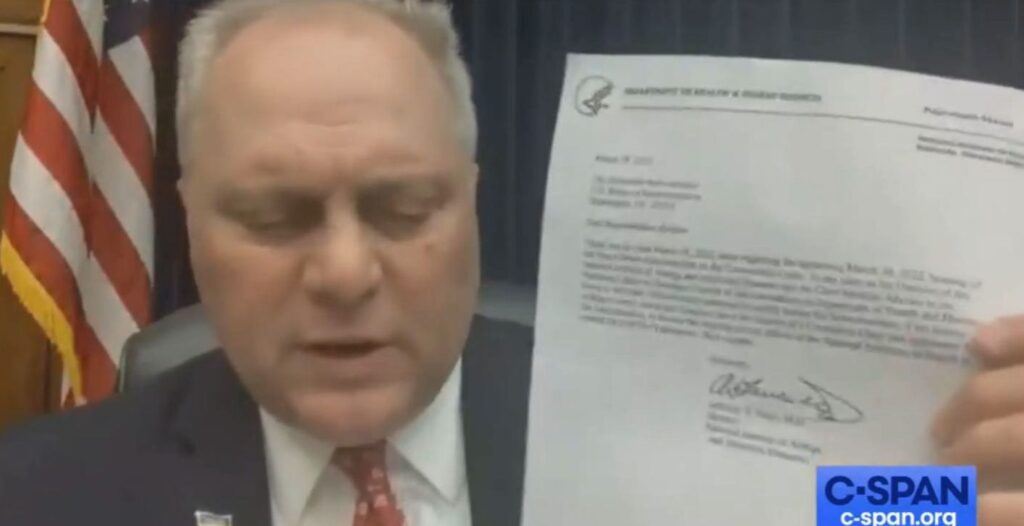 “So, Mr. Chairman, hopefully you will invite Dr. Fauci,” Scalise said to Chairman Jim Clyburn. “I think we all want to hear from him. Just as a note, it’s been 309 days since we’ve heard Dr. Fauci testify before any committee in the House.”

Scalise then held up a print out that showed that Pelosi has been ‘silencing’ Dr. Fauci.

“So, I don’t know if Speaker Pelosi is trying to silence Dr. Fauci,” he said. “We asked that he come, he was not ‘allowed’ to come, and I think he should be part of this hearing. I sure hope we rectify that soon.”

Fauci did, however, had time to do foreign media hits. On Sunday, he was confronted on the BBC about whether or not the lockdowns were too ‘severe.’

Dr. Fauci says he doesn't think we'll ever be able to determine if Covid lockdowns were worth it. pic.twitter.com/gy34yUAAlc

“I’m interested in your reluctance to use the word ‘lockdown’,” the BBC interviewer said. “Do you think two years on that they were worth it or were they too severe?”

“You know, I don’t think we’re ever going to be able to determine what the right balance is,” Fauci claimed. “I think ‘restrictions,’ if you want to use that word, which I tend to shy away from ‘lockdown,’ they certainly prevented a lot of infections, prevent a lot of hospitalizations, and prevented a lot of deaths,” he claimed without providing any evidence.

“There’s no doubt about that,” Fauci nonetheless stated. “Obviously, when you do have that kind of restriction on society, there are unintended negative consequences, particularly in children who are not allowed to go to school in the psychological and mental health aspects that it has on children, in the economic stress that it puts on society in general, on individual families. Obviously those are negative consequences that are unintended.”

Now that it’s time to talk about all of those “negative consequences,” Dr. Fauci is nowhere to be found. At least, not in the Congress, where he is unlikely to get as warm and fuzzy a reception as he gets from his sycophants in the mainstream media.

Dr. Fauci Distances Himself from Destructive ‘Lockdowns’ Model He Appears to Have Imported from Communist China