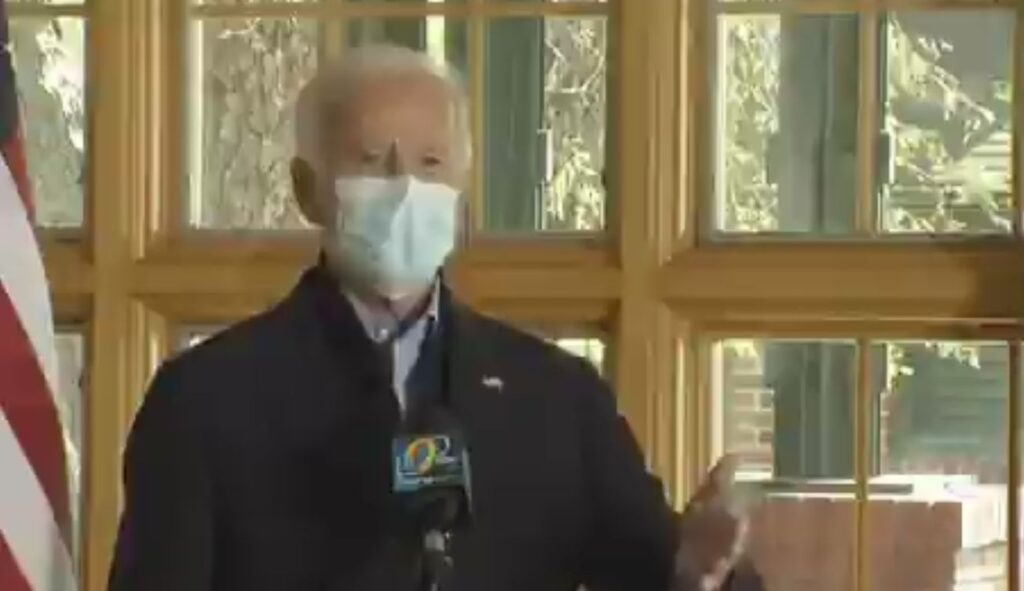 Now-President Joe Biden once charged that Donald Trump’s accusation that Hunter Biden’s laptop contained incriminating information of his business ties to China and Ukraine was nothing but a ‘smear.’ Watch:

“So what about the Americans who really today only want me to ask you about Hunter Biden’s laptop?” KCRG Anchor Beth Malicki asked him in October 2020. “How are you going to get them to see that you are fighting for them when they’re so dead-set against you?”

“We are four days left and all of a sudden there’s a laptop,” he continued. “And you may recall, there’s also talk about four months before there was a similar thing that somebody had allegedly. There’s overwhelming evidence that — from the intelligence community — that the Russians are engaged.”

“I mean, look, this is — my son’s an honorable man and all the investigations that were done around the issue of what was going on Ukraine, if you notice, every one of the major people who worked for Trump during the impeachment went under oath and under oath said Biden did his job,” he added.

“No law was broke — Biden, this Biden, did his job. Hunter Biden broke no laws. That was a testimony, their testimony from Republicans and intelligence community people,” he went on. “So, I think that it’s — you know, I just think — look, politics have become too crass, too dirty, too ugly, and and the perpetrator of an awful of this has been — he didn’t start it all, but he has taken it to a new level, this president.”

Joe Biden repeatedly denied there was any truth to the Hunter Biden laptop story.

Jen Psaki personally touted the deliberately false intelligence report.  On Friday, she snapped at a reporter who brought the Hunter Biden laptop story up.

CBS’s Leslie Stahl tried to shut Trump down during an interview when he brought up the Hunter laptop story.

Remember when Trump was right about Hunter’s laptop and Leslie Stahl refused to hear it?pic.twitter.com/9vpXHQp8Pg

Here is the exchange, for the record:

TRUMP: “Why did Hunter get three and a half million dollars from Moscow?” Instead of, “Why is an energy company paying your son $183,000 a month, or whatever they’re paying him?” And he has no experience in energy. You discredit yourself. I don’t have to discredit you.

STAHL: So this story about Hunter and his laptop, some repair shop found it, the source is Steve Bannon and Rudy Giuliani.

TRUMP: I don’t know anything about that. I just know it’s a laptop and they haven’t-

STAHL: And you’re making this one of the hottest, most important issues…

TRUMP: I don’t know about the two gentleman you mentioned.

TRUMP: It’s a very important issue to find out whether or not a man is corrupt, who’s running for president. Who’s accepted money from China, and from Ukraine, and from Russia. Yeah, I think that’s an important issue.

STAHL: All these things have been investigated and discredited.

TRUMP: It’s incredible the way you can try and say this and sit there and look me in the eye and say it. He accepted money, his family, from Russia, from Ukraine, from China and from other places. His brother who didn’t have experience became a big builder in Iraq, without experience. Take a look at what’s going on, Lesley. And then you say that shouldn’t be discussed? It’s the biggest scandal out there, Lesley.

STAHL: And you think it’s the biggest issue to campaign on?

TRUMP: I think it’s one of the biggest scandals I’ve ever seen, and you don’t cover it. You want to talk about-

STAHL: Well, because it can’t be verified.

This was a lie. The New York Times’ corroboration of the Hunter laptop emails was buried deep within its story, but nonetheless shows that Hunter Biden could be guilty of yet another crime: Knowingly avoiding Foreign Agent Registration Act requirements while his father ran for president.

“Last year, prosecutors interviewed Mr. Archer and subpoenaed him for documents and grand jury testimony, the people said. Mr. Archer, who was sentenced last month in an unrelated securities fraud case in which a decision to set aside his conviction was reversed, had served with Mr. Biden on Burisma’s board, starting in 2014,” the Times reported.

“People familiar with the investigation said prosecutors had examined emails between Mr. Biden, Mr. Archer and others about Burisma and other foreign business activity,” the report added. “Those emails were obtained by The New York Times from a cache of files that appears to have come from a laptop abandoned by Mr. Biden in a Delaware repair shop. The email and others in the cache were authenticated by people familiar with them and with the investigation.”

“In some of the emails, Mr. Biden displayed a familiarity with FARA, and a desire to avoid triggering it,” the report noted.

The intelligence community latched onto the bogus “Russian disinformation” narrative at a critical point in the 2020 election campaign. Natasha Betrand was one reporter that pushed the IC’s report.

“More than 50 former senior intelligence officials have signed on to a letter outlining their belief that the recent disclosure of emails allegedly belonging to Joe Biden’s son ‘has all the classic earmarks of a Russian information operation’.”

Former acting DNI director Richard Grenell pointed out that none of the IC officials had a shred of hard evidence the laptop story was ‘Russian disinformation.’

Here are the names of the 50 intel officials who signed a letter saying Hunter Biden's laptop was "Russian disinformation." As @RichardGrenell has pointed out, none of these officials had a single piece of raw intel indicating it was disinformation. They made it up to help Biden. pic.twitter.com/l8rRXuDW1L

The New York Post plastered these election riggers’ faces in a cover story.

This is yet another in an endless list of scandals the deep state is committing against the American people. Trump was right. Even more than that, he was a threat to their traitorous schemes. That’s why they collaborated to ‘take him out.’ The proof is undeniable at this point. Even former Attorney General Bill Barr admits the election was “rigged.”

The question remains: What are we going to do about it?