President Joe Biden erupted into a coughing fit at an East Jerusalem hospital while on his Israel trip on Friday.

Afterwards, he stopped to give an explanation for coughing so much. Watch:

Biden stopped to take a drink of water.

Joe Biden also got confused while leaving the stage.

Joe Biden gets confused while leaving the stage. pic.twitter.com/lRGJgqBRy8

The president’s poor physical health is a cause for concern, but his mental health shows that he lacks the awareness to know there are some things the international audience could do without hearing.

The White House’s handlers have urged President Joe Biden to avoid any handshakes with world leaders, preaching instead he use ‘fist bumps,’ purportedly to avoid Covid-19. The Democratic Party is hyping a ‘midterm variant’ that the party hopes will lead to the continuation of ‘no excuse’ mail-in ballots that would limit the damage in a coming elections bloodbath.

The Democrat faithful in the mainstream media have dutifully repeated the White House’s Covid hysteria, which has spread faster than the variant itself. 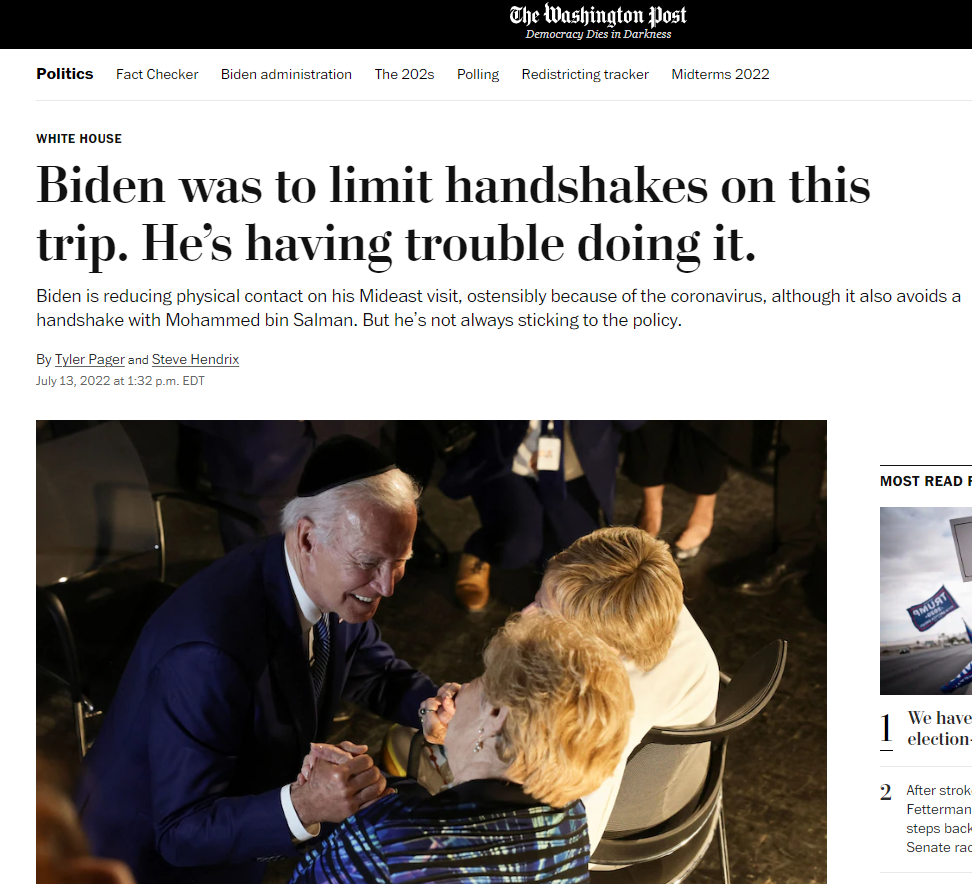 The Washington Post’s reporting shows there may be a hidden reason behind the apparent directive — avoiding an embarrassing handshake with Saudi Crown Prince Mohammed bin Salman Al Saud, known as MBS.

As National Review noted: “The president had attempted to obscure the fact that he even planned to meet MBS.” A White House statement “that conspicuously omitted any mention of a Biden–MBS meeting was quickly undercut by a statement from the Saudi embassy confirming that there would in fact be a meeting between the two.”

Joe Biden made a big pledge on his campaign trail that he would punish the Saudis for the implicated assassination of Saudi journalist and alleged CIA asset Jamal Khashoggi, who was a key point person with Osama bin Laden in the early 1980s.

“Jamal Khashoggi and his loved ones deserve accountability,” a White House statement in October 2020 read. “Under a Biden-Harris administration, we will reassess our relationship with the Kingdom, end U.S. support for Saudi Arabia’s war in Yemen, and make sure America does not check its values at the door to sell arms or buy oil. America’s commitment to democratic values and human rights will be a priority, even with our closest security partners.”

The Saudi crown prince’s human rights violations are a serious concern for international observers, but Joe Biden now has to go to MBS on bended knee in order for the oil-rich regime to ramp up production to offset his disastrous energy policies at home.

As the Times of Israel pointed out, “scientists today generally agree that people simply don’t catch COVID-19 as a result of physical contact.”

“US President Joe Biden is fist-bumping his way around Israel,” the Times reported. “But his attempt to reduce palm-to-palm contact time during his Middle East trip won’t actually protect him against the coronavirus, medical officials say.”

Thus, the White House handlers’ handshake ban that Biden is flaunting is irrelevant for preventing Covid. But Biden’s symptoms are a cause for concern as the president’s poor health and frailty have become impossible to ignore.

In March, President Biden had accidentally blurted out that he had tested positive for Covid.

By June, the White House declined to say when President Joe Biden last received a COVID-19 test despite meeting with Canadian Prime Minister Justin Trudeau, who had reportedly tested positive for the virus.

Thus, President Biden may have Covid, and the American people might not even know it.