Elon Musk’s takeover of influential social media platform Twitter has been a watershed moment in Big Tech’s brief history. The billionaire tech CEO’s push for free speech, transparency, and accountability has been a refreshing change of pace for a digital landscape that had become dominated by a Woke oligopoly.

Musk’s tenure at Twitter commencing days before the 2022 midterm elections has come with its fair share of controversy. The ‘Twitter Files,’ a series of exposes spearheaded by journalists Matt Taibbi and Bari Weiss, have shaken Americans’ faith in the U.S. government’s ability to respect the free speech rights of American citizens.  On issues ranging from the FBI and DHS’s policing of speech about elections to the CDC’s micromanagement of Americans’ views on the Covid policy response, Twitter has been at the forefront of enforcing the state’s preferred narratives.

While Musk has championed free speech, he has banned a number of journalists whom he accused of doxxing his plane’s exact location. While the information was technically “publicly” available, it took specialized knowledge to scrape the information and produce it in a publicly consumable format. More controversially, Musk recently suspended Washington Post tech reporter Taylor Lorenz, who herself has doxxed citizens such as famous microblogger Libs of Tik Tok, but was given access to the social media platform as of Sunday morning.

Thus, Musk’s bold leadership has accompanied a rocky relationship with the national press; unsurprising, given the progressive literati is counting on a monopoly of public information in order to push through unpopular policies and to police political dissent. But things appear to be coming to a head for the new CEO, as he has floated a surprising new poll asking if he should step down.

“Should I step down as head of Twitter?” he asked. “I will abide by the results of this poll.” 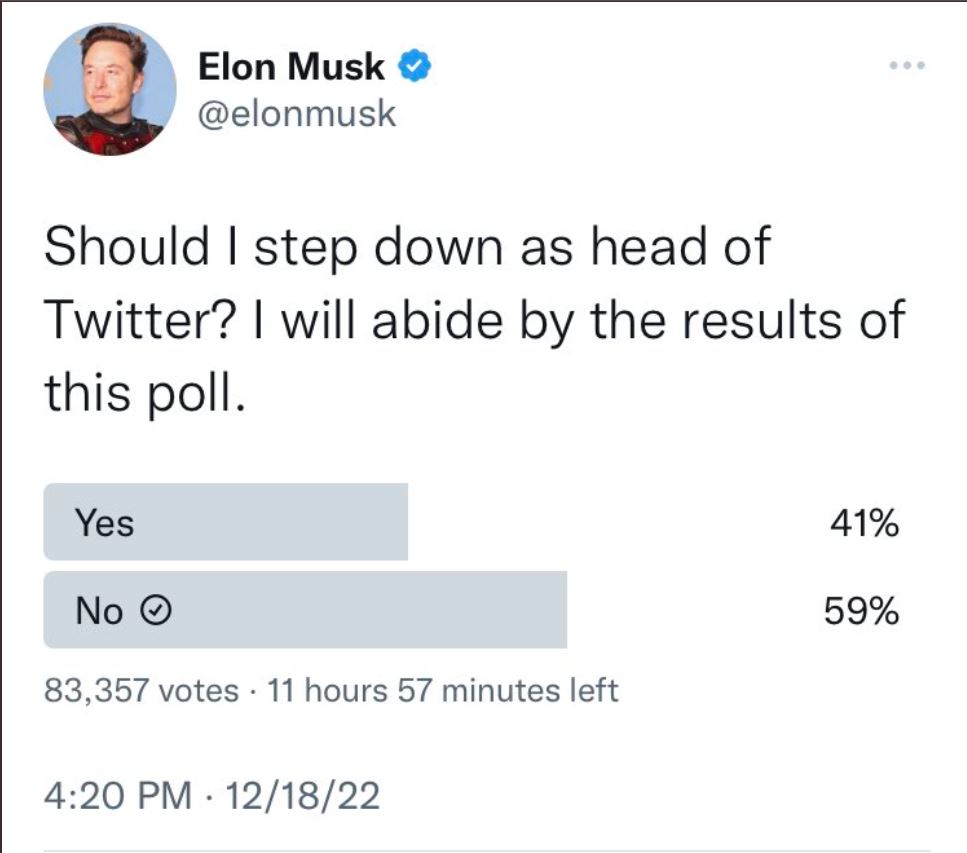 In the first few minutes, the votes were marginally, but decidedly against Musk stepping down. The tide eventually turned, whether organically or through the result of ‘bots.’

With 11 hours left in the poll, the momentum is pushing towards Elon Musk’s reign as the Twitter Chief coming to an end.

Conservatives who were enjoying Musk’s tenure as Twitter CEO were not happy with him even running the poll.

“Why would you even consider stepping down as head of Twitter?” Michelle Whitzel asked.

“Not no, but hell no!” Jason Jones replied.

“I suspect Elon already has his replacement selected and this is just a poll to make it seem like we are deciding,” Wall Street Silver mused.

Whoever will be running Twitter, let’s hope they have Elon Musk’s commitment to free speech and leveling the playing field. The fate of the country may very well be at stake.