Elon Musk is making big changes to Twitter. None may be bigger than ending the ‘Covid misinformation’ policies that resulted in the banning of thousands of users. 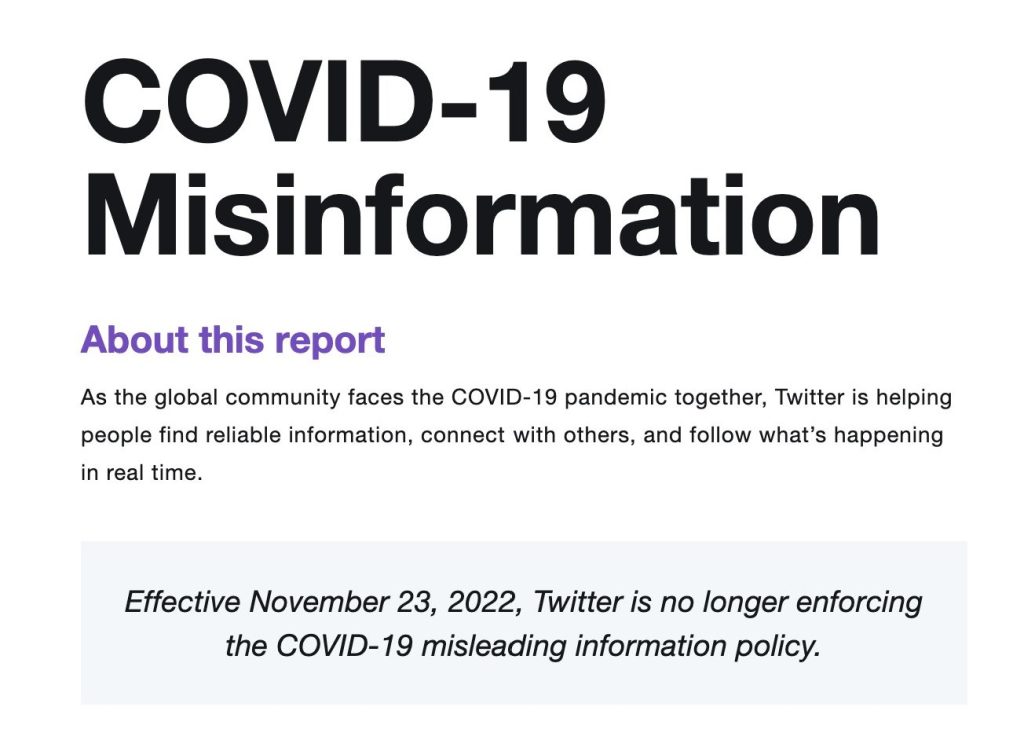 As I explained on Twitter, the Covid policy change now means that the social media platform is now a level playing field for users to correct the Experts™ misinformation:

In 2020, Twitter adopted the rules to prohibit alleged “harmful misinformation” about Covid and the mRNA shots advertised as “vaccines.”

“Between January 2020 and September 2022, Twitter suspended more than 11,000 accounts for breaking Covid misinformation rules and removed almost 100,000 pieces of content that violated those rules, according to statistics published by Twitter,” CNN noted. “The policy received acclaim from medical professionals: In an advisory to technology platforms, US Surgeon General Dr. Vivek Murthy cited Twitter’s rules as an example of what companies should do to combat misinformation.”

Elon Musk has pledged to restore many of the previously banned Twitter accounts as soon as this week. It is possible that among the restored accounts will be some of the 11,000 that were banned under Twitter’s former Covid misinformation rules, such as Dr. Robert Malone and Dr. Peter McCullouch.

“I would call it, ‘forcibly imprisoning people in their homes’ against all their Constitutional rights, in my opinion, and breaking people’s freedoms in ways that are horrible and wrong and not why people came to America or built this country,” Musk said on the call. “It’s an outrage.”

Musk says he has twice had Covid. Although he has at times praised the Covid vaccines, he never supported the mandates. “I’m not at risk for Covid, nor are my kids,” he said.

Examples of Covid misinformation spread by the “Experts,” include: 15 days to stop the spread, “masks work,” “lockdowns work,” Covid vaccines stop infection, the vaccines are “100% safe and effective,” and they stop the spread of the virus. These claims have all proven to be false.

The New York Times nonetheless lamented the loss of the Covid “Experts,” who were responsible for allowing false claims from Big Pharma, the CDC, the FDA and Dr. Anthony Fauci, among others, run unchecked, while banning and censoring users that questioned the purported “Science.”

“In the weeks since Elon Musk took over Twitter, dozens of people responsible for keeping dangerous or inaccurate material in check on the service have posted on LinkedIn that they resigned or lost their jobs,”reporter Tiffany Hsu lamented. “Their statements have drawn a flood of condolences — and attempts to recruit them.”

“Overtures arrived from rival tech services, retailers, consulting firms, government contractors and other organizations that want to use the former Twitter employees — and those recently let go by Meta and the payments platform Stripe — to track and combat false and toxic information on the internet,” the Times added.

That’s a shame. Moving forward, scientists and public health professionals should actually make claims that stand up to scrutiny, don’t defy decades of established biomedical research, and aren’t inevitably proven to be false and misleading.