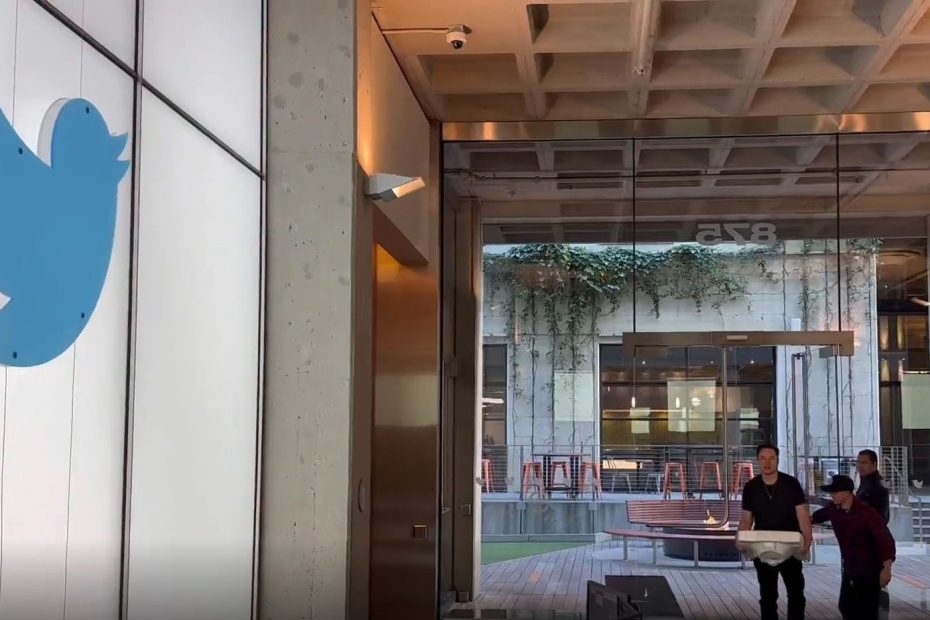 Elon Musk walked triumphantly into Twitter headquarters on Wednesday, ahead of his takeover of the Big Tech giant. His $44 billion buyout deal is now widely expected to close any day now.

In Musk’s hands in the video was a sink — symbolic of his quest to cleanse the influential social media platform of its insidious censorship and his plans on what to keep at the company after he throws its content policies out.

The sight of Musk at Twitter headquarters was a relief for many on the social media platform who have watched his takeover efforts with angst.

Musk plans to axe 75% of the Twitter thought police who have served as the digital vanguard for the Democratic Party and left-wing progressives for years.

On late Monday, Time procured a copy of a missive from Woke Twitter employees to Elon Musk and the Board of Directors ahead of the takeover deal finally closing.he game as last week, there were rumblings that the Biden administration was scrambling to halt the deal with a “national security review,” based purportedly on the premise that Musk had been serving as a liaison for the Putin regime. The Biden administration has denied it is was conducting such a “national security review.”

Staff, Elon Musk, and Board of Directors:

We, the undersigned Twitter workers, believe the public conversation is in jeopardy.

Elon Musk’s plan to lay off 75% of Twitter workers will hurt Twitter’s ability to serve the public conversation. A threat of this magnitude is reckless, undermines our users’ and customers’ trust in our platform, and is a transparent act of worker intimidation.

Twitter has significant effects on societies and communities across the globe. As we speak, Twitter is helping to uplift independent journalism in Ukraine and Iran, as well as powering social movements around the world.

A threat to workers at Twitter is a threat to Twitter’s future. These threats have an impact on us as workers and demonstrate a fundamental disconnect with the realities of operating Twitter. They threaten our livelihoods, access to essential healthcare, and the ability for visa holders to stay in the country they work in. We cannot do our work in an environment of constant harassment and threats. Without our work, there is no Twitter.

We, the workers at Twitter, will not be intimidated. We recommit to supporting the communities, organizations, and businesses who rely on Twitter. We will not stop serving the public conversation.

We call on Twitter management and Elon Musk to cease these negligent layoff threats. As workers, we deserve concrete commitments so we can continue to preserve the integrity of our platform.

We demand of current and future leadership:

Respect: We demand leadership to respect the platform and the workers who maintain it by committing to preserving the current headcount.

Safety: We demand that leadership does not discriminate against workers on the basis of their race, gender, disability, sexual orientation, or political beliefs. We also demand safety for workers on visas, who will be forced to leave the country they work in if they are laid off.

Protection: We demand Elon Musk explicitly commit to preserve our benefits, those both listed in the merger agreement and not (e.g. remote work). We demand leadership to establish and ensure fair severance policies for all workers before and after any change in ownership.

Dignity: We demand transparent, prompt and thoughtful communication around our working conditions. We demand to be treated with dignity, and to not be treated as mere pawns in a game played by billionaires.

In summary, the Twitter workers are demanding to keep their jobs, even if their worldview does not align with the incoming owner’s values, because Elon Musk somehow owes it to them.

But text messages between Tesla CEO Elon Musk and a number of his contacts that were made public in early October suggest he has other plans.

Musk is unfazed by a coming mass exodus of Twitter employees if the takeover deal closes.

“It’s a free country,” Musk told reporters at the annual Met Gala in New York in May, adding: “Certainly if anyone doesn’t feel comfortable with that, they will on their own accord go somewhere else. That’s fine.”

The tech guru has demanded that Twitter staff should work in-office for at least 40 hours a week or find another job. Musk, in a now-deleted April 9 tweet, puckishly asked his millions of followers if Twitter’s San Francisco headquarters should be converted to a “homeless shelter since no one shows up anyway” due to the company’s permanent work-from-home policy. More than 90% of poll respondents answered yes, as reported by the San Francisco Chronicle.

There have been rumors that the State of California would go after Musk if he acquires the San Francisco-based company, even after he made good on a threat to move Tesla headquarters to Austin, Texas. Nonetheless, Musk is considering closing the recently expanded San Francisco headquarters once his purchase of the company is complete, the Wall Street Journal reported.