Whether or not Jeffrey Epstein killed himself in prison has fueled rampant speculation in the American public for over a year due to the vast implications for the Hollywood and political circles the convicted pedophile ran in. There are significant questions still lingering from Epstein’s sudden death in prison in August 2019. Evidence was falsified or destroyed to ensure those questions cannot be readily answered.

Two prison guards who have admitted to falsifying evidence and exhibiting negligence in their duties to check on Mr. Epstein while he was on “suicide watch,” entailing 30-minute checks, will not face prosecution for their crimes. It is the latest display of failure for a criminal justice system where the rich and powerful are shielded from scrutiny for potentially reprehensible behavior; in this case, the possibility of association with underage sex trafficking.

The two prison workers involved in the case, Tova Noel and Michael Thomas, admitted to falsifying records, but avoid time behind bars due to a deal with federal prosecutors, the Associated Press reported.  As a letter on the plea deal states, they “admitted that they ‘willfully and knowingly completed materially false count and round slips regarding required counts and rounds.’”

The prison guards also “were accused of sleeping and browsing the internet instead of monitoring Epstein” when he was reported to have committed “suicide,” as was later ruled by New York City’s medical examiner.

“As part of the deal with prosecutors, they will enter into a deferred prosecution agreement with the Justice Department and will serve no time behind bars, according to a letter from federal prosecutors that was filed in court papers Friday,” the AP reported. “Noel and Thomas would instead be subjected to supervised release, would be required to complete 100 hours of community service and would be required to fully cooperate with an ongoing probe by the Justice Department’s inspector general, it says.”

As the New York Post reported, U.S. Attorney Audrey Strauss wrote the plea deal letter to Federal Judge Analisa Torres, which was filed Friday. “After a thorough investigation, and based on the facts of this case and the personal circumstances of the defendants, the Government has determined that the interests of justice will best be served by deferring prosecution in this District,” the letter states. It will have to be approved by the federal judge, which is a fait accompli that may come as soon as next week.

“One hundred hours of community service is a joke — this isn’t traffic court,” Senator Ben Sasse reacted in a statement. “The leader of an international child sex trafficking ring escaped justice, his co-conspirators had their secrets go to the grave with him, and these guards are going to be picking up trash on the side of the road.”

The New York Times’ report on the federal prosecutors’ deal suggests there is no question that Epstein killed himself.

“Security cameras did not show anyone entering the cellblock where Mr. Epstein was housed, the indictment said, suggesting that despite the conjecture and conspiracy theories swirling around him and his connections to powerful people, his death was a suicide as New York City’s chief medical examiner had ruled,” it asserted.

However, surveillance camera footage was erased that would fill in gaps in Epstein’s prison security.

Jeffrey Epstein moved in Hollywood circles and associated with the rich and powerful. An exposé by The Hollywood Reporter in 2019 shows that he was still closely accepted by famous socialites, despite his 2008 conviction for “soliciting prostitution from girls as young as 14.”

“As Epstein’s July 6 arrest for sex trafficking of minors in New York and Florida dominates headlines, news outlets have focused on the billionaire’s ties to powerful government officials, including presidents Clinton and Trump,” THR reported. “Equally troubling are Epstein’s long-cultivated relationships within Hollywood and New York media circles, where he moved with ease well after his high-profile 2008 conviction for soliciting prostitution from girls as young as 14.”

“After serving a 13-month sentence and a subsequent year of house arrest in Palm Beach, Florida, Epstein in late 2010 hosted a dinner party in honor of his friend Prince Andrew at his 71st Street mansion in New York,” THR continued. “Among the 15 to 20 guests, the New York Post reported at the time, were Katie Couric, Charlie Rose, Woody Allen, Chelsea Handler and George Stephanopoulos.”

Donald Trump disavowed any significant relationship with Epstein and clarified that he was not welcome at Mar-a-Lago.

“Well I knew him like everybody in Palm Beach knew him,” Trump said. “He was a fixture of Palm Beach. I had a falling out with him a long time ago, I don’t think I’ve spoken to him for 15 years. I wasn’t a fan.” 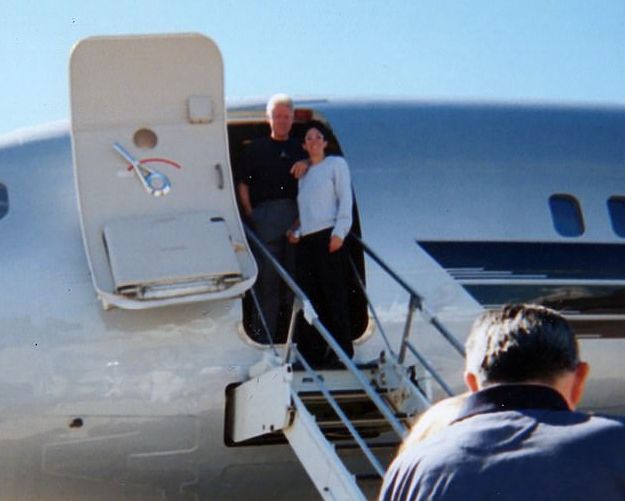 “Former President Bill Clinton took more flights aboard a jet belonging to a registered sex offender than previously thought, according to a FoxNews.com analysis of flight logs,” Roll Call noted in 2016. Above Clinton is pictured with Epstein’s liaison Ghislaine Maxwell in front of Epstein’s private jet.

“The logs showed Clinton took at least 26 flights, not 11 as first believed, aboard financier Jeffrey Epstein’s Boeing 727 jet between 2001 and 2003, the first two years he was out of office,” the report continued. “The former president took at least five of those flights without his Secret Service detail, FoxNews.com reported.”

There is one case still open that may provide more resolution of the sleazy details of Epstein’s global underage sex trafficking ring. It is the case of Ghislaine Maxwell.

“Ghislaine Maxwell, the British socialite who was Mr. Epstein’s longtime companion, is awaiting trial on charges that she contributed to his abuse of teenage girls more than two decades ago,” the New York Times reported. “She has pleaded not guilty and has sought several times, unsuccessfully, to be freed on bail.”

The web that Epstein wove with the world’s richest and most powerful people has nonetheless become relatively clearer with time, despite legal and media attempts at obscuration. Microsoft Founder, philanthropist, and vaccine advocate Bill Gates, worth an estimated $100 billion, also associated himself with Epstein, as has been reported widely in connection to a recent divorce.

“It makes sense why Epstein needed Bill Gates,” the Observer notes. “It makes far less sense why Bill Gates needed Jeffrey Epstein—a convicted sex offender with other known serious character flaws (a very nice way of describing someone accused, credibly, of serial pedophilia). Gates has yet to adequately account for this relationship, and if more details trickle out that also conflict with his version of events, his dissimulating will be increasingly suspicious.”

There is very little about the Epstein case that isn’t “suspicious.” Only one-third of Americans believe Jeffrey Epstein committed suicide behind bars, according to a poll by Emerson College.