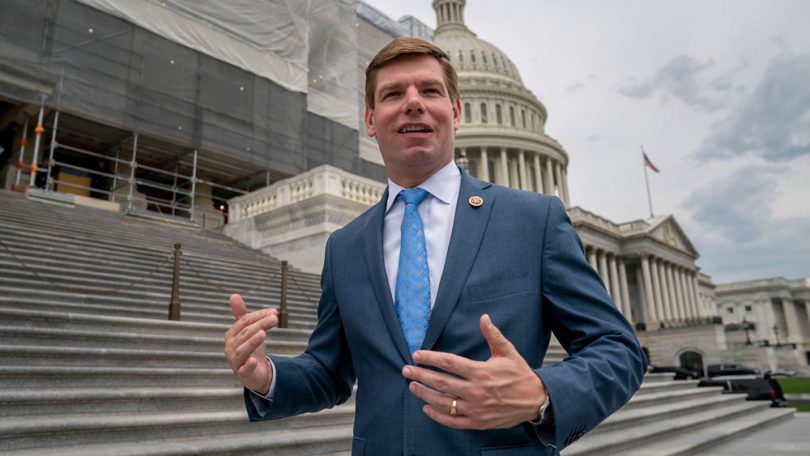 Eric Swalwell’s office harassed Rep. Mo Brooks and his wife over a frivolous lawsuit related to the January 6th events. Now, one of Swalwell’s team has been hit with an arrest warrant.

“On Wednesday, U.S. Rep. Mo Brooks (R-Ala.) said he and his wife have sworn out an arrest warrant for Christian Seklecki, the man who served a lawsuit to their home on June 6,” CBS reported.

“According to a statement from Brooks, the warrant seeks to charge Seklecki with criminal trespass in the first degree,” the report continued. “Alabama Code sets the penalty for criminal mischief in the first degree at up to a year in jail and a fine of $6,000.”

An excerpt from the press release is below:

Congressman Eric Swalwell lied in his politically motivated, meritless lawsuit against President Donald Trump and me when he falsely claimed I incited the January 6th Capitol violence. Swalwell’s attorneys lied again when they strutted in front of the news media like peacocks in heat and falsely accused me of avoiding Swalwell’s lawsuit service when the fact is they could have served me roughly a hundred times before, during or after both Swalwell and I voted together on the House floor, or served me by U.S. Mail to my home address. In fact, when they finally got serious about serving me with the lawsuit, they served me not once, not twice, but three times, all within one week! So much for avoiding service or being difficult to find.”

“Mo and I take our security very seriously, as do all families,” said Martha Brooks. “My hope is that my actions today will cause the process server to think twice before illegally invading the sanctity of someone else’s home, and put those who would threaten our security on notice that we will pursue illegal actions to the fullest extent of the law.”

The video shows the process server ‘chasing’ Mrs. Brooks into the garage. Thus far, only one member of Swalwell’s team has been served with an arrest warrant.