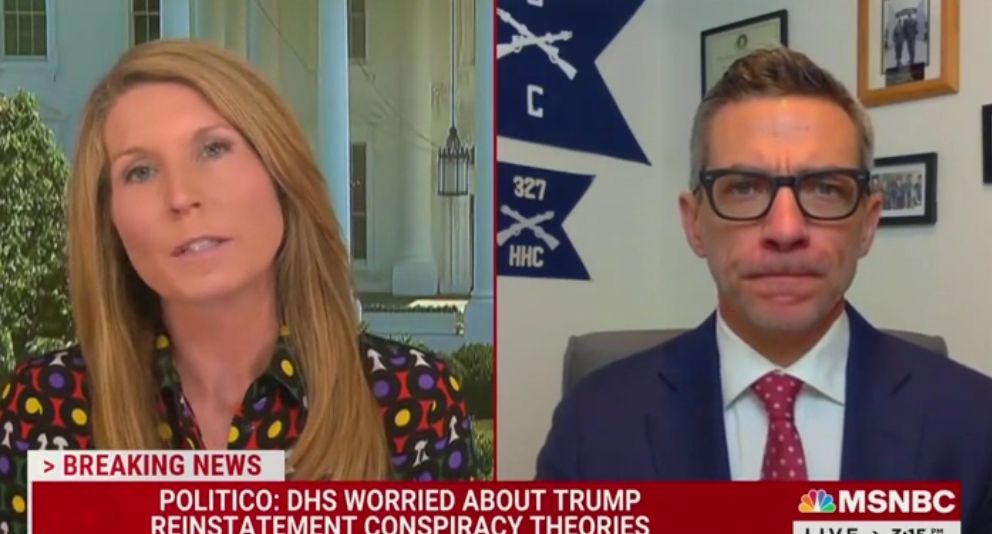 “Let me go there,” Wallace said. “DHS is now concerned about a new conspiracy theory, a new Trump-inspired, Trump-incited kind of rage, white rage to use the words of General Milley yesterday.”

“And it’s this. They’re concerned about the Trump reinstatement conspiracy theory,” she said. “An exchange came in a members-only briefing that John Cohen, DHS’ top counter-terrorism official, gave to the House Committee on Homeland Security. Cohen told lawmakers that DHS is not aware of any specific, credible threats of violence linked to the conspiracy theory about Trump being reinstated.”

“But he added that DHS is following discussion of the topic online among extremist communities,” she said. “And he said department officials are highly concerned about it because it fuels the false narrative that the election was rigged, and that’s a narrative that may trigger a violent response from extremists. It’s just jaw-dropping that the disgraced, twice-impeached, ex-president’s utterances are now a national security threat on an hourly, daily basis.”

“Yeah,” ex-FBI agent Clint Watt responded. “It is remarkable that it continues on. And it’s also remarkable well because there is still significant online discussion of this, which means, think if you’re a believer in this conspiracy and you’ve seen everything from QAnon to January 6th, the inauguration occurring, the ballot recounts failing and you still are pursuing this fantasy.”

It is ironic that Watt mentions QAnon, which many are coming to believe is a conspiracy theory hatched by the FBI itself to discredit the right.

“And how would it not lead to violence over time whenever each of these [indecipherable] and then don’t occur,” he continued. “And they keep committing to this over and over again.”

“So I think it’s particularly troubling and I think one advantage that we do have is the president is not on Twitter, Facebook and much of social media,” he added. “His website was not particularly successful. So it has muted his ability to really rally that base and he’s been in a limited number of public appearances.”

“But that were to change and the conspiracies sort of to start to pick up again,” he continued. “If you start to see a sizeable audience gathering, that DHS assessment is right on target.”

It is ironic that Watt is referring to social media on the same day that Donald Trump dropped a hit that he may finally launch his own rival social media platform in the near future.

“Watch what I do to Big Tech this week,” he said in an interview with Newsmax’s Rob Finnerty and Ric Grenell on Friday morning.

Watt continued to distort and exaggerate the “risk” an ex-president guilty of no provable crimes and backed by tens of millions of peaceful, law-abiding citizens supposedly poses to the country with the free exercise of his speech.

The hard left continues to frame Donald Trump for all manner of imagined crimes, suggesting, falsely, that the president is a traitor. The president purportedly inciting the January 6th “insurrection,” an event where no one inside the Capitol was proven to be armed with firearms, and no one was demonstrably killed by protesters, being paramount among these conspiracy theories.

Conflating the duly elected president’s free speech with deadly terrorist attacks from ISIS and al Qaeda is misleading and despicable, but sadly, Americans can’t expect any better from the lamestream media — or the FBI.