Exclusive: It’s ‘Game Over’ for the CDC If These Death Rates Hold True

A “Wildfire” exclusive investigation reveals that weekly average deaths and all-cause “excess mortality rates,” the ultimate litmus test of whether or not health policies are working against the Covid pandemic, are failing to decline among elderly populations despite nearly a year of mass vaccination and other Covid response policies, such as mask mandates and lockdowns.

The finding has sweeping and profound ramifications for the evaluation of Covid response policies, such as the advocacy of universal vaccination regardless of risk or natural immunity. Since the elderly population is rapidly approaching more than 99% of the population being “fully vaccinated,” it is a critical determination of the utility of vaccines in the broader policy picture.

The results are corroborated both by the weekly average deaths by age group and the all-cause excess mortality rates (weighted by p-scores). The critical thing about all-cause excess mortality is that it is where the rubber meets the road on evaluating vaccines and the overall Covid policy response. The FDA and CDC can play all the data games they like when it comes to “Covid-related mortality,” but if a population has more than a 99% vaccination rate and the mortality rates do not decline, that speaks volumes about the purported efficacy of the vaccines.

“All-cause mortality is the single most important thing to focus on and it’s not there,” Dr. Jessica Rose remarked on evaluating vaccine efficacy. “Today, most people focus on the relative risk reduction of the vaccines against infection, hospitalization death from COVID. They pay less attention to the absolute risk reduction from COVID. And they pay no attention at all to the absolute all-cause mortality benefit. The funny thing is that we should be paying attention to these in the opposite order that we listed them.”

The data will come from the CDC and Our World in Data. We will use these two datasets, and independent investigators, academics, statisticians, and public health experts (provided they are intellectually honest), are invited to corroborate the findings by crunching the numbers themselves. While this investigation will provide the data as this author considers to be best practices, the data are there for the public to explore and the results will speak for themselves. Thus, one can criticize the methodology or the evaluation of the results, but the reported data are there.

We will first use the CDC’s data on Deaths to provide a baseline mortality rate picture. This is the clearest way most Americans can appreciate the finding. Specifically, there is a dataset called, “Weekly Deaths by State and Age.” 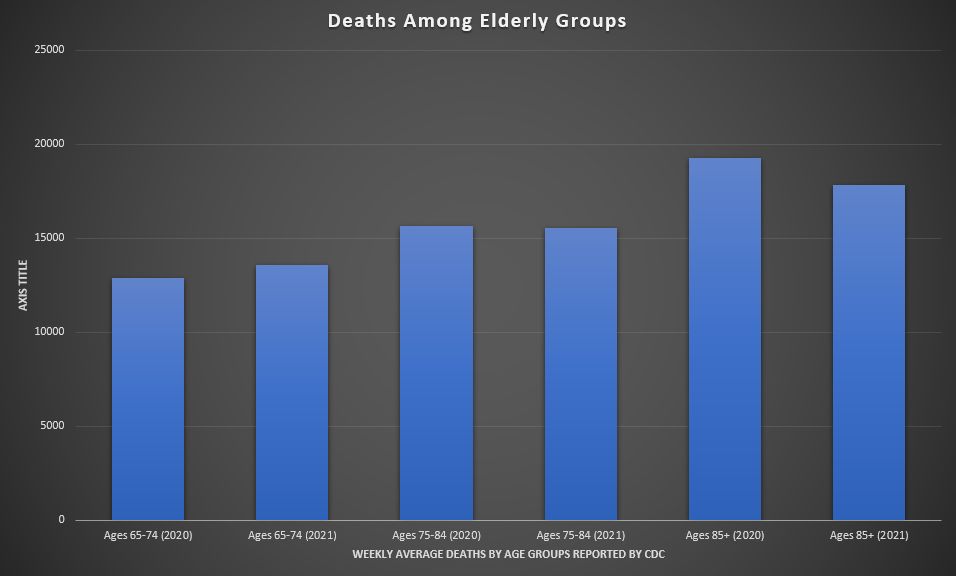 The 2021 picture is obviously incomplete, and runs currently reported excluding the final two weeks to provide ample time for all of the death certificates to be processed. (That would be up to 11/6/2021).

It should be noted that vaccines were first introduced to the public on January 4, 2020. The 99% vaccination rate among the 65 and older population was documented as November 11, 2021. The vaccination rate reported among that population was 97% as of October 28. Unless there is an exogenous variable among this population that is unknown, then it is a stated truth that the vaccines have thus far failed to lower the weekly reported deaths among this at-risk population. Hopefully, this number declines, but the trend has not significantly changed from 2020 levels.

The CDC itself provides snapshots of the raw overall numbers by year in its Covid-19 Mortality Overview. It helps contextualize the difference with the weekly averages, which are being used to assess rates.

Then there are the 2021 numbers: 272,905 deaths for the 65-and-over group (the 45-64 age group actually has increased, throwing into further doubt the universal vaccination agenda).

There is an additional critical note that has to deal with the way “Covid-related mortality” has been reported by U.S. public health authorities from the very beginning. It has been deliberately conflated by the U.S. media as if they are equivalent to Covid-caused mortality. However, there have been serious questions about this conflation — and the current data trend exposes this deceptive reportage.

The average age of Covid-related mortality in 2020 was approximately 78 years old, or near life expectancy. The CDC further reports that “[T]here were comorbidities or other conditions listed on the death certificate for 95% of all Covid-19 deaths.”

What were these comorbidities? (If you are wondering what happened to the nearly zero seasonal flu deaths reported in 2020, this provides a clue.)

Let us begin with a brief explanation about why this is from Our World in Data, which is a project of the University of Oxford. It explains why excess mortality matters in the Covid response picture. 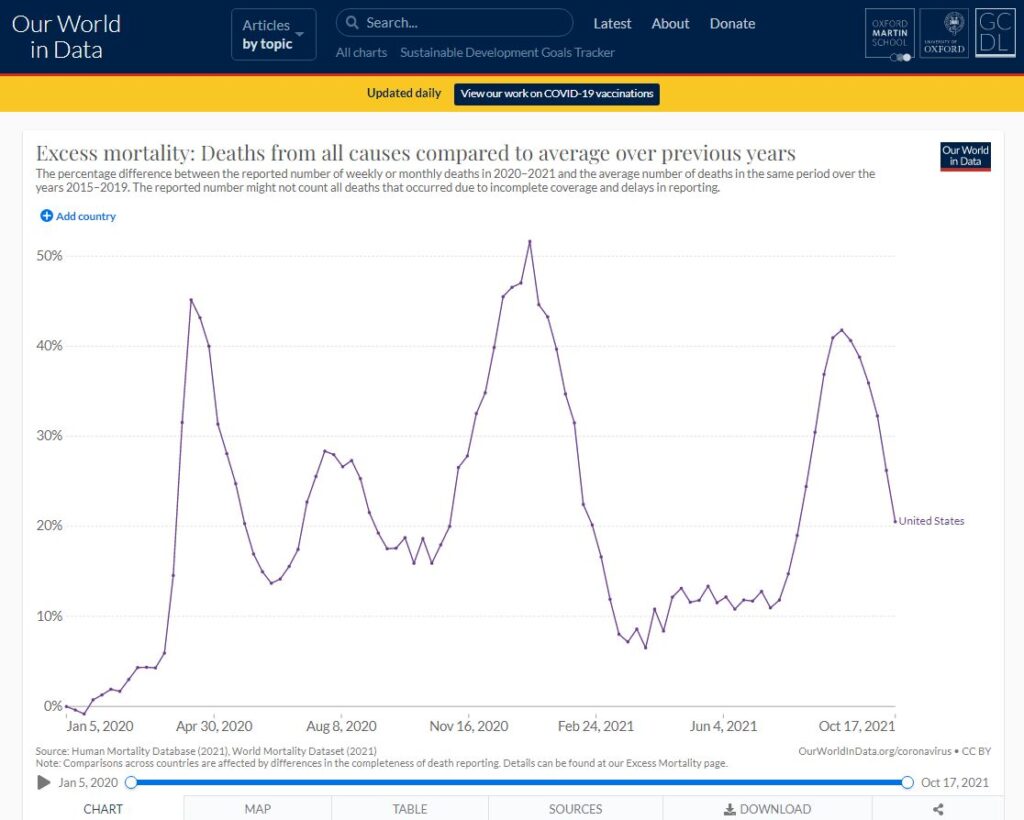 “Excess mortality is a term used in epidemiology and public health that refers to the number of deaths from all causes during a crisis above and beyond what we would have expected to see under ‘normal’ conditions,” the authors note. “In this case, we’re interested in how the number of deaths during the COVID-19 pandemic compares to the deaths we would have expected had the pandemic not occurred — a crucial quantity that cannot be known but can be estimated in several ways.”

“Excess mortality is measured as the difference between the reported number of deaths in a given week or month (depending on the country) in 2020–2021 and an estimate of the expected number of deaths for that period had the COVID-19 pandemic not occurred,” the authors define the term.

Furthermore, the Our World in Data breaks down the excess mortality with p-scores, which weight the data with additional factors.

“The raw number of excess deaths gives us a sense of scale, but it is less comparable across countries due to large differences in population,” the authors explain. “To better enable comparisons across countries, we measure excess mortality as the percentage difference between the reported and projected number of deaths. This metric is called the P-score…”

If one breaks down the p-scores (weighted excess mortality rates) using the Our World in Data dataset, one finds that the 65-74 age group increased, the 75-84 group declined, and the 85+ age group fell dramatically. 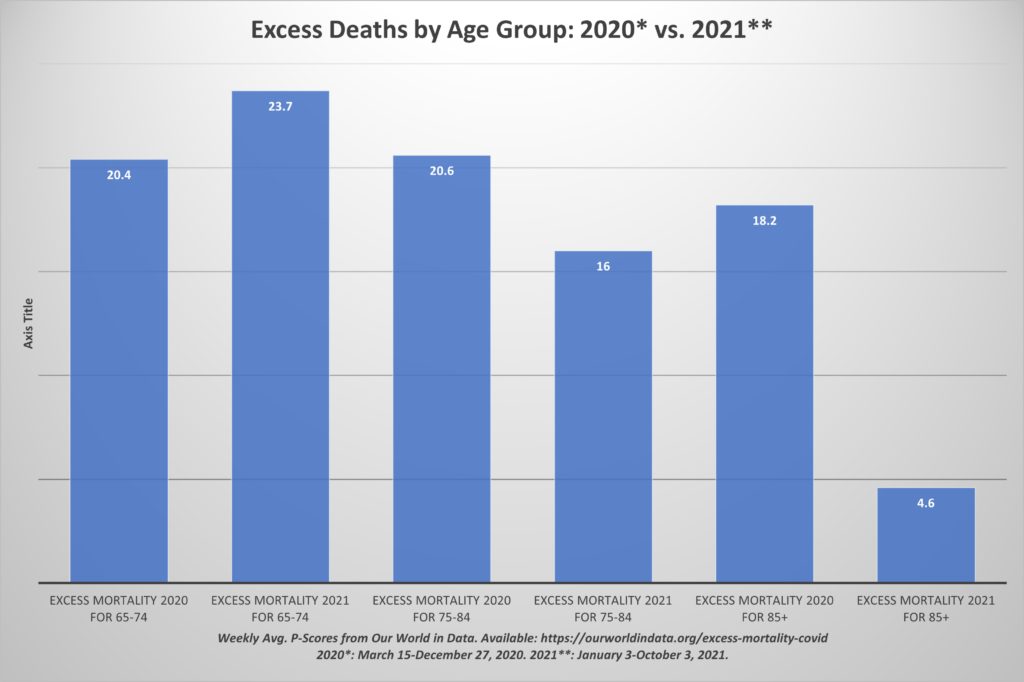 Thus, this study is not to say that mRNA prophylactic therapeutic drugs, which would not historically be called “vaccines” since they do not stop infection or substantially reduce the spread, have no utility for individual patient cases. The Covid therapeutic drugs being marketed as “vaccines” may have benefit to certain at-risk populations, such as the elderly.

However, this is a far cry from vaccine mandates and the one-size-fits all policies being advocated under the failing Public Health Expert model.

Biden’s Vaccine Mandate Suffers Another Devastating Blow: ‘This Unlawful Mandate is Now Blocked in All 50 States’