Speaker Pelosi made an extraordinary move and appointed a general to preside over a ‘9/11-style’ commission to purportedly ‘get to the bottom’ of the January 6th Capitol riots. The bold action came as Pelosi was facing heat over her knowledge and decisions about the Capitol riots’ planning prior to the attack on the Congress.

The general that Pelosi has hand-picked for her mission to point the finger at Donald Trump for the planned attack is Lt. General Russel Honoré. It now appears that Honoré is a partisan appointment, as he not only had blasted Missouri Senator Josh Hawley for objecting to 2020 election results, but littered severe anti-Trump posts along a now-deleted Twitter timeline. The evidence comes in the form of screenshots of now-deleted Twitter posts.

“That little peace of shit with his @Yale law degree should be run out of DC and Disbarred ASAP,” Lt. General Russel Honoré said about Hawley on Twitter on January 11.

Becker News has unearthed even more tweets that point to the general’s extreme partisanship.

(Note: Honoré’s timeline appears to be deleted before December 28, 2020. The following tweets are from November.)

The general told then-President Trump to “stop the bull shit.” 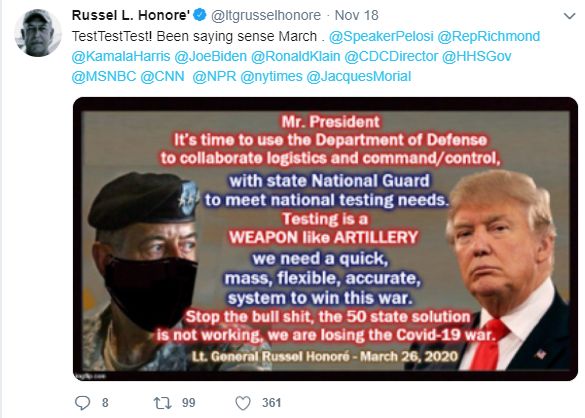 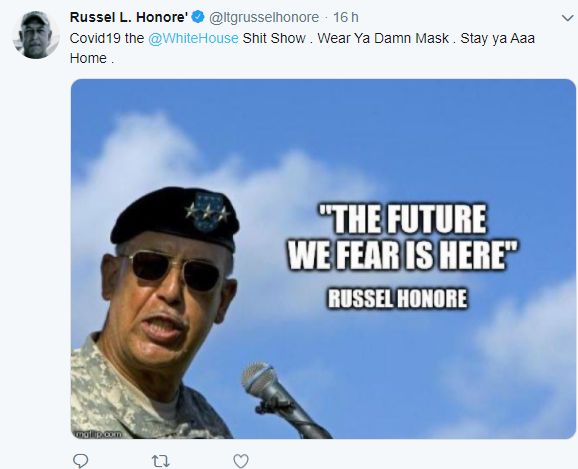 He retweeted a tweet condemning the former president’s legal and constitution election contestation as “an attempt to cling to power” that is “likely to do lasting harm to democracy.”

As well as caricatures of Donald Trump: 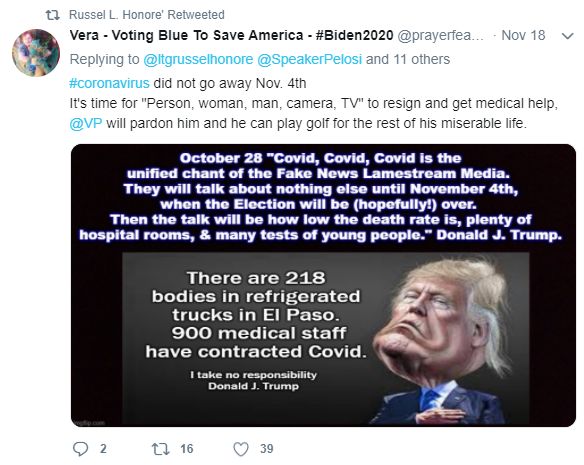 One interesting non-deleted tweet is one of the late Rush Limbaugh. It is merely an out-of-context quote: “So, Trump is just throwing gasoline on a fire here. And he’s having fun watching the flames.”

The Kansas City Star reported on the general’s deleted social media post about Hawley and pointed out his background.

“Honoré is best known for leading the military’s response to Hurricane Katrina in 2005,” the Star reported. “Pelosi touted him as ‘a respected leader with experience dealing with crises’ when she announced his selection last month.”

“General Honoré is an extreme partisan and should be the LAST person to head up an investigation of what happened at the Capitol on Jan 6th,” said Sen. Ron Johnson.

Pelosi spokesman Drew Hammill downplayed the clear signs of partisanship in a statement: “General Honoré is committed public servant whose name is synonymous with integrity and professionalism,

“His efforts to review the U.S. Capitol’s security infrastructure, interagency processes and procedures, and command and control have included seeking bipartisan input in order to achieve its mission,” Hammill added. “There is no room for partisanship in the Speaker’s efforts to make the U.S. Capitol a safe place for staff, workers, press and Members.”

It that were the case, Honoré never would have been appointed. A truly independent bi-cameral investigation should be appointed and not a witch hunt to re-litigate the failed impeachment effort presided over by a hand-picked partisan.

NOW READ: Speaker Pelosi Was Just Served Notice on Capitol Riots’ Plans & What She Knew About It