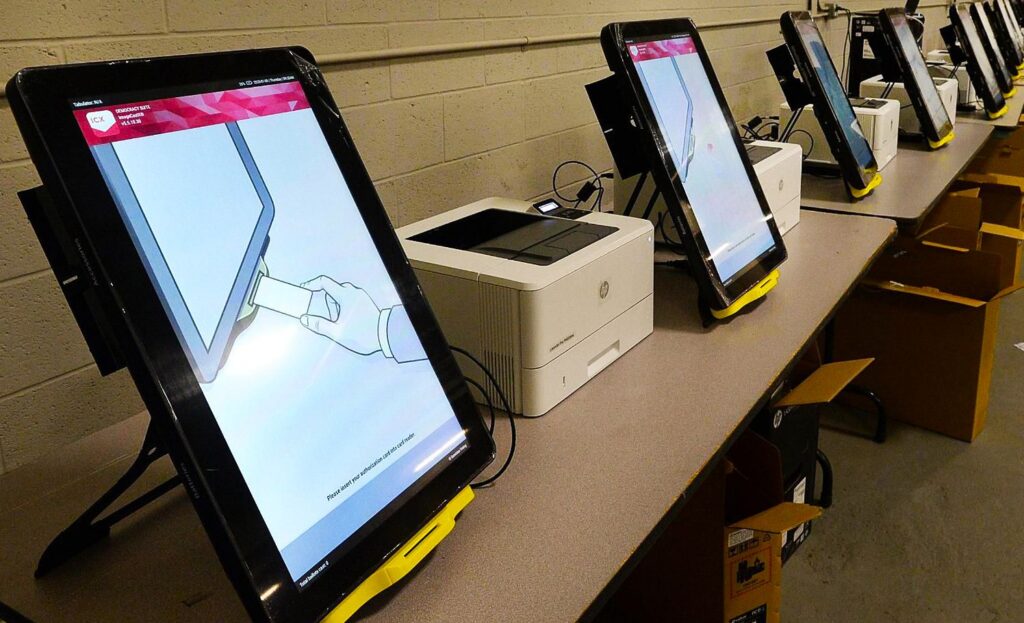 Georgia’s elections controversy is being taken to new levels with the revelation that a 25,000-word “secret report” on its voting systems vulnerabilities may soon be released.

The security flaws in Georgia’s election system was uncovered by a professor who specializes in election integrity. A judge may soon make the findings public.

“The vulnerability was first alleged in sealed court documents in July by Alex Halderman, a computer science professor at the University of Michigan,” the Atlanta Journal Constitution reported. “As an expert for plaintiffs in the election security lawsuit, Halderman gained access to Georgia voting equipment for 12 weeks and produced a 25,000-word secret report.”

“Halderman found that malicious software could be installed on voting touchscreens so that votes are changed in QR codes printed on paper ballots, which are then scanned to record votes, according to court documents,” the report continued. “QR codes aren’t readable by the human eye, and voters have no way to know whether they match the printed text of their choices.”

“The vulnerability could be exploited by someone with physical access to a voting touchscreen, such as a voter in a polling place, or by an attacker who used election management system computers,” the report added, citing Halderman. “A hacker in a polling place could only target one touchscreen at a time, limiting the number of votes that could be changed, but an attack on election management systems could have a broader impact.”

“It is important to recognize the possibility that nefarious actors already have discovered the same problems I detail in my report and are preparing to exploit them in future elections,” Halderman wrote in a September declaration. Halderman added that he found no concrete evidence that Dominion voting machines changed votes in the 2020 election.

Raffensperger claimed that Professor Halderman is nothing more than a partisan critic of Georgia’s voting systems.  The Secretary of State repeated his refrain that voting in Georgia ‘is more secure than ever because of audits, voter ID requirements and a ban on collecting and returning multiple absentee ballots.’

A judge is now mulling whether or not to release a redacted version of the 25,000-word “secret report” to the public as part of an election integrity lawsuit.

“He should immediately gather all relevant information regarding this report, thoroughly vet its findings, and assure Georgians he is doing everything possible to ensure the system, procedures and equipment are completely secure,” Katie Byrd, a spokeswoman for Kemp, said Wednesday.

On Thursday, Secretary of State Raffensperger called on Halderman to request that the judge release his findings on Georgia’s election system and his pre-2020 election testimony.

“Halderman was given full access to Georgia’s election system by the judge, the equivalent of having the keys and alarm codes to a home then claiming he found a way to break in,” Raffensperger said. “The public deserves to know the context of J. Alex Halderman’s claims and his testimony regarding the 2020 election. We are taking on these claims in court, and we will win. Sensationalized media articles and misleading reports from paid activists notwithstanding, Georgia’s election system is safe and secure.”

“The ‘secret report’ referenced by the Atlanta Journal-Constitution today is not an objective, academic study by a non-biased actor,” his office added. “It is assertions by an individual who is paid to espouse opinions supporting the elimination of electronic voting systems to help a lawsuit brought by liberal activists, including one funded by Stacey Abrams’ Fair Fight Action.”

Professor Halderman argues that a paper-based voting system with ballots filled out by hand, instead of ballots printed by computers, would be more secure. His testimony was actually sought out by radical partisan actors, including those connected to failed gubernatorial candidate Stacey Abrams and her group Fair Fight Action.

In case you’ve lost count, there are at least eight lawsuits that argue parts of Georgia’s new law are ‘discriminatory and unconstitutional,’ according to PBS:

“All the cases are assigned to Trump-appointed Judge J.P. Boulee, and almost all of them argue that many of the sweeping changes made to Georgia’s election administration disproportionately negatively affect nonwhite voters,” NPR noted.

There is currently a lawsuit in Georgia to force the state to jettison its $138 million voting system to go to an election system that uses paper ballots filled out by hand, which is potentially a bipartisan position. Raffensperger has consistently argued that Georgia’s elections are accurate, secure, and beyond reproach. Election integrity advocates pressed Georgia Secretary of State Brad Raffensperger, who is running again for office in 2022, to take the issue seriously.

“It’s really concerning that the Georgia secretary of state and Dominion are kind of putting their head in the sand,” said Susan Greenhalgh, an election security consultant for the plaintiffs suing Georgia over its election system. “Common sense would say you would want to be able to evaluate the claims and then take appropriate action, and they’re not doing any of that.”

The release of the 2020 Georgia election “secret report” threatens to change all that.