Dr. Fauci Fires Back at Elon Musk Over His Calls to ‘Prosecute Fauci’

Dr. Anthony Fauci bristled at Elon Musk’s calls to ‘Prosecute/Fauci’ in an interview with Neil Cavuto on Fox News. Watch:

“You know, no less than Elon Musk he said he has released the so-called ‘Fauci Files’ talking about how the government and Twitter, for example, work closely to share messages on how you particularly were dealing or telling the public about the virus,” Cavuto said. “He went on to say, my pronouns are ‘hashtag Fauci’ [sic]. And I’m just wondering what you made of the world’s richest man or second richest now going after you.”

“I have no idea what he’s talking about, Neil,” Fauci claimed. “I wish I did. I mean, I’m clueless about what he’s referring to. He’s talking about the Fauci Files was supposed to come out last week. We’re now at the end of this week. I just don’t understand what he’s doing. And don’t even think I should be addressing it because it’s a bit puzzling to me.”

“So when he says to ‘prosecute Fauci’ that you were a little too cozy working in cahoots with Twitter and the government to provide a general response to all of this,” Cavuto said. “But he’s never released details of that. I don’t know if that’s forthcoming, but it’s very similar to the kind of things Rand Paul has said about you in the United States Senate. Some of these House Republican members who said, you made a bad situation worse. You’re quite right to point out that at the time you were talking about this, we were losing hundreds of thousands of people a day in a week. But they pay no heed to that. And I’m just wondering how you feel about that, because that could drag on a while, these hearings and studies and investigations down to this Wuhan lab in China. It could drag on a long time.”

“Yeah, it could,” Fauci said. “And what will be, will be. Like I said Neil, and I’ll repeat it again, I have a great deal of respect for the process of oversight. I have absolutely nothing to hide at all. I’ll be able to defend everything that I’ve done.”

Dr. Fauci claims that he had nothing to do with Twitter. However, it came out in the Big Tech censorship case brought by the State of Missouri and State of Louisiana that Fauci’s own daughter worked for Twitter.

Attorney D. John Sauer asked Fauci if he knew anyone that worked for social media companies, to which Fauci stated, “Well, I’ve had communications with Mark Zuckerberg in the past who was — I’ve done, I believe, three outward FaceTime discussions encouraging people to get vaccinated.” 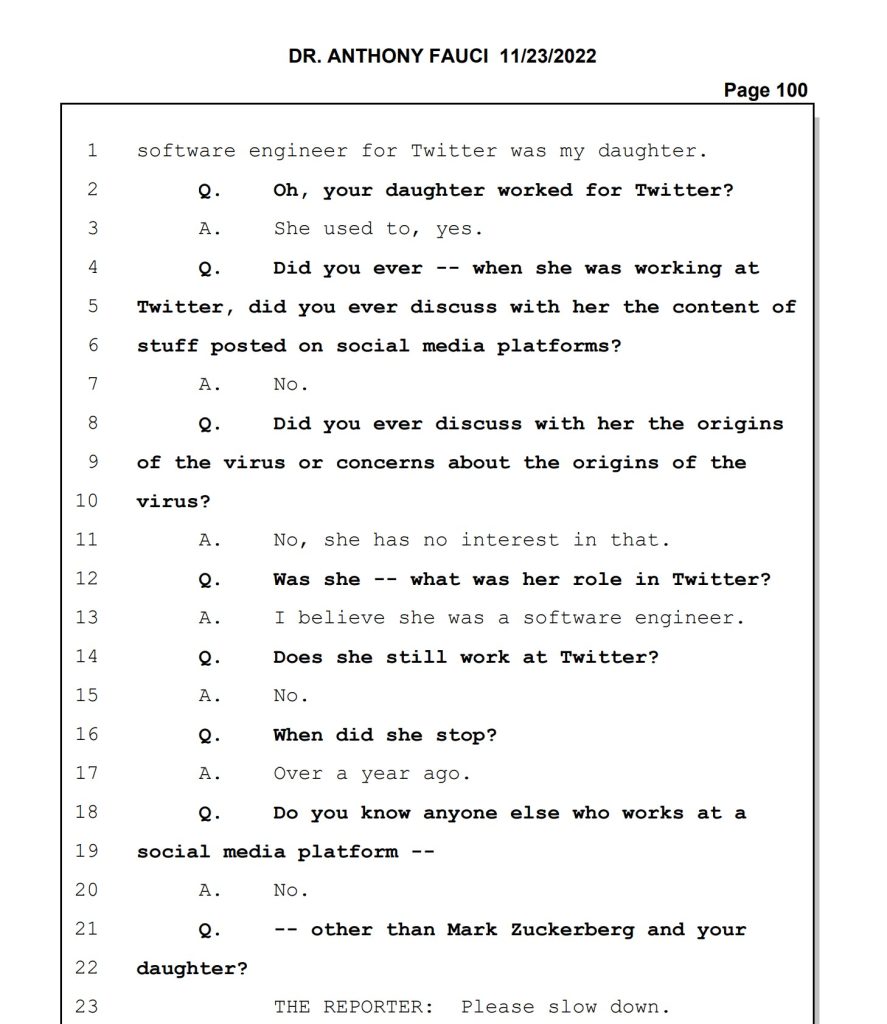 “Do you have acquaintances, people that you know, who work on social media platforms?” Sauer questioned.

“Well, a person who used to work as a software engineer for Twitter was my daughter,” said Fauci.

“Did you ever — when she was working at Twitter, did you ever discuss with her the content of stuff posted on social media platforms?” Sauer asked, to which Fauci said no.

“No, she has no interest in that,” said Fauci, who also said that she stopped working for the platform “over a year ago.”

In December, Elon Musk tweeted that “My pronouns are Prosecute/Fauci,” which went megaviral.

More recently, he divulged that Fauci had quite the fan club on Twitter before he cleaned house.

“Almost no one seems to realize that the head of bioethics at NIH – the person who is supposed to make sure that Fauci behaves ethically – is his wife,” Musk remarked.

“‘Gain-of-function’ in this context is just another way of saying ‘bioweapon’,” Musk added. “Some good nuggets in article. Important to note that Fauci authored 2012 paper arguing for gain-of-function research! Obama wisely put this on pause, but Fauci restarted it.”

America is still awaiting the full release of the Fauci Files. It may be that Musk is waiting for a prime opportunity, but Fauci has thrown down the gauntlet. It’s time for Elon Musk to respond in kind.

Elon Musk Says He Is ‘Open’ to Idea of Buying Out Major Media Companies, Drops Another ‘Fauci Bomb’