Fauci Reacts to Shanghai’s Horrific Lockdowns: ‘You Use Lockdowns to Get People Vaccinated’ 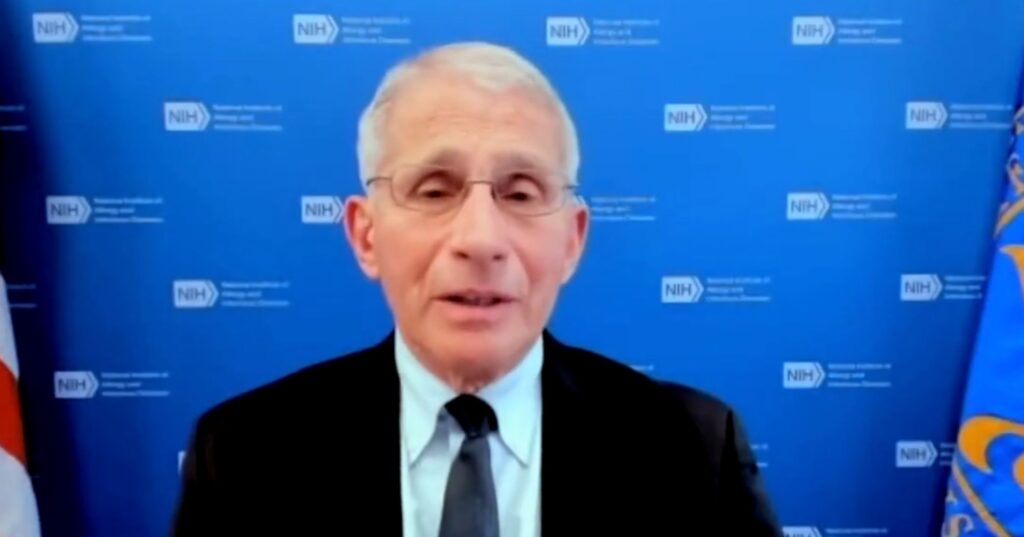 Dr. Anthony Fauci, the Biden administration’s top Covid doctor, appeared on MSNBC on Thursday and had a confession for the American people.

Remember those lockdowns that forced people to miss funerals of loved ones, made millions of children miss school, and caused thousands of businesses to shutter their doors forever? Those were to force people to get vaccinated, according to Fauci himself. Watch:

“How concerning is the outbreak in China?” Andrea Mitchell asked. “We see the lockdown in Shanghai and the State Department now ordering families out, all non-essential workers out of Shanghai?”

“China has a number of problems, two of which are that their complete lockdown, which was their approach, the strictest lockdown that you’d never be able to implement in the United States,” Fauci said. “Although that prevents the spread of infection, I remember early on they were saying, and I think accurately, they were doing better than almost anybody else.”

The Communist Chinese Party misrepresents its Covid data. Fauci knows this. Of course, this is the same fraud who funded the Wuhan laboratory’s gain-of-function research, lied about it repeatedly to Congress, and boasted of collaborating with Chinese communist scientists. So, it’s not surprise that he wouldn’t shoot straight with the American people on the matter.

“But lockdown has its consequences,” Fauci went on. “You use lockdowns to get people vaccinated so that when you open up, you won’t have a surge of infections.”

This is utter nonsense on multiple levels. First of all, the Covid vaccines in the United States do not stop the spread of Covid-19. Secondly, lockdowns do next-to-nothing to stop infections or deaths in the long run. Third, it is unethical for ‘public health officials’ to coerce people to make personal health decisions against their will.

“The problem is, that the vaccines that they’ve been using are not nearly as effective as the vaccines that are used in the United States, the UK, [the] EU, and other places,” he continued. “So, they don’t have the degree of protection that’s optimal.”

Dr. Fauci has continued to insist that repressive ‘lockdown’ measures work, although he distanced himself from that term. He was confronted in late March on a BBC show about whether the lockdowns were too ‘severe.’ Watch:

“I’m interested in your reluctance to use the word ‘lockdown’,” the BBC interviewer said. “Do you think two years on that they were worth it or were they too severe?”

“You know, I don’t think we’re ever going to be able to determine what the right balance is,” Fauci claimed. “I think ‘restrictions,’ if you want to use that word, which I tend to shy away from ‘lockdown,’ they certainly prevented a lot of infections, prevent a lot of hospitalizations, and prevented a lot of deaths,” he claimed without providing evidence.

“Obviously, when you do have that kind of restriction on society, there are unintended negative consequences, particularly in children who are not allowed to go to school in the psychological and mental health aspects that it has on children, in the economic stress that it puts on society in general, on individual families,” he conceded. “Obviously those are negative consequences that are unintended.”

It cannot be called “unintended” when a public health official ignores implicit policy tradeoffs, such as those that come with ‘lockdowns.’ Economic dislocation, disruption to schooling, and negative social ramifications are inherent in the policy.

The videos out of Shanghai really drive home the effect of the “lockdown” policies: State imprisonment of a population and ensuing desperation.

What the?? This video taken yesterday in Shanghai, China, by the father of a close friend of mine. She verified its authenticity: People screaming out of their windows after a week of total lockdown, no leaving your apartment for any reason. pic.twitter.com/iHGOO8D8Cz

🇨🇳☠️ Disturbing footage! Suicide due to lockdowns is fast becoming the new normal in China. The Chinese Communist Party is trying to censor these videos.

In China children taken away from their parents,
People locked in camps and now the Zero COVID policy in Shanghai is also affecting pets,
The authorities have taken extreme measures and they're killing cats and dogs.

Imagine still believing this is all about your health🤦‍♂️ pic.twitter.com/AL4HMr3pF6

We can't turn a blind eye to what's happening right now in China. We have a special guest from Shanghai coming on the show tomorrow to talk about the despotic Chinese regime, but we can't share his identity, or he might end up like this person… or worse.pic.twitter.com/WUnRaGx33S

Here come the ‘health and safety’ stormtroopers in Shanghai. It’s for your own good, apparently. pic.twitter.com/OL0IT5GxvM

The question is whether the lockdowns were for fighting Covid or for authoritarian social conditioning. There is mounting evidence Dr. Fauci imported his ‘lockdown’ model from communist China.

Dr. Anthony Fauci has a long history of collaboration with communist Chinese officials, particularly in regards to the NIAID’s funding of the Wuhan laboratory through EcoHealth Alliance.

In a video posted by the University of Edinburgh last March, Dr. Anthony Fauci appeared with Dr. Zhong Nanshan, known to many as “China’s Fauci.’ At the virtual panel, Dr. Zhong responded to a question from Dr. Anthony Fauci that elicited his advocacy of “strict” lockdowns.

“But if one does it too quickly, and as Dr. Zhong has mentioned what I often say, ‘jump the gun’ or do it too quickly, what happens is that you can get a resurgence of infection,” Dr. Fauci continued. “So the question is, what is the right balance of continuing to put stringent public health measures at the same time as you gradually open up the economy and open up the country.”

But in May 2020, Fauci warned of “irreparable damage” from extended lockdowns.

“We can’t stay locked down for such a considerable period of time that you might do irreparable damage and have unintended consequences, including consequences for health,” Fauci said in a CNBC interview.

Despite knowing that extended lockdowns can cause ‘irreparable damage’ to a nation, he has nonetheless advocated for them repeatedly, while ignoring numerous studies showing they are futile at lowering excess mortality rates.

The United States’ Covid policy responses that include quarantining, masks, and social distancing, as well as the ‘lockdowns,’ have failed to produce statistically significant results fighting Covid, but have wrought serious damage to the economy and violated countless Americans’ rights.

“Lockdowns in the U.S. and Europe had little or no impact in reducing deaths from COVID-19, according to a new analysis by researchers at Johns Hopkins University,” the Washington Times reported.  “The lockdowns during the early phase of the pandemic in 2020 reduced COVID-19 mortality by about 0.2%, said the broad review of multiple scientific studies.”

“We find no evidence that lockdowns, school closures, border closures, and limiting gatherings have had a noticeable effect on COVID-19 mortality,” the researchers wrote.

“Overall, we conclude that lockdowns are not an effective way of reducing mortality rates during a pandemic, at least not during the first wave of the COVID-19 pandemic,” the authors conclude. “Our results are in line with the World Health Organization Writing Group (2006), who state, “Reports from the 1918 influenza pandemic indicate that social-distancing measures did not stop or appear to dramatically reduce transmission.”

“The use of lockdowns is a unique feature of the COVID-19 pandemic,” the authors added. “Lockdowns have not been used to such a large extent during any of the pandemics of the past century. However, lockdowns during the initial phase of the COVID-19 pandemic have had devastating effects. They have contributed to reducing economic activity, raising unemployment, reducing schooling, causing political unrest, contributing to domestic violence, and undermining liberal democracy. These costs to society must be compared to the benefits of lockdowns, which our meta-analysis has shown are marginal at best. Such a standard benefit-cost calculation leads to a strong conclusion: lockdowns should be rejected out of hand as a pandemic policy instrument.”

The COVID lockdowns will cause damage to the United States for many years to come, including a lasting toll on economic vitality, public health, and in terms of human lives.  Such is the conclusion of a number of recent academic studies, including those conducted by researchers at the RAND corporation, the National Bureau of Economic Research, and the National Academy of Sciences.

“The huge collateral damage of lockdowns is becoming clear. Global unemployment has spiked. Hundreds of millions of children have missed school, often for months. Families have been kept apart. And much of the damage is still to come,” The Economist noted.

Lockdowns may end up killing children for years to come due to the ensuing global economic contraction, particularly in poor counties, NBER research also found. Its study was discussed at the Washington Times.

“[I]n poor countries, where the population is relatively young, the economic contraction associated with lockdowns could potentially lead to 1.76 children’s lives being lost for every covid-19 fatality averted, probably because wellbeing suffers as incomes decline,” the Washington Times summarized.

“What is less clear is whether the lockdowns served any useful medical purpose,” the Times notes. “Fortunately, two researchers at the RAND Corporation and two researchers from the University of Southern California have done an analysis of the medical value of the lockdowns (which they refer to as ‘sheltering in place,’ or SIP, policies). They looked at 43 countries and all of the states in the union, and published their assessment in June as a working paper of the National Bureau for Economic Research.”

“[W]e fail to find that SIP policies saved lives,” NBER stated in blunt terms. “To the contrary, we find a positive association between SIP [Shelter-in-Place] policies and excess deaths. We find that following the implementation of SIP policies, excess mortality increases.”

“So, the lockdowns didn’t reduce the number of deaths, failed to prevent any excess deaths, and in fact resulted in increased deaths,” the authors concluded. A Lancet study has largely echoed those findings.

Thus, Dr. Fauci’s argument that lockdowns save lives is completely devoid of evidentiary basis or scientific merit. On the contrary, the preponderence of evidence points to lockdowns causing more deaths than they save.

It is also important to remember that China has nearly universal masking, but this has done nothing to prevent an explosion of reported cases in both Hong Kong and Shanghai in the last month. Reuters’ reporting on Shanghai’s viral outbreak bears reading for a demonstration of China’s utterly futile draconian policies.

“Shanghai is battling China’s worst COVID-19 outbreak since the virus first emerged in Wuhan in late 2019, with its 25 million residents remaining largely under lockdown, though restrictions were partially eased in some areas this week,” the report added.

China was once held up as the model of the world. Now, it is clear that the communists’ solutions have spread misery and hardship, while merely delaying the inevitable.