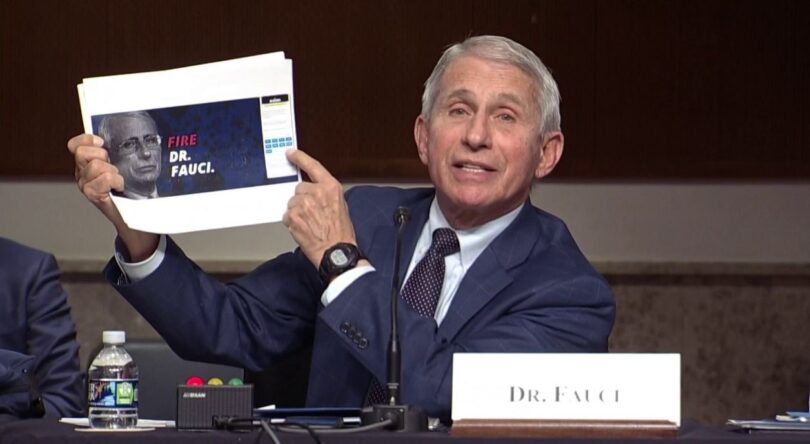 Dr. Anthony Fauci has issued a warning to the world: We’re only in “phase one” in a purported five phases of the Covid-19 pandemic.

While appeared virtually at the World Economic Forum, Biden’s top Covid adviser was asked if the SARS-CoV-2 virus would become endemic in 2022. Fauci argued it’s too early to tell and the world appears to be in phase one of a five-phase pandemic, The New York Times reported.

“Dr. Fauci also said that the world is still in the first of what he considered to be the five phases of the pandemic. The first is the ‘truly pandemic’ phase, ‘where the whole world is really very negatively impacted,’ followed by deceleration, control, elimination and eradication,” The Times reported.

Fauci added that “it is an open question as to whether or not Omicron is going to be the live virus vaccination that everyone is hoping for, because you have such a great deal of variability with new variants emerging.”

“I would hope that that’s the case,” Fauci said, “but that would only be the case if we don’t get another variant that eludes the immune response.”

This is a response that many people around the world are dreading: Whenever the Covid-19 pandemic appears to be beat, a new “variant” suddenly springs up that seemingly baffles the medical community.

Also appearing at Davos, Fauci complained about “misinformation” being spread about the coronavirus.

“One of the things the entire world is facing, but we certainly are facing it in a very, very disconcerting way in the United States is the amount of disinformation that is accompanying what should be a problem that everyone pulls together against a common enemy, which is the virus,” he said. “We have disinformation that is entirely destructive to a comprehensive public health endeavor.”

However, it would be remiss not to point out that Fauci has been repeatedly guilty of spreading falsehoods about the Covid pandemic.

Dr. Fauci, who is America’s highest-paid civil servant, also expressed his hope for a “new normal” in political terms.

“Omicron is highly transmissible, but apparently not very pathogenic,” Fauci said at the WEF virtual forum. “While I hope that remains the case, but that would depend on what new variants emerge going forward.”

“It is very difficult to predict what the new normal would be like,” he added. “I do not think the people would be walking around with masks on forever, but one new normal I would hope for is greater solidarity with each other. I also hope the new normal would include a strong memory about what a pandemic can do to us,” he continued.

An article in Cell in 2020 co-authored by Dr. Anthony Fauci and David M. Morens published may be as revealing as many of his many public statements.

Then it gives a prescription for creating a less pandemic-stricken world: “Radical changes that may take decades to achieve.”

“Living in greater harmony with nature will require changes in human behavior as well as other radical changes that may take decades to achieve: rebuilding the infrastructures of human existence, from cities to homes to workplaces, to water and sewer systems, to recreational and gatherings venues,” Fauci argues. “In such a transformation we will need to prioritize changes in those human behaviors that constitute risks for the emergence of infectious diseases.”

“Chief among them are reducing crowding at home, work, and in public places as well as minimizing environmental perturbations such as deforestation, intense urbanization, and intensive animal farming,” the article says. “Equally important are ending global poverty, improving sanitation and hygiene, and reducing unsafe exposure to animals, so that humans and potential human pathogens have limited opportunities for contact.”

It turns out that such “radical changes” to America and the rest of the world’s politics is going to take more than one “phase.” Normalization, the way that global elites like Fauci define it, apparently is going to take at least five.