Fauci Under Fire for Cruel Experiments on ‘Sick Puppies’: Dogs’ Heads Locked in Cages with Flesh-Eating Parasites for ‘Science’ 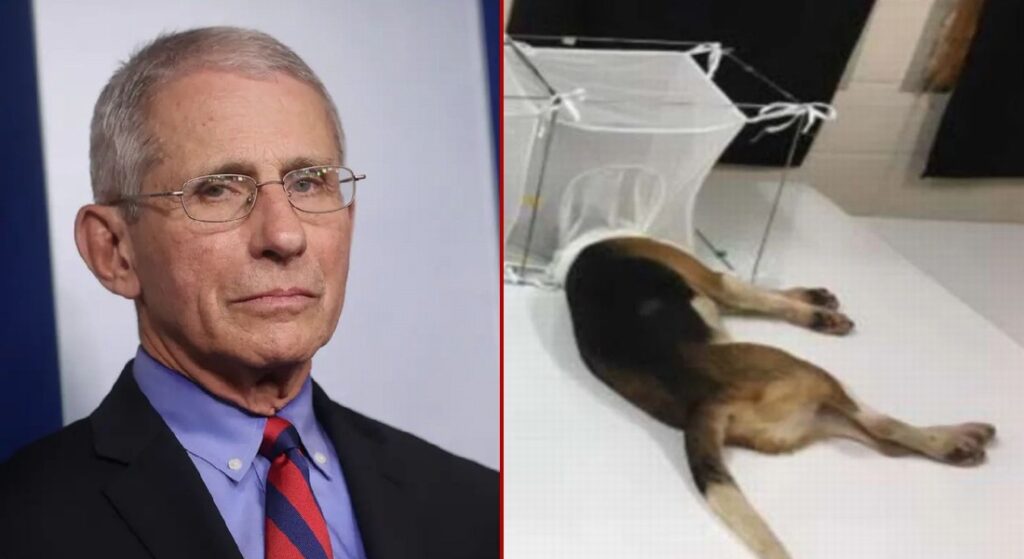 The National Institute for Allergy and Infectious Diseases, led by Dr. Anthony Fauci, funded cruel experiments on dogs as young as six months old in order to test anti-parasitic treatments, according to a letter signed by 24 lawmakers. The experiments, conducted in Tunisia, deliberately infected dozens of beagles with disease-causing parasites to test an experimental drug. The heinous, ethically dubious experiments were funded by Dr. Fauci’s division at the National Institutes of Health, the non-profit group White Coat Waste Project found in its investigation.

“Our investigators show that Fauci’s NIH division shipped part of a $375,800 grant to a lab in Tunisia to drug beagles and lock their heads in mesh cages filled with hungry sand flies so that the insects could eat them alive,” White Coat Waste told Changing America. “They also locked beagles alone in cages in the desert overnight for nine consecutive nights to use them as bait to attract infectious sand flies.”

“White Coat Waste claims that 44 beagle puppies were used in a Tunisia, North Africa, laboratory, and some of the dogs had their vocal cords removed, allegedly so scientists could work without incessant barking,” Changing America learned. “According to the White Coat Waste Project, the Food and Drug Administration does not require drugs to be tested on dogs, so the group is asking why the need for such testing.”

A bi-partisan letter spearheaded by Rep. Nancy Mace (R-S.C.) was sent to the National Institutes of Health (NIH) objecting that the cordectomies were a ‘cruel’ and a ‘reprehensible misuse of taxpayer funds’.”

“We write with grave concerns about reports of costly, cruel, and unnecessary taxpayer-funded experiments on dogs commissioned by National Institute of Allergy and Infectious Diseases,” the lawmakers wrote.

“The dogs were all between six and eight months old. The commissioned tests involved injecting and force-feeding the puppies an experimental drug for several weeks, before killing and dissecting them,” it continued.

“Of particular concern is the fact that the invoice to NIAID included a line item for ‘cordectomy.’ As you are likely aware, a cordectomy, also known as ‘devocalization,’ involves slitting a dog’s vocal cords in order to prevent them from barking, howling, or crying,” the letter went on.

“This cruel procedure – which is opposed with rare exceptions by the American Veterinary Medical Association, the American Animal Hospital Association, and others – seems to have been performed so that experimenters would not have to listen to the pained cries of the beagle puppies. This is a reprehensible misuse of taxpayer funds,” the lawmakers said.

The House members that sent the letter want Dr. Fauci to explain himself in response to the allegations in the White Coat Waste Project’s report. On Thursday, it was reported that the National Institutes of Health acknowledged that the NIAID funded risky gain-0f-function research at the Wuhan Institute of Virology. While the NIH denied that the research can be tied to the SARS-CoV-2 virus that originated in Wuhan, China, the health agency acknowledged that the banned gain-of-function research was conducted with U.S. taxpayer money. The admission was noted by Rutgers’ Professor of Chemistry and Chemical Biology Richard H. Ebright.

“NIH corrects untruthful assertions by NIH Director Collins and NIAID Director Fauci that NIH had not funded gain-of-function research in Wuhan,” Professor Ebright notes. “NIH states that EcoHealth Alliance violated Terms and Conditions of NIH grant AI110964.” Ebright points out that NIH knew about the documents in 2018 and reviewed them repeatedly.

“The NIH received the relevant documents in 2018 and reviewed the documents in 2020 and again in 2021,” Ebright said. “The NIH–specifically, Collins, Fauci, and Tabak–lied to Congress, lied to the press, and lied to the public. Knowingly. Willfully. Brazenly.”

The National Institutes of Health has thus been found to have conducted and funded illegal and unethical biomedical research. Furthermore, it is now apparent beyond a shadow of a doubt that Dr. Anthony Fauci lied to Congress about it.

Dr. Anthony Fauci is currently the leading face of the nation’s coronavirus pandemic response, which has led to immoral and unlawful policies carried out against U.S. citizens. It is time that someone answer for these policies. Full and thorough accountability should start with Dr. Anthony Fauci.