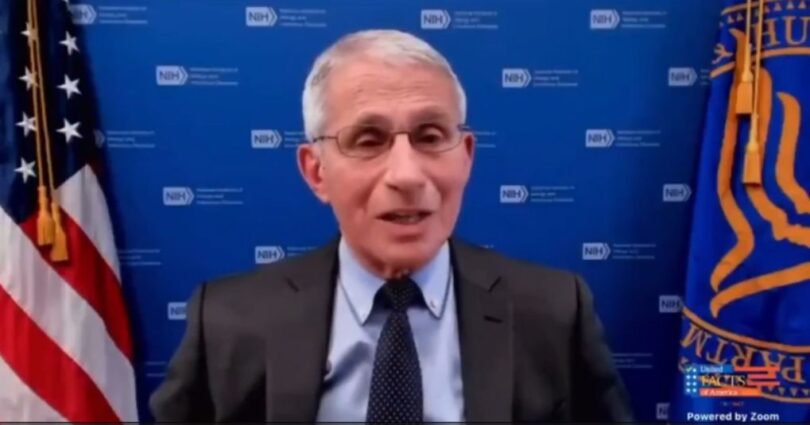 Dr. Anthony Fauci has been all over the map on Covid recently. He’s almost getting as bad as Biden.

On Monday, he blurted out the ugly truth about his collaboration with the CCP on his “subcontract of a grant” investigating coronaviruses in the communist country.

“CoV-1 clearly originated in China, and we were fortunate to escape a major pandemic,” he said. “So, we really had to learn a lot more about the viruses that were there, about whether or not people were getting infected with that viruses.”

“So in a very minor collaboration as part of a subcontract of a grant we had a collaboration with some Chinese Comm — Chinese scientists. And — and what he conflated that is that, therefore, we were involved in creating the virus, which is the most ridiculous, majestic leap I’ve ever heard of.”

The expression on the doctor’s face is priceless. Watch the “Faucian slip” below:

Fauci’s collaboration with Chinese commu–scientists is ostensibly more than on the matter of coronavirus detection, prevention, and gain-of-function research.

An article co-authored by Anthony Fauci and David M. Morens published in Cell is proving to be as revealing as any of his many public statements.

“Living in greater harmony with nature will require changes in human behavior as well as other radical changes that may take decades to achieve: rebuilding the infrastructures of human existence, from cities to homes to workplaces, to water and sewer systems, to recreational and gatherings venues,” Fauci argues. “In such a transformation we will need to prioritize changes in those human behaviors that constitute risks for the emergence of infectious diseases.”

“Chief among them are reducing crowding at home, work, and in public places as well as minimizing environmental perturbations such as deforestation, intense urbanization, and intensive animal farming,” the article goes on. “Equally important are ending global poverty, improving sanitation and hygiene, and reducing unsafe exposure to animals, so that humans and potential human pathogens have limited opportunities for contact.”

In March 2021, Fauci appeared on a virtual panel with a longtime Chinese Communist Party member, Dr. Zhong Nanshan, which was hosted by the University of Edinburgh.

Although the video was posted by the University of Edinburgh in early March, it has received relatively little attention, despite the public health experts’ advocacy for ‘strict’ lockdowns extending 2-3 years and global mass vaccinations.

Dr. Zhong, who is often looked at as “China’s Fauci,” is a pulmonary specialist and a long-time Communist Party member.

“Zhong has a long career in the Chinese Communist Party hierarchy, having served for years in delegatory positions in both the CCP’s National Congress and its National People’s Congress,” Just the News noted. “He has also served on numerous state research initiatives and is the founder of the state-funded Guangzhou Institute of Respiratory Diseases.”

“On the panel, Fauci and Zhong both expressed hopes that COVID-19 restrictions worldwide would continue well into the future,” the reported continued. “Zhong argued that ‘mass vaccinations’ are the ‘commonsense’ approach to engendering herd immunity in the population, but ‘to do that … will take about two or three years time with global collaboration.’”

Dr. Fauci would echo those sentiments in an exchange between the public health counterparts. At the University of Edinburgh’s virtual panel, Dr. Zhong responded to a question from Dr. Anthony Fauci that elicited his advocacy of “strict” lockdowns.

“But if one does it too quickly, and as Dr. Zhong has mentioned what I often say, ‘jump the gun’ or do it too quickly, what happens is that you can get a resurgence of infection,” Dr. Fauci continued. “So the question is, what is the right balance of continuing to put stringent public health measures at the same time as you gradually open up the economy and open up the country.”

Dr. Anthony Fauci also pressed his rationale that “variants” would force a demand for vaccinations and a need for continued lockdowns.

“It is important to realize,” Fauci claimed, “that variants arise, and if you suppress the virus in one country, but it is allowed to spread uninhibited in other areas of the world, sooner or later, the variants, the new lineages, the mutants, will come back and rekindle the outbreak, even in countries that seem to have it under control. So we still have a considerable amount of task in front of us.”

Dr. Fauci and Dr. Zhong also brought to light that there are massive psychological issues with maintaining lockdowns for extended periods of time. It is unclear if the Chinese commu-scientists consider that to be a bug or a feature.

Rand Paul Warns Fauci About Lying, Then Lights Him Up Over Funding Wuhan ‘Gain of Function’ Research