The FBI’s raid on Donald Trump’s Mar-a-Lago estate was directly approved and overseen by Justice Department officials with deep ties to Russiagate.

According to a report from investigative journalist Paul Sperry, the FBI agents and officials involved are also under investigation for potential criminal wrongdoing in the Durham probe.

“Developing: Sources say the FBI agents and officials who were involved in the raid on former President Trump’s home work in the same Counterintelligence Division of the FBI that investigated Trump in the Russiagate hoax and are actively under criminal investigation by Special Counsel John Durham for potentially abusing their power investigating Trump in the Russian fraud and therefore have a potential conflict of interest and should have been RECUSED from participating in this supposed ‘espionage’ investigation at Mar-a-Lago,” Sperry said in a social media post on Saturday. 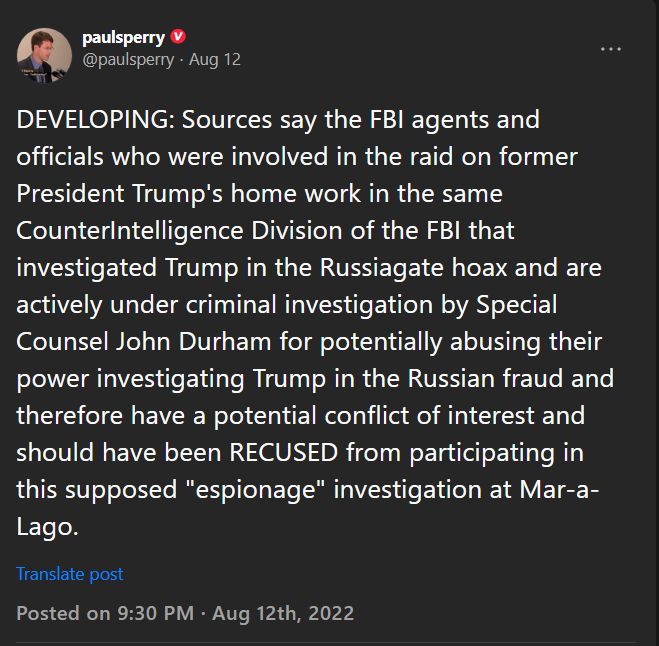 Paul Sperry noted the “conflicted” DOJ officials who were briefed on the FBI’s raid of Mar-a-Lago. 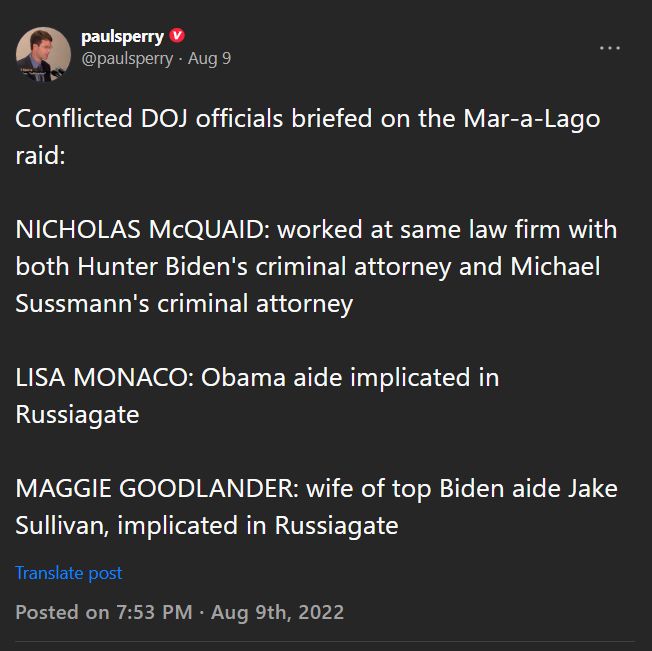 In a review of conflicts of interest and political bias at the Department of Justice, Sen. Chuck Grassley (R-IA) and Sen. Ron Johnson (R-WI) explicitly listed Nicholas McQuaid as an official of concern.

“As part of their conflicts of interest review, on February 3, 2021, and March 9, 2021, the senators also wrote to the Justice Department about the hiring of Nicholas McQuaid as Acting Assistant Attorney General for the Criminal Division,” the senators wrote. “In both letters the senators raised concerns about potential conflicts of interest in light of the fact that McQuaid was employed at Latham & Watkins until January 20, 2021, and worked with Christopher Clark, who Hunter Biden reportedly hired to work on his federal criminal case.”

Michael Sussmann, of course, was recently named by the Durham investigation as having allegedly misled the FBI about the infamous ‘backdoor server‘ to Alfa Bank, which was a claim echoed by Hillary Clinton herself during the 2016 campaign. Sussman had approached the FBI’s general counsel James Baker in a September 2016 meeting with a tip provided in a personal fashion, as opposed to explicitly on behalf of the Clinton campaign that he worked for. The Washington D.C. federal jury acquitted Sussmann in part because it was presumed that some FBI agents knew he was working with the Clinton campaign.

Lisa Monaco, who was President Obama’s top homeland security and counterterrorism adviser, and former chief of staff for prior FBI director Robert Mueller, was deeply aware of the Russiagate operations during the 2016 campaign. She is implicated as one of the Justice Dept. officials to have given the go-ahead to carry out the FBI raid on Mar-a-Lago.

In a letter to Garland, Senator Hawley pressed the attorney general to ensure that Goodlander would recuse herself from the Durham probe.

“The Clinton campaign’s criminal enterprise includes many individuals currently serving in the Biden administration — and in your personal office,” wrote Hawley. “I am calling on you to set a clear example and instruct Ms. Goodlander, and all of your other employees potentially implicated in the Clinton campaign to formally recuse from the special counsel probe.”

The Department of Justice in November, however, claimed that Goodlander is not a part of the Durham probe. It has not been independently corroborated what role she may have played in the Mar-a-Lago raid.

More importantly, there is a history of Trump targeting in the FBI’s counter-intelligence division. The FBI’s current deputy director for counterintelligence is Alan Kohler, a Russian area specialist who is believed by some as having been involved in deploying foreign nationals to spy on the Trump campaign during the 2016 election.

In May 2019, Mollie Hemingway of “The Federalist” tied Alan Kohler to a 2011 Cambridge conference with Stefan Halper, whom the New York Times reported was ‘handpicked by a seasoned FBI counterintelligence agent out of the New York office.’ Kohler’s official FBI biography places him with the New York field office until he was transferred to London in 2012, where he acted as a liaison with British intelligence.

“Following months of angry claims by journalists and Democratic operatives that the Obama administration never spied on Donald Trump’s 2016 presidential campaign, The New York Times admitted… that multiple overseas intelligence assets were deployed against associates of the Republican nominee,” Hemingway writes. “It is not the first time the Times has revealed widespread spying operations against the campaign.“

“The three agents publicly identified as speaking at that conference on the topic are George J. Ennis, Jr., Alan E. Kohler, Jr., and Stephen M. Somma. Ennis currently serves as the special agent in charge in the FBI’s New York office, according to his LinkedIn profile, and worked closely with Preet Bharara, former U.S. attorney for the Southern District of New York, a virulent anti-Trump activist whom the president fired in 2017,” she continued.

“The public schedule for a 2014 conference led by Halper shows that Kohler also spoke to the same group about the same Russian case on May 9, 2014,” she added.

“Alan Kohler the FBI representative at the United States Embassy in London will talk about the challenges of modern counter espionage: including the case of Anna Chapman and other Russian illegals,” the schedule noted.

The previous deputy director of FBI counterintelligence from 2015 until 2018 was Bill Priestap, who was vital for opening the Crossfire Hurricane investigation of the Trump campaign. Priestap infamously decided that he would not give the Trump campaign ‘defensive briefings’ about Russian intelligence targeting during the 2016 election.

“Crossfire Hurricane was opened as a Full Investigation and all of the senior FBI officials who participated in discussions about whether to open a case told us the information warranted opening it,” the D.O.J. Inspector General report on the FBI’s fraudulent FISA applications reads. “For example, then Counterintelligence Division (CD) Assistant Director (AD) E.W. ‘Bill’ Priestap, who approved the case opening, told us that t e combination of the FFG information and the FBI’s ongoing cyber intrusion investigation of the July 2016 hacks of the Democratic National Committee’s (DNC) emails, created a counterintelligence concern that the FBI was ‘obligated’ to investigate.”

“Priestap stated that he considered whether the FBI should conduct defensive briefings for the Trump campaign but ultimately decided that providing such briefings created the risk that ‘if someone on the campaign was engaged with the Russians, he/she would very likely change his/her tactics and/or otherwise seek to cover-up his/ her activities, thereby preventing us from finding the truth’,” the report adds. “We did not identify any Department or FBI policy that applied to this decision and therefore determined that the decision was a judgment call that Department and FBI policy leaves to the discretion of FBI officials.”

Throughout the FBI’s history of Trump targeting, including by openly biased agents, not a single agent has ever been held accountable. Peter Strzok was eventually removed from the Crossfire Hurricane team after making such comments to his lover/partner-in-crime Lisa Page as “we’ll stop” Trump from becoming president. That seems to be the entirety of the FBI’s serious actions to stop political bias from infecting its operations since Donald Trump first came down an escalator to run for president.

Attorney General Merrick Garland, it should be noted, said at a press briefing that he “personally approved” of the FBI’s overly broad search of Trump’s Mar-a-Lago home for all presidential records — classified, declassified, and even those that fall under attorney-client privilege. Garland was denied a Supreme Court appointment by former President Barack Obama when Donald Trump was elected president in 2016. Articles of Impeachment have been filed against Garland, which may become actionable if the GOP retake Congressional control.

FBI Director Christopher Wray recently said disciplinary action against FBI agents involved in the Trump-Russia investigation has been “slowed down” due to ongoing cooperation with special counsel John Durham.

“An FBI analyst whose assessment was used to label Hunter Biden evidence as ‘disinformation’ wrongly in 2020, according to whistleblower disclosures, was referred for disciplinary action for his role in Crossfire Hurricane just months before doing so, but Wray confirmed during Senate testimony… that the process has largely paused,” the Examiner reported.

“There are a number of people who are currently in our — what we call our Office of Professional Responsibility, which is our disciplinary arm,” Wray said when asked by Sen. Thom Tillis (R-NC) if anyone at the FBI had been disciplined or fired due to the Trump-Russia investigation. “You may wonder why that has not yielded its results yet, and that’s because we are working closely with, cooperating closely with, and assisting the Durham investigation.”

“So that whole process, which is not unusual, has been sort of slowed down to make sure that it doesn’t interfere with the Durham investigation,” Wray added.

Furthermore, there are questions about the more than thirty agents who carried out the raid on Mar-a-Lago. Two of the FBI agents who participated in the raid were named in the exclusive, unredacted search warrant published by Breitbart News. The search warrant was later unsealed by the federal magistrate judge who had authorized it, but the names and identifying information of the agents were redacted in the official document.

Garrett Ziegler, a former aide to then-President Trump’s trade adviser, drew flak for naming the agents and revealing personal information about them on social media. While posts on Truth Social and elsewhere naming the FBI agents were taken down, Ziegler left relevant posts up on Telegram. It turns out that one of the agents was directly involved in a January 6 case.

“I’m proud of providing transparency to the 100 million people who think what the FBI is doing is illegal and sickm” Ziegler said in response to the criticism. “It needs to stop. Providing agents’ work emails is not doxing, nor a violation of 18 USC 119,” he wrote on Truth Social.

Donald Trump took to Truth Social to lambaste the FBI for its perceived harassment of the former president with politicized investigations into purported wrongdoing.

“The FBI has a long and unrelenting history of being corrupt,” Trump said. “Just look back to the days of J. Edgar Hoover. In the modern era, nothing has changed except that it has gotten far worse. Look at Comey, McCabe, Strzok and lover Lisa Page. Check out the brilliantly written but damning I.G. Reports. See what they were willing to do in order to get Crooked Hillary Clinton elected (they failed), and got caught! They spied on my campaign, pushed the FAKE Dossier, and illegally used the FISA Court…”

“The Inspector General said the FBI acted with ‘gross incompetence and negligence’,” he added. ” I was fully vindicated in the Russia, Russia, Russia SCAM, the ‘No Collusion’ Mueller Investigation, Impeachment Hoax #1, Impeachment Hoax #2, and all else. NOW THEY RAID MY HOME, ban my lawyers and, without any witnesses allowed, break the lock that they asked us to install on the storage area that we showed them early on, which held papers that they could have had months ago for the asking, and without the ridiculous political grandstanding of a ‘break in’ to a very storied, important, and high visibility place, just before the Midterm Elections.”

“The whole World was watching as the FBI rummaged through the house, including the former First Lady’s closets (and clothing!), alone and unchecked,” Trump continued. “They even demanded that the security cameras be turned off (we refused), but there was no way of knowing if what they took was legitimate, or was there a ‘plant?’ This was, after all, the FBI!”

It was, indeed, the FBI. Americans can decide for themselves if the Federal Bureau of Investigation has such a sterling reputation that it would not dare to carry out another politically motivated operation against a former president in an effort to rig an election. All rhetoric aside, the bureau’s track record speaks for itself.