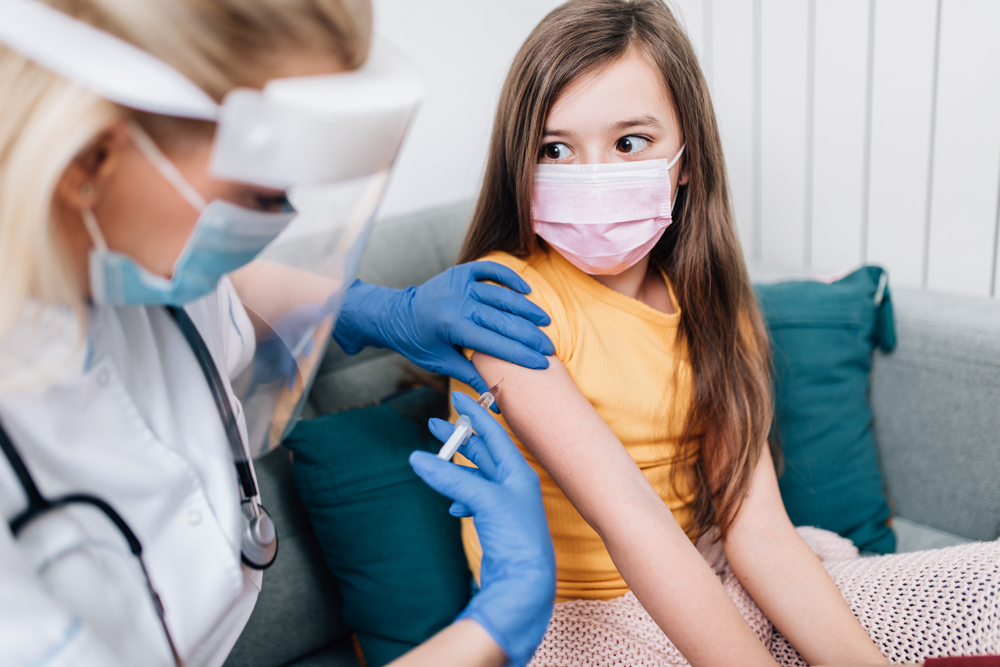 The Food and Drug Administration on Tuesday authorized Covid-19 “booster” shots for small children ages 5-to-11, despite known reported risks from the vaccines and extremely small risk from the virus.

“While it has largely been the case that COVID-19 tends to be less severe in children than adults, the omicron wave has seen more kids getting sick with the disease and being hospitalized, and children may also experience longer term effects, even following initially mild disease,” FDA Commissioner Robert Califf said in a statement.

These “long-term effects” are unknown for both the vaccines and the coronavirus itself. In addition, a recent study showed that booster shots offered “very little” protection for children in the 5-11 age group.

“Pfizer and BioNTech’s two-dose Covid vaccine provided very little protection for children aged 5 to 11 during the wave of omicron infection in New York, according to a study published Monday,” CNBC reported in late February.

“The New York State Department of Health found that the effectiveness of Pfizer’s vaccine against Covid infection plummeted from 68% to 12% for kids in that age group during the omicron surge from Dec. 13 through Jan 24,” the report added. “Protection against hospitalization dropped from 100% to 48% during the same period.”

“The team of public health officials who conducted the study said the dramatic drop in vaccine effectiveness among children 5 to 11 years old was likely due to the lower dosage they received,” the report continued. “Kids in this age group are given two 10-microgram shots, while children aged 12 to 17 receive 30-microgram shots.”

The CDC has conceded that there are heart inflammation risks associated with the mRNA Covid-19 vaccines — particularly for young people.

An Oxford University study earlier showed that the risk of myocarditis, a form of heart inflammation, is greater from getting ‘vaccinated’ with the mRNA shots than from contracting the virus itself. The study was originally published in Nature in December.

“This is the largest study to date of acute cardiac outcomes after SARS-CoV-2 vaccination or infection, the first to compare the risk of cardiac events between different vaccine products and SARS-CoV2 infection and the first to investigate the association between cardiac events and the ChAdOx1 vaccine,” the study stated.

“Our findings are relevant to the public, clinicians and policy makers,” the researchers note. “First, there was an increase in the risk of myocarditis within a week of receiving the first dose of both adenovirus and mRNA vaccines, and a higher increased risk after the second dose of both mRNA vaccines.”

The study included a chart that demonstrated the higher incidence rate of myocarditis for those under 40 years old, particularly after a second Moderna mRNA shot.

The Food and Drug Administration has also issued new restrictions on the single-shot Johnson & Johnson Covid vaccine. The Johnson & Johnson shots are now limited to adults 18 years and older or for whom other COVID-19 vaccines are deemed not accessible or clinically appropriate due to the risk of blood clots.

“The FDA said its analysis had determined that the risk of thrombosis with thrombocytopenia syndrome after the administration of the shot warrants limiting of the authorization,” CNBC reported.

“We recognize that the Janssen COVID-19 Vaccine still has a role in the current pandemic response in the United States and across the global community,” said Peter Marks, director of the FDA’s Center for Biologics Evaluation and Research. “Our action reflects our updated analysis of the risk of TTS following administration of this vaccine and limits the use of the vaccine to certain individuals.”

The FDA had confirmed 60 cases, including 9 deaths, of the “rare but serious” blood clotting condition.

“The FDA temporarily paused the administration of the Johnson & Johnson COVID-19 vaccine last year after several reported cases of blood clotting,” UPI News noted. “At the time, all six cases were found in women between the ages of 18 and 48. At least one died.”

An MIT study also found that there was an increased risk of heart inflammation among 16-39 year-olds in Israel.

“COVID-19 vaccination was ‘significantly associated’ with a 25% jump in emergency medical services (EMS) for heart problems in 16-39 year-olds in Israel, whose vaccination rate is among the world’s highest, according to a peer-reviewed study by MIT researchers,” Just the News reported.

“While not establishing causal relationships, the findings raise concerns regarding vaccine-induced undetected severe cardiovascular side-effects and underscore the already established causal relationship between vaccines and myocarditis, a frequent cause of unexpected cardiac arrest in young individuals,” the study says.

In October 2021, some European countries suspended authorization for Moderna vaccines due to the increased risk of heart inflammation for young persons.